What happens after the surge? WBUR health and science reporter Carey Goldberg interviewed Dr. Kevin Tabb, president and CEO of Beth Israel Lahey Health, about the upcoming challenges for health care in Massachusetts after the surge in coronavirus cases ends. She and Dr. Tabb also answered questions submitted by the public about the what could happen next as we deal with the pandemic. 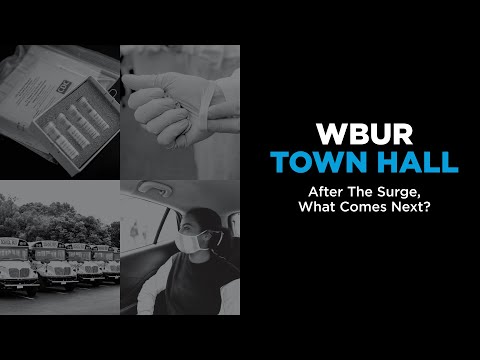 Visit WBUR CitySpace online or sign up for our events newsletter to get updates on future town halls.

On whether or not we're at the peak of coronavirus cases or hospitalizations in Massachusetts: 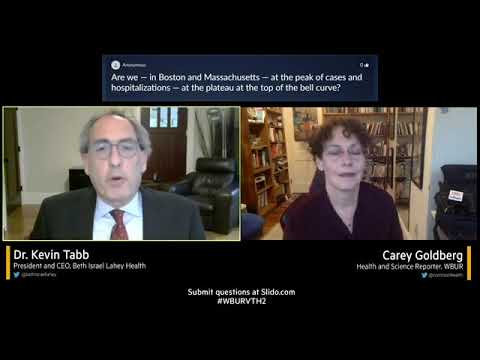 I guess I'll answer that question the way that I'm going to have to answer many questions, which is: we don't know exactly. We have thoughts about where we are going to be, but the truth is that we will only know that we're at the peak when we've passed the peak. And I don't think that that's actually happened.

That being said, we do see a number of things that encourage us and would give us reason to believe that we are getting close to that point at which we won't see further significant rises ...

"The surge" simply means the cases are increasing day over day. And we've been in the surge — in other words, cases increasing day over day — for some time now. "The peak" means that we will no longer see more cases tomorrow than we saw today. And we're not quite there yet ... but what we do see that gives us hope is that the percent increase in the number of patients we see on a daily basis has been mitigated a little bit.

On the need for people to still go to the hospital for urgent non-coronavirus health issues: 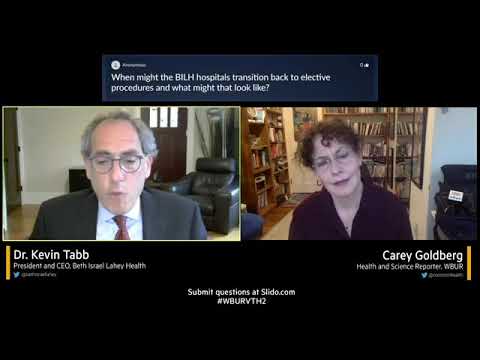 We have ways of protecting people. We have good protective equipment. We've got separate beds and wards and other things.

... We're seeing a disturbing trend of a huge drop ... in the number of heart attacks that we're seeing [at the hospitals]. I don't think that that's because people have all of the sudden stopped smoking and their cholesterol levels are normal. I think the heart attacks are occurring, but people are just not coming into the hospital.

We've seen a 70% reduction in people coming in for evaluations of new cancer. I don't think that is because new cancer is not occurring. I think people are frightened to come ...

We need to get the word out that we are there to take care of everybody that needs that care. We can provide that care and people need to know that.

On the how the coronavirus has affected communities of color: 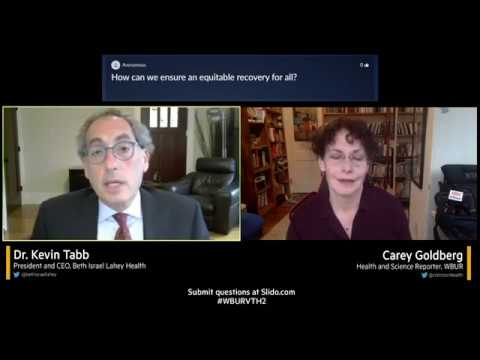 So let's start with the facts. There is no question that this disease strikes people or communities of color disproportionately to a huge degree. If you do walk into any one of our ICUs, you are struck by the fact that upwards of 40% of the people that are intubated and in our ICUs with COVID are people of color. And that is not the same percentage that we would typically see within our ICUs.

You would be struck by the fact that if you were to ask what neighborhoods and towns they come from, they disproportionately come from a small number of neighborhoods, of cities and towns around the state, and are not spread equally across this state.

We know that that's true for a number of reasons. First of all, these are people that don't have the luxury, many of them, for their jobs to use Zoom and work from home. They need to go out into the workplace and are exposed that way ... We know that people of color have what we call comorbid illnesses — things like cardiovascular disease and diabetes and other things — at a higher level than others that puts them at risk.

We know that what happens with transmission of this disease is it's really important to be able to isolate if you are sick. Well, if you have a big house and you get sick, and [have] a family there, and you can close off a room or a bathroom and say, "I'm not going to be in contact with anybody else," that's great. But if you live in a small apartment or a multi-generational home, you can't do that.

On how we get back to normalcy and protect against a resurgence of the virus: 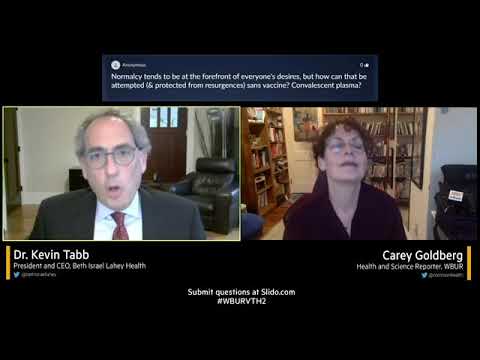 It's going to take concerted effort to work on scientifically valid treatments. Not what our gut tells us, but using real science to understand what works and what doesn't. And that unfortunately takes time and patience.

Any one of those things is a massive effort. You think about combining them all together, that is even bigger. But it's going to take all of those things for us to do it.

Now, I actually believe that we have the ability to do these things if we put our mind to it. Let's take as an example contact tracing. We've got to ramp that up in a huge way ... But it will take thousands and thousands of people working at it.

In the 1930s, the WPA was created — the Work Projects Administration — and they worked on infrastructure. I think we're going to need something similar in this country. It's an economic time that in fact may be similar to the 1930s, but instead of a regular infrastructure, we need to work on a public health infrastructure. And if we were to devote ourselves in the way I think that occurred then, we could beat this thing.

This article was originally published on April 17, 2020.