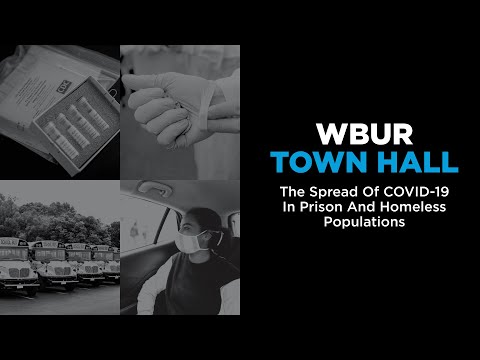 WBUR reporters Deborah Becker and Lynn Jolicoeur discussed the effect of the coronavirus pandemic on prisoners and people experiencing homelessness in Massachusetts. They were joined by Lizz Matos, executive director of Prisoners’ Legal Services of Massachusetts and Dr. Jim O’Connell, president of Boston Health Care for the Homeless Program.

On how people who are homeless but unsheltered during the coronavirus pandemic are being tested and tracked: 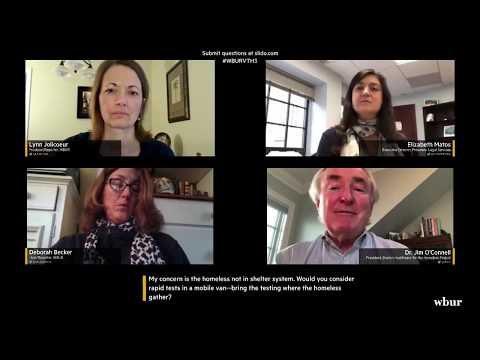 Dr. Jim O'Connell: There are many paradoxes and ironies in this epidemic. One is that I think if you're in a shelter, you're more likely to get the virus than if you're living outside.

So many of our street folks, for example, do not want to go anywhere near a shelter because they think that's where they will get sick. And interestingly, up until now, we've seen very few street people come down with COVID positivity, and most of them have been tested by the hospitals when they hit the emergency room. And I can certainly tell you, so far we know of no street person — with the exception of one —who's come down with that. And that's when he went home to stay with his family for a while, and the family had it.

I talked to my friends in L.A. — and think of L.A., where there are 46,000 people living on the streets in tents and everything else. They know of, at this point time, only 33 ... homeless people that have COVID. So they are not seeing the 46% [of infection] the way we are ... I'm almost reluctant to say this, because in many cases people living in their tents are isolating much better than people who are forced to go to shelters.

So we'll have a lot to learn out of this. I share ... concern for the street population. They're ordinarily the ones who die three times the rate of people living in the shelters. But this is all an upside down world now. And I have a feeling they know they're safer staying outside, separated from people, than coming in. And I'm sorry to say that. It's almost like I don't want to say it because it feels so upside down.

On the status of prisoners who are in lock down due to the pandemic: 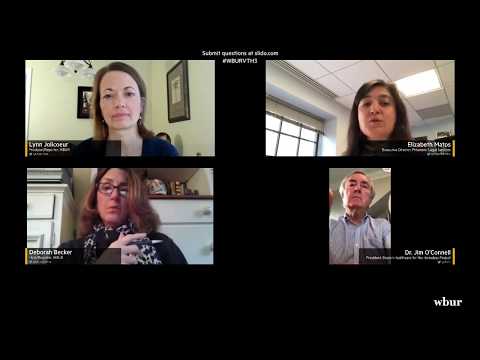 Elizabeth Matos: In the [Department of Corrections], I think we right now we're mostly hearing about how frustrated people are because they have been on lockdown. Twenty three, 23-and-a-half hours per day without going outside for a month or longer now.

And people are really starting to deteriorate mental health-wise, and they're extremely stressed out about whether or not they have COVID, and have seen people being sick around them. So right now, the DOC is starting to test prisoners in all of the state facilities. I think people feel somewhat grateful for that. Although other people are actually refusing tests because they're afraid that they'll be placed in solitary confinement.

On striking the balance between public health and public safety when releasing people from prison: 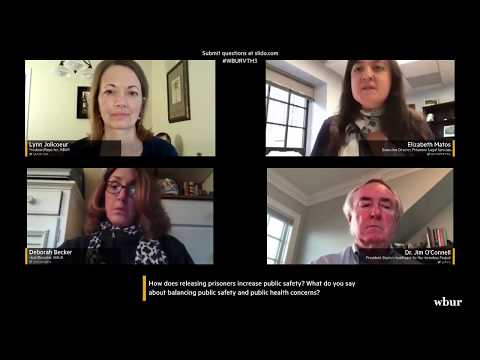 Matos: "I think there are a lot of myths and misinformation about how this gets done. And one prevailing idea has been, 'Well, how could they possibly figure out who to release in the sentence population?' But we have to remember, and I think this is one of the reasons why the Supreme Judicial Court is focused on the parole board.

And again, the Department of Correction and the parole board do risk assessments all the time on individuals who are incarcerated. So they know who is a low public safety risk.

And that, also, I think there's a misunderstanding that "low public safety risk" means people who have not been convicted of "violent offenses," which can be possession of a firearm. Just to clarify that there's a ... big range there.

So the elderly, in particular, are some of the lowest risk people in the system. And then you add to that infirmity ... There are many people who are very low public safety risk and should be assessed for release on that basis. Just because someone has been sentenced doesn't mean that they're not appropriate for release.

On the fluidity between prisons and homeless shelters: 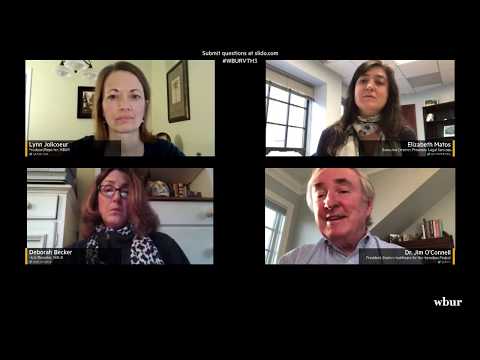 O'Connell: For years, the intersection between jails and prisons and homelessness have been getting closer and closer. And I know, not so very long ago, if you had asked someone at one of the main shelters — like the city shelter at Pine Street — when a new person shows up at your door, about 50% of the time, the place they had slept the night before was in a jail. So that transition from jail to homelessness, just like from homelessness to jail, is a pretty fluid one. I think we have a big challenge about how we would work to coordinate and care for folks.

And one thing that has hampered us, which I'm sure Lizz would agree with, is we can see somebody in a shelter clinic who has just spent the last five years in jail, but we will have no idea what happened with their health care, what was going on. And there is no housing available for them, so there are really kind of stuck going to the shelter with no support except whatever can be done.

And I suspect the same problem hits the shelters, where they're seeing so many people who are suffering from severe mental illness, really critical medical problems and substance abuse problems, and ... the prison is the one who then has to take care of that person. And it's very, very difficult.

So I think there's a huge world that we could all learn from. And then I certainly underscore what is most uncomfortable about all of this, as you all know, is that this pandemic — like so many other things, when we watch people in homelessness and prisons — is just pointing out the, you know, the sort of structural racism in our society, that poverty plays a huge issue. And ... there's been a glaring light shown on this during this pandemic.

Correction: The video was edited at 3:29 and 42:15 to insert correct photos. Due to technical errors during the live presentation, two photos were displayed that did not accurately depict what the presenter was discussing. We regret the errors.

This article was originally published on April 22, 2020.