The race for the U.S. Senate in Massachusetts is getting heated, with Congressman Joe Kennedy III reviving an old charge against the incumbent, Sen. Ed Markey, that he spends too little time in Massachusetts.

This remains a puzzling primary race for many Massachusetts Democrats: a contest between two solid progressives who agree on just about every issue. But now, amidst the pandemic, the attacks are getting sharper.

This month, Kennedy launched his first campaign ad, presenting himself as an advocate for working Americans during the pandemic. 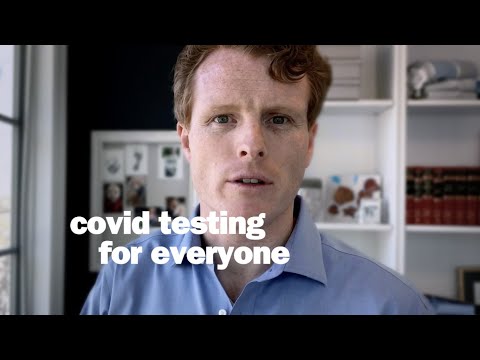 "That's why I'm fighting for life-saving medical equipment, COVID testing for everyone, direct cash payments and paid sick leave for all," Kennedy says in the ad, which is airing across the state and on digital platforms.

The ad features images of Kennedy on Zoom calls, a necessity as his campaign adapts to the pandemic. Markey, too, has adapted, pivoting his campaign and Senate work to an online reality. In a recent Zoom news conference, Markey promoted a bill that he is sponsoring with Sens. Bernie Sanders, Independent of Vermont, and Kamala Harris, Democrat of California, that would send American families as much as $4,000 a month in direct cash payments to help them through the current economic crisis.

"We're back to the Great Depression," Markey said. "Herbert Hoover didn't understand the magnitude of the response which was necessary. We're at that same point right now. Donald Trump does not understand. So we're introducing a Rooseveltian-level response."

Advocating for generous cash payments is just one example of how similar Markey's and Kennedy's policy priorities are. In a recent interview with WBUR, Kennedy talked about his own proposed assistance for families.

"Back in early March, I proposed a series of reforms in order to help families navigate through this, and direct cash payments was one of them," Kennedy said.

They agree on most other issues, including the Green New Deal, which Markey co-sponsored with Rep. Alexandria Ocasio-Cortez, D-N.Y., and which Kennedy supports. They also see eye to eye on Medicare For All, immigrant rights, stricter gun control, and lots more.

But lately, in an effort to sharpen his case against Markey, Kennedy is accusing the incumbent of not spending enough time in Massachusetts.

"You can't afford to have absent leadership," Kennedy told WBUR. "You do have to be here. And you have to be here because you have to be listening to the concerns and causes of the people around your state. It is awfully hard to know that, to see it and to feel it if you're just not here."

In response to that charge, Markey accuses Kennedy of cheap politics in a moment of national crisis.

"No one should be playing politics with the coronavirus pandemic," Markey told WBUR.

The charge that Markey spends more time at his home in Chevy Chase, Maryland, than at his family home in Malden, has come up in previous elections. Markey has rejected it in the past, and he rejects it now.

"As you talk to me, I'm here in my dining room in Malden in the house in which I grew up," Markey said. "It isn't just where I live, it's how I live. It's the people who I fight for every single day."

As if to illustrate that point, as people were instructed to stay home over the last few months, Markey has featured his home in Malden more often on social media.

If Markey and Kennedy have similar politics, they have very different backgrounds. Markey is the son of a milkman, while Kennedy is, well, a Kennedy.

The Markey campaign touts a long record of promoting progressive causes, something Bill Curry witnessed firsthand. Curry was a domestic policy advisory to President Bill Clinton and in the 1980s he was the political director of the nuclear freeze movement. He says Markey, then a congressman, was an important ally.

"What Markey does today with Rep. Ocasio-Cortez on the Green New Deal is exactly what he was doing in 1984 with those of us in the nuclear freeze [movement]," Curry said. "He was getting way out in front on an issue the public would eventually embrace."

That long record should help Markey in this election. On the other hand, he's 73 and has been representing Massachusetts in Washington since before the 39-year-old Kennedy was born. Curry says that gives Kennedy a powerful message of generational change within an aging party.

"People know that the Democratic Party has failed to renew itself," Curry said. "Kennedy looks like the future they've been dreaming of — and his name is Kennedy."

A few recent polls show Kennedy leading Markey, though they suggest lots of voters could still change their minds. The two candidates will have a chance to make their cases, and to face each other, in a live debate co-sponsored by WBUR in Springfield on June 1. It will be their next opportunity to debate and disagree — even if they agree on most of the issues.