Music isn’t the only art form that captivates Boston Symphony Orchestra assistant concertmaster Elita Kang. The violinist has been enchanted by classical ballet since childhood — particularly the magic and elegance of Tchaikovsky’s “Swan Lake.” With the BSO’s spring concert season canceled and Tanglewood moved to virtual programming because of COVID-19, Kang took the opportunity to act on her long-standing dream of performing the ballet’s beloved Act II pas de deux. She then reached out to BSO harpist Jessica Zhou to collaborate on what would soon become “White Swan” — a 4-minute video ballet featuring an intimate, romantic duet between Boston Ballet principal dancers and real-life partners Paulo Arrais and Derek Dunn. The piece is set to the sound of a twinkling harp and the sustaining melody of a violin, played by Zhou and Kang respectively.

“When I had this idea, it was, at first, a wild fantasy,” says Kang. “I knew nothing about the technical side of audio engineering and things like that.” 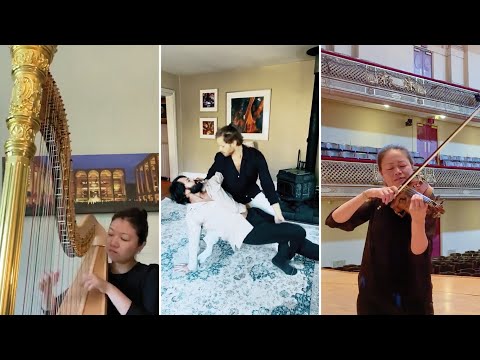 Once Zhou agreed to participate, friends of Kang’s at the Boston Ballet’s orchestra put her in touch with Paulo Arrais, who agreed to choreograph and perform in the piece alongside Dunn, as the pair is sheltering-in-place together. “It was like one stroke of luck after another,” says Kang. A veteran “Swan Lake” performer, Arrais was just as enthusiastic about the idea. “It’s always been a dream of mine to collaborate with the BSO,” the dancer says. “When [Kang] said we’re going to play the ‘White Swan’ pas de deux from Tsaichovsky’s ‘Swan Lake,’ I was even more excited... It’s actually my favorite adagio in the whole ballet.”

Once all four artists were on board, practicing and recording were underway. The first step was for Kang and Zhou to separately record each part of their duet — a process worlds away from the BSO’s usual rehearsals, where musicians can interplay with one another and let their melodies mingle. Zhou recorded her harp section from her hideaway in the Berkshires, while Kang decided to take advantage of the unoccupied Symphony Hall to film the violin piece — adding resonance and grandeur, while hearkening back to a more normal time for the arts. Kang contacted the hall’s head of security well in advance, and the stage was sterilized before and after her visit.

“It was weird and wonderful to just be back on stage for the first time in two months by myself,” says Kang. “I’ve been in the BSO for over 20 years and the hall is such an integral part of who we are as a collective group of musicians; it informs so much of how we make our sound...It was really wonderful to just play on stage and to play out and to really enjoy that sonority.”

Arrais and Dunn had to transform their talents as well — now dancing without mirrors, expansive studio space and the discerning eye of an outside choreographer. For most of the 25+ hours the pair spent rehearsing, they were confined to Dunn’s apartment — marking through the material to master the coordination and hand placement during partnering sequences, occasionally venturing out to the grassy backyard to turn and jump.

“We created material most of the time without trying it full out — meaning, doing the steps with full energy and full force, covering space as I imagined in my mind,” says Arrais. “It was very different. We only did the duet full out, the way we wanted to record it, on the day of the recording. Prior to that, we did it bit by bit.” Even with these challenges, Arrais still found choreographic creativity — drawing inspiration not only from the original pas de deux, but also from his relationship and the uncertainty amidst this global health crisis.

The dancers also had to adapt to the nuances of choreographing and performing for film versus on stage. Arrais viewed the camera as a way to guide the viewer’s eye to focus on certain aspects of the piece, concluding that the breadth of a stage gives the audience more freedom to look where they please. Dunn says, “It forced us to learn new skills, such as what angle looks best for the camera and how many takes we need to make it look like a smooth video once we put all the clips together, so it took a different part of our brain.”

Despite the hurdles of the occasional poor internet connection and all parties recording strictly on iPhones, the result is seamless. Kang was not only surprised by the relative ease of the collaboration, but also by the intense emotion she felt as she saw the project come together. “I was so teary and so intensely grateful. It made me realize how much I miss doing what I do,” Kang says.

The video begins with the camera panning across a blue sky before it peers into an apartment window (which belongs to Boston Ballet soloist Isaac Akiba, who coincidentally lives in the same building as Dunn). It invites the viewer to be a voyeur into the relationship between the two dancers as they express their love through movement, floating gracefully amidst household objects such as kitchen pots as a seemingly indifferent cat perches on a windowsill — a pleasant surprise during their final shot. The viewer can feel the intention behind Arrais’ choreography and camera work, as well as the true-life passion and intimacy between the partners.

“I feel very proud that I created this male duet with my boyfriend about our loving relationship,” says Arrais. “I think, as a creator and a homosexual man, it’s my duty to try to bring light to my community.”

Released for public viewing on May 28, “White Swan” illuminates the enduring presence of the arts through this pandemic and serves as a powerful example of representation in a classical medium.

“If we can put art out into the world right now, hopefully, that's something people can react positively to and remember that the arts are still alive,” Dunn says.

“White Swan” can be viewed on the Boston Symphony Orchestra and Boston Ballet website.