When commissioned to create a mural in support of the Black Lives Matter movement, artist Ricardo Gomez (also known as Deme5) set out to incorporate words that represented both an emotion and an action. After contemplating with his significant other what messages they felt needed to be expressed to the community, they settled on three words: love, respect and compassion.

“I hope people are reminded of how we should treat one another,” says Gomez. “‘Rules of engagement’ is a term used to describe military force, but what if it was changed to a blueprint on how to treat people compassionately, respectfully and with love?”

“Rules of Engagement” breathes life into a stretch of pavement at the corner of Barlett Station Drive in Roxbury, spelling out this powerful mantra in bold canary yellow block text as turquoise triangles interplay between each letter. When viewers look closer, however, a second statement can be seen written in fuchsia script, symbolically intertwining with the first. “To take it further and to honor the ongoing fight of African Americans in this country, we embedded ‘black life matters’ into each word,” says Gomez. “In the end, you have three messages, the two listed above and finally, ‘Love black,' Respect life,' and 'Compassion matters.’”

The artist was first asked to create the mural by Nuestra Comunidad Development Corporation’s executive director, David Price, who first became acquainted with Gomez’s work through a dynamic painting the artist made of an Orange Line train on one of the brick buildings in the late Bartlett Yard, a former MBTA bus maintenance facility-turned informal outdoor art gallery. A housing complex called Bartlett Station, which is part of Nuestra Comunidad’s portfolio and is set to feature a community art park called the Oasis @ Bartlett, now sits in the building’s footprint. “Rules of Engagement” was commissioned to be painted near the building as a nod to the property’s artistic ties and commitment to showcasing local talent. Gomez was also asked to craft a smaller-scale work for the lobby and the building’s logo is, fittingly, an illustrated version of the artist’s train mural.

At the time of the commission, another street mural celebrating Black Lives Matter was well underway near Nubian Square. Despite the shared intention behind both projects, Gomez didn’t want to forego the opportunity to participate in the movement through his art.

Gomez teased the new project over Instagram in late August with a photo of himself with his back to the camera, the golden hues of the mural spilling out on either side, but it took roughly three weeks to complete the project — during some of the most scorching days of the summer, no less. On a few days, however, he had some help from his mother, daughter and sister as well as his friend, filmmaker Mushen Kieta, who documented the mural’s creation. 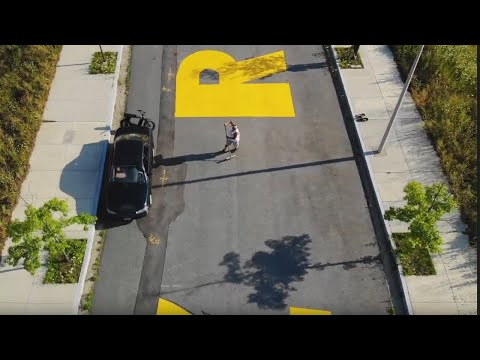 Since starting out in the industry 30 years ago, the artist has expanded his talents to everything from painting food trucks, to creating unique installations for corporate buildings, to designing logos. But most of all, Gomez has set out to show his city what can be done with just a can of spray paint — tapping into his roots in graffiti to create bold and compelling public works. “My passion for painting and creating unique characters and bold letterforms segued into realistic portraits and bold typefaces,” says Gomez. “I’m glad the city of Boston has started to embrace what previously had been undervalued and quickly disposed of.”

The creative got his start going door-to-door to stores and other local businesses, approaching owners with an idea and mock-up sketch for a mural. Now, Gomez’s work has brought life to walls all over Boston — including in restaurants, autobody garages, barber shops and the Chez-Vous roller rink — but many might recognize the artist from his iconic “Roxbury Love” mural on Warren Street that featured a smiling Nelson Mandela, which was recently demolished to make space for new housing. “Rules of Engagement” evokes a similar sentiment, connecting black culture with love and depicting themes that are akin to Mandela’s leadership.

For now, the mural will adorn the asphalt indefinitely, but like “Roxbury Love,” it may eventually give way to fresh pavement and new development — a rather common occurrence in the public art world. Even considering the temporary nature of street art and his expansion into other areas of art and design, Gomez will always be most excited to make use of his graffiti expertise and paint for the people. He says, “The rush I feel while painting a large wall for everyone to see never gets old.”