Anyone who loves film festivals will tell you they’re about more than just movies. When people gather to share common interests and enthusiasms, that’s how communities are created. Since 1998, the Roxbury International Film Festival has been holding screenings, panel discussions and celebrations at the Museum of Fine Arts, Hibernian Hall, Haley House Bakery Café and other sites around the city. But how do you keep the community going when public health prohibits you from getting together?

Under the leadership of festival director Lisa Simmons, RoxFilm has put together the most aggressive online event schedule I’ve seen since COVID-19 sent us all to our rooms. With daily lunchtime script readings featuring local actors and writers, filmmaker hangouts and even a virtual dance party, the 22nd annual Roxbury International Film Festival is determined to keep us together even if we must be apart. From Wednesday, Sept. 30 through Monday, Oct. 5, dozens of features and shorts will be available from the comfort of your home, along with a bevy of post-screening Zoom Q&As and other assorted activities.

For a film festival moving into your living room, there’s perhaps no more apt an opening night attraction than “The Sit-In: Harry Belafonte Hosts The Tonight Show.” This entertaining and informative documentary directed by Yoruba Richen takes us back to February of 1968, when the streets were full of unrest during a bitterly contentious presidential election year. (I’m so glad we’ve moved past all that.) Wanting his program to address current events but also shrewdly understanding the limits of his middle-of-the-road persona, Johnny Carson invited Harry Belafonte to host “The Tonight Show” for a week, allowing the calypso-crooning civil rights activist to choose his own guest list, which is how Ed McMahon, Nipsey Russell, Leon Bibb and Paul Newman all ended up on the couch together, yukking it up with the Rev. Martin Luther King Jr. 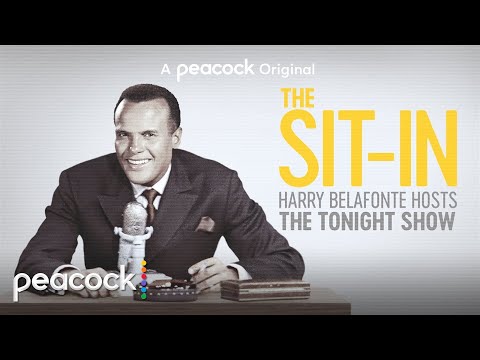 Belafonte, interviewed here at a hale and hearty 93 years young, used the opportunity to introduce Carson’s middle American audience to a wide variety of African American entertainers, and in a lot of cases, they were the first Black people folks had ever seen on their TVs. He reflects movingly upon the responsibility of bringing these artists into people’s homes, into their bedrooms even, during an era when they’d be otherwise unwelcome, to say the least. Aretha Franklin, Lena Horne, Dionne Warwick, Wilt Chamberlain, Diahann Carroll and Bill Cosby all stopped by the show, with even Bobby Kennedy on hand for an evening.

Despite record ratings, NBC’s cheapskate policy of re-recording over videotapes left only small segments of the MLK and RFK episodes surviving today, so a lot of the documentary depends on interviews with performers and historians, along with some fine cultural context from late-night comedy chronicler Bill Carter and former Boston Globe critic Wesley Morris. Mere months after their appearances on the program, King and Kennedy would both be shot dead. Late-night television wouldn’t see another Black host until Arsenio Hall, 21 years later.

RoxFilm’s other selections this year span genres from the post-apocalyptic adventure “A Knight's Tour” to the experimental true-crime saga “Wisper.” Maybe the biggest laughs to be had are at “White People Money,” the latest farce from Chicago’s prolific producer-director Mark Harris, the Windy City’s answer to Tyler Perry. This extremely broad comedy stars Drew Sidora and Barton Fitzpatrick as a financially strapped couple from the South Side who win a billion dollars from MacKenzie Bezos and then try to hide the windfall from their friends and family, worried that every distant relative is about to turn up on their doorstep looking for a handout. Honestly, I could have done without Harris’ reliance on cartoon captions and wacky sound effects, but it’s all worth it for Dawn Noel’s hilarious performance as the overcompensating white sister-in-law who “didn’t put raisins in the potato salad because I saw in a Facebook meme that you people don’t like that.”

A whole other side of Chicago can be seen in “Thee Debauchery Ball,” David Weathersby’s documentary about an annual BDSM-themed house music dance party where everybody’s free to let their freak flags fly. Cheerfully blowing up stereotypes about Black sexuality, the film becomes a moving chronicle of artists and enthusiasts working together to create safe spaces for the curious to explore. Despite the whips and shiny boots of leather, it’s all upbeat body positivity here, a feel-good movie about feeling good, and the festival’s touting a virtual afterparty hosted by artists loveaftrsex and Camden Lee. I can’t wait to see how they do some of this stuff on Zoom.

The finest film I saw in advance of the festival is multimedia artist and Emerson College fellow Daniel Callahan’s debut, “Come On In.” The closing night feature stars the scarily talented producer-director (who also wrote the script, co-edited and provided some of the music and paintings featured in the film) as an aspiring artist who crashed and burned out in California, moving back home to Boston with his mom and taking a job as a telemarketer. One day he dials a number that seems to know him too well, a mysterious voice that coaxes, coerces and becomes something like his life coach. She invites him to a job interview, but it isn’t what it seems.

Actually, nothing’s what it seems, and reality itself soon seems to be fraying around our failed artist. Callahan teases out the little tendrils of story with tremendous respect for the audience. Maybe too much? I kept thinking the movie was going somewhere more conventional and genre-oriented, only to be pleasantly surprised that this is a purely psychological journey. Callahan gets a lot of bang out of very few bucks, making smart use of match cuts and nifty, lo-fi film grammar tricks far more impressive than expensive special effects would have been. (He even somehow manages to make the Orange Line evocative.)

It’s such a pleasure to watch a first feature that’s been so well-thought-out, to take note of a young filmmaker who has clearly studied and understands the medium. Movies like “Come On In” are the reason I love covering film festivals, and here’s hoping that next year we can once again experience such discoveries together.