If it weren’t for COVID-19, Boston’s preeminent showcase of films by and about Black, Indigenous and people of color would have just wrapped up. As it stands, the Roxbury International Film Festival (RoxFilm) will instead run its 22nd year Sept. 30-Oct. 4, with exact details for in-person versus virtual to be determined. In advance of the fall festival, six RoxFilm alums share what they are working on now, the value of RoxFilm gatherings, and the overall importance of independent filmmaking by people of color during the overlapping pandemics of the disproportionate effects of COVID-19 and protests for racial justice.

Since premiering his first documentary with RoxFilm in 2011, Noube Rateau has become an expected presence at the festival, either with a screening of a new film or to take in the scene. Last summer, he and co-director William Medero screened “Protect, Serve & Care,” a documentary investigation into police-involved shootings directed at people of color. Rateau says his film “predicts exactly what’s going on now” in relation to the murder of George Floyd. It frustrates him that the documentary “explains why it happens, but it continues to happen.” All of Rateau’s films examine what he calls “really serious social issues” like drug addiction and gun use in Boston as well as on a national scale, including voices from all sides. “Protect, Serve & Care,” for example, includes footage with Boston Police Commissioner William Gross. As part of his current work-in-progress about immigration, “I Am You,” Rateau has been shooting scenes at protests organized by Black Lives Matter and other demonstrations. He says he’s particularly interested in the difference between an African American experience of “forced immigration” and other immigrants who identify as Black, as he does as a Haitian American. While filming, Rateau has observed that “as much as politically we’re divided… in essence, everyone is kind of united in terms of George Floyd.” “Protect, Serve & Care” went on to win a 2019 New England Emmy for best documentary. 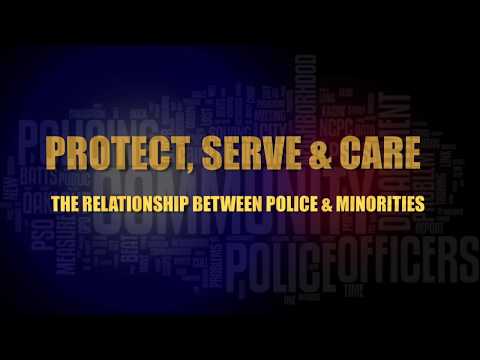 As Angélique Webster weighed her options for her thesis film as part of Vermont College’s MFA program, she recalls thinking, “I’m interested in stories that are real, that are passionate, that haven’t been told. I had one of those stories. Why not start with me?” She went on to make a delicate yet searing nonfiction short about her childhood experience of abuse at the hands of a priest, as told by her mother. “Respect & Love” screened at Roxbury in 2018 and is still playing festivals. Webster has been blown away by her film’s reception “from the not so obvious folks.” A white male friend surprised her by writing a poem that she says captured her documentary’s emotion exactly. “We have no idea who [people] are or what they’ve been through,” she says. “People are not what they say they are. They are what they do.” Cameras can expose the truth. She recently started collaborating with historian Gloria Hall on a project about Worcester’s civil rights struggle based on oral histories collected by Hall. As a somewhat newcomer to Worcester, Webster says she has wondered about its African American history and where she fits in. “Any representation that people see [of themselves] does something for your soul,” she says. Hearing similar experiences deepens that connection “and makes our community larger.” While waiting for RoxFilm to resume this fall, her main piece of advice is to see more independent film, “I’m amazed by what’s out there.”

Multimedia artist Daniel Callahan’s debut feature film, “Come On In,” will have its world premiere at the rescheduled festival this fall. Callahan says his film is about “the inner workings of a Black mind.” Specifically, his mind. The kernel came after a period of crisis, where he felt trapped by his interior life. As an introvert, one’s mind can be fascinating and “can also become a very scary place.” If “Get Out” or “Sorry to Bother You” sound like similar concepts, good, except Callahan points out he locked his script before seeing either. Yet, to him, those movies signal positive change. “We have been told there is not a market for this. We’ve been told [if our films are] not about gang violence or police brutality somehow it’s not an authentic Black story and not important.” With that project wrapped in late 2019, Callahan says the multiple pandemics of 2020 at first left him without creative impetus. He realized maybe it was his time to listen. He set up Zoom meetings to ask people in the Boston Black community how they were handling COVID-19. Once George Floyd protests started, he began filming those as well. He’s collecting this footage into a work-in-progress called “The Color of Corona” to preserve an archive on the perspective of Black people from all throughout the African diaspora. Because as Callahan says, “I’ve found people like me are rarely there.” The fact that he has an entirely different ongoing project about painted masks — ones that bring the inside out to a state of “radical vulnerability” — is almost too much for him to take in right now. Instead, he’s got an eye on a better future. There might be a lot of awkward dancing, but the beauty he sees is that “we all need each other to make this work. There’s no one who can’t be a part of this.”

Documentarian, writer, director, teacher, mentor. When it comes to film, Nerissa Williams Scott has been all of the above and more, landing most comfortably in the role of creative producer. Williams Scott most recently helped Daniel Callahan bring “Come On In” (see above) to fruition, and the sci-fi Afrofuturist short “Ancestry: The Beginning,” a prelude to what Williams Scott hopes will one day be a longer project, screened at RoxFilm in 2016; another short, “High Watch,” in 2013. In “High Watch,” people from various backgrounds and faiths come together in prayer around a young woman with cancer. Even though COVID-19 closures gave Williams Scott a “much-needed reprieve” (until the Lloyd protests began), Williams Scott says every day is a living version of “High Watch.” “I’m constantly in prayer. I pray without ceasing, I stop and pray for this and talk to the lord about that.” Williams Scott says RoxFilm is the first film festival that “accepted me on my terms. It allowed me to recognize that I too can grow in this medium.” In addition to working on a documentary-in-progress about the (safe performance venues for African Americans during Jim Crow), Williams Scott is helping students from Emerson and UMass Boston and put together the first-ever New England Cell Phone Film Festival for young people ages 15-24. With films due August 23, the mission is to nurture future filmmakers and give them something to do over the summer. But it’s also in recognition of videos like the one 17-year-old Darnella Frazier shot of Minneapolis police officers kneeling on George Floyd’s neck. “Darnella had no idea she was going to shoot a film that changed the world,” says Williams Scott. “I was proud of that girl… she didn’t realize she did it but do you realize she did it?”

Crosby Tatum says he has been searching eBay for bulletproof vests and Kevlar helmets. He’s working on a video diary of the protests and wants to be safe while getting all sides of the story. “There’s such an air of unpredictably. Any minute someone could pull out a gun. That gives me pause,” he says. He’s been filming every weekend since George Floyd’s murder, including a right-wing pro-police rally. For Tatum, the reaction to Floyd has caused an unprecedented shift within an already dynamic Black Lives Matter movement. “There are ordinary people out there protesting and explaining their feelings about what’s happening,” he says. While it’s great to have allies, he says, “we need to hear the pain and sorrow of people of color and the people left behind the system” if we’re going to move forward. Tatum recalls a firsthand experience with excessive police force and says it brings perspective to his storytelling. He also credits RoxFilm with “changing his life,” saying it was almost “like a school for me.” From showing his own work (“Confused… By Love” 2017), to meeting influencers like Matthew Cherry (2019 Academy Award winner for “Hair Love”), or seeing films from around the world, he says the take-home for his filmmaking has been, “Let’s think differently, do things differently, go out of our comfort zone, independently without fear, without remorse. There’s no rules to this game.” Like most independent filmmakers, Tatum keeps a day job. His happens to be at a hospital which through COVID-19 has been “an elevated ride of a roller coaster of emotions.” In addition to documenting the protests he an adaptation of a one-man play and a web series in development. He says even with this pandemic, “I’m not going to let go of my dreams.”

Mothers are like mirrors. Jacarrea Garraway feels that sentiment strongly enough to have made a film by that name. Her autobiographical fictional short, finished while a film student at NYU, premiered at last year’s Roxbury International Film Fest. It depicts the subtle tension between a mother and daughter when the daughter (Garraway in a version of herself) returns home from college. In real life, her mom went straight from being a kid into being a mother by age 20, Garraway says the two were on different trajectories. She wanted her film to show both perspectives in this nuanced relationship. “I got to know my mom a lot better as a person once I started into adulthood,” says Garraway. In the film, simple conversations about who ate what from the fridge bubble with an undercurrent of anger and impatience, and also with a frustration over how to express love. Garraway cites “Precious” (2009) as a strong influence, especially for how the main character copes with stress by daydreaming, yet acknowledges that its mother-daughter relationship is extreme. Garraway collected images from “Precious” and dozens of other films into a stirring video essay, “Black Girlhood in Cinema” (2020). Most of those stories depict “very traumatic things about sexuality, abuse or trauma — being a kid in an adult’s body.” And while she doesn’t necessarily like the politics, she says she loves the films that inspired her (which are listed at the end of the film), “because I see myself.” She would be putting the final touches on her latest, “Blaxploitation: A Visual Album,” if it weren’t for COVID-19. NYU closed its doors during her spring break, making the footage inaccessible. The pandemic has taken a toll on her emotionally, she says, and that impacts creativity. “I don’t want my work to reflect a time when I was most unhappy. I don’t want to necessarily relive it or bring attention to it in some way,” she says. For the time being, she’s updating her website, her reel and looking into how people are protecting archives.

In addition to its annual festival, RoxFilm hosts screenings and other events throughout the year, including a series partnership with Boston Latino International Film Fest and Boston Asian American Film Festival, with new films to be announced this fall.

Correction: An earlier version of this piece mistitled Daniel Callahan's upcoming film "The Color of Corona." It is not titled "The Color of COVID." We regret the error.