A rock on the ground is inert — just a solid hunk of mineral matter that forms part of the earth’s crust. But a rock changes significance when it’s held in a hand or hurled through the air. Suddenly, a lump of earth becomes a weapon, a symbol of action, a means of fighting back.

In Glenn Kaino’s “In the Light of a Shadow,” on view at MASS MoCA beginning April 4, we see thousands of fist-sized rocks suspended from the ceiling of the museum’s massive Building 5. Some of these stones are actual rocks while others are 3D printed facsimiles, cast from rocks the artist has collected at protests around the world, from Ferguson, Missouri to Cairo. Together, they form a football field-sized “galaxy” symbolizing the human impetus to take collective action when it becomes obvious that something, anything, desperately needs to change.

Hanging among the rocks is another representation of protest — a 15-foot-wide replica of the fishing boat Shadow V, which belonged to British royal Lord Louis Mountbatten who was killed in 1979 when the boat was bombed by the Irish Republican Army. The galaxy also includes rocks that have morphed into ships, thanks to miniature sails made of postcards, as well as rocks that are inhabited by tiny bubblegum wrapper sculptures of protestors throughout history. On these “planets,” Lilliputian figures twisted into form by animator and artist Lyndon J. Barrois face down tanks in Tiananmen Square, and challenge police officers in Los Angeles following the brutal beating of Rodney King. When lights are trained just so on these tiny bodies, they cast life-size shadows upon the walls. Visitors can glimpse their own shadows intermingled with those of civil rights protestors throughout history, including the uprisings in response to the fatal police shooting of Michael Brown in 2014.

“I hope people leave with a sense of connection and a sense of understanding,” says Kaino. The ultimate goal, he says, is to signal “that people are not alone.”

Kaino’s exhibit was inspired, in part, by two separate civil rights demonstrations that have left an indelible mark on history: Bloody Sunday of Selma, Alabama in 1965 and Bloody Sunday in Derry, North Ireland in 1972. In the first horrific episode, a phalanx of Alabama state troopers descended onto a peaceful group of civil rights demonstrators as they crossed the now infamous Edmund Pettus Bridge. The unarmed demonstrators were unmercifully beaten by officers wielding clubs, whips and even rubber tubing wrapped in barbed wire. The second violent episode unfolded when British soldiers fired on unarmed protestors demonstrating against the British policy of jailing suspected Irish nationalists without trial. Soldiers shot 26 civilians that day, killing 13 of them.

“Glenn is one of the few people I've ever met who has heard the stories of Bloody Sunday in Selma and Bloody Sunday in Northern Ireland straight from somebody who was there,” remarks Denise Markonish, who curated the show. “He heard it from John Lewis and then from Gerry Adams. And so, he had this thing sort of rattling around in his brain about the cyclical history of protest and revolution.”

Kaino himself clarifies that he is one of the few working artists to have talked directly with people involved in both traumatic events. And from those conversations, he says he had one epiphany: “the idea of connectivity through sacrifice.”

“The fight for our voice and for civil rights and voting rights is universal,” he says.

With “In the Light of a Shadow,” Kaino’s objective is to create “a compelling experience” elucidating the notions of bigness and smallness. We all feel small at various times in our lives. But small people, it turns out, can do very big things. The visitor, he suggests with the mingling of shadows, can play an important role.

“One of the best things about Glenn's inquiries is that they're open-ended and they don't propose to have a specific solution because he doesn't want to just tell us what to do,” says Markonish. “He wants to work with us on what can be done.”

Kaino is an L.A.-based conceptual artist who has always held firm that art should not just point a finger at problems but point to solutions. (“I don't ever want to create decorative protest art that just celebrates protest without actually contributing to scholarship or on the ground,” he says.)

In his polymathic career, Kaino has not only helped found LAXART, a non-profit visual art space in Hollywood, but worked in the upper echelons of Napster as well as served as a creative at Oprah Winfrey’s OWN cable channel. He sits on the boards of UCLA’s Hammer Museum and The Music Center. Not only does he paint, sculpt and create large-scale public work, but he is also a filmmaker. Last year, he released a documentary recounting the rise and fall of Olympian Tommie Smith, an African American sprinter who — decades before Colin Kaepernick’s bended knee — raised his fist on the 1968 Olympic podium, only to be virtually blacklisted from sports.

Kaino has approached his MASS MoCA installation as theater. Carefully calibrated lights cast shadows during different “performative sequences” over the course of about half an hour to a soundtrack produced by David Sitek, best known for his band TV On The Radio. Known for his “kit-bashing” approach to art, (a term referring to the idea of mixing and matching pieces from various commercial model kits), Kaino has continued that approach by deconstructing the idea of protest and social justice into a thousand different pieces and reformulating it to become ever more inclusive and expansive. 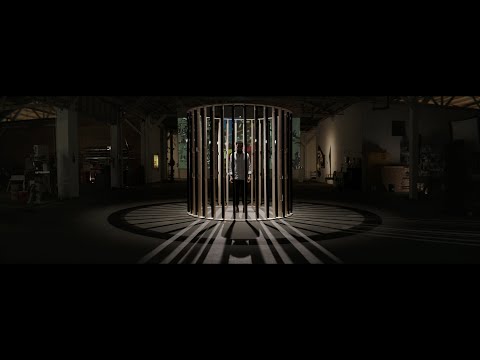 A second piece, “Revolutions,” features a circular sculpture of suspended metal rods that are reminiscent of prison bars or border walls. When the bars are struck in sequence, they play U2’s “Sunday Bloody Sunday.” Alongside the sculpture is a video utilizing the sculpture for a recording of the song. Directed by Kaino, the video features the singing of Deon Jones — an activist and singer who was pelted with rubber bullets by police in Los Angeles while protesting the murder of George Floyd. All proceeds from sales of Jones’ cover go to Fair Fight, the national voting rights organization founded by Stacey Abrams in 2018.

“I definitely consider my practice utopic and hopeful,” says Kaino. While “voices of colonialism and racism have grown,” so too, he says, has the impulse to challenge those voices.

“I do think that consciousness is a one-way street. We are winning over the long run. We are not done by any means, but I'm definitely optimistic that we have been making progress.”

Glenn Kaino’s “In the Light of a Shadow” opens at MASS MoCA April 4.