When you see a can of beer do you think of agriculture? Well, grain — an essential ingredient in beer — grows on farms that are usually far away from the Northeast. Now an alliance is working to build a regional grain supply chain that supports local farmland, one pint at a time.

To find out more we headed to Exhibit A in Framingham, Massachusetts where a hulking, industrial mill was cracking kernels of malted wheat in the brew house.

“As a young brewer, I didn't really think about the agricultural piece of this at all,” co-founder and head brewer Matthew Steinberg recalled. “I didn't know the farmer, but I knew the supplier — but there was this gap.”

Steinberg explained how most of the grain in this batch of IPA is grown and processed at large industrial facilities out West — but 26% is regionally sourced from much-smaller, independent producers. He's been working to boost his percentages as a member of the Northeast Grainshed Alliance. It's a grassroots organization with about 150 craft brewers, bakers, distillers, millers, maltsters and farmers from six states. Steinberg said they're shrinking the distance between grain fields and pints of beer with a more localized, more sustainable grain infrastructure.

“I want to sleep well at night, and I feel like it would be irresponsible to not try to be as ecological as possible in this line of work,” he said. “It's so water heavy, it's so energy heavy and it's so farming heavy."

Brewing is also shipping heavy, which has become more costly and less reliable. Steinberg recalled how a recent delivery of grain from the U.K. took three months to arrive in Framingham.

Steinberg said most consumers probably don't think about the barley in their beer (which provides flavor, color and alcohol) or where it comes from. That's why the Grainshed Alliance launched an awareness campaign. The SQ FT Project is a novel way visualize and calculate beer's impact — not on our palates, but on the planet. Take Steinberg's IPA.

“This beer supports about two to 2 1/2 square feet of farmland for every pint,” he said.

“Now the consumer may not be able to wrap their head around that, but they might be able to think, 'Wow, so that's what an acre looks like, that's a fair amount of farmland right there.' So they'll consider supporting a brand that's contributing to this effort.”

Exhibit A makes two of its own 100% regional grain beers that have certified SQ FT logos on their cans. Eventually, Steinberg said, all of his cans will feature the symbol.

“I want the consumer to see the SQ FT logo because I want them to have a connection to us and to the farmers and the maltsters who put in all this extra work to make local beer.”

Steinberg sources his grain from Valley Malt, which is about 90 miles from Framingham in Hadley, Massachusetts. Before it opened twelve years ago the closest malthouse was in Wisconsin.

On a tour of her facility, co-owner Andrea Stanley explained the role she plays in the localized supply chain, which is to prepare harvested grain so breweries can use it.

“Malting is this really critical process where grain undergoes a weeklong journey of being soaked and then sprouted and then dried down,” she said. “And it all starts with grain.”

While standing inside a 7-foot-tall stainless steel tank, Stanley scooped up a handful of germinating barley from Domoy Farm in New York. Then she demonstrated how small maltsters help bring the grain — which is a seed — to enzymatic life.

“Every morning the maltster is coming out and stirring the malt by taking a shovel and kind of working through it, digging down to the bottom,” she said. When the plump, golden kernels are ready, they're next transferred to a drying kiln before being packaged in paper bags that hold 50 pounds of grain.

As a maltster, Stanley acts as a conduit between craft breweries and growers in New Hampshire, Vermont, Maine, New York and Massachusetts. She said she's always trying to expand the grain market for brewers so she can contract more acres with her farmers.

“Most of them have certain amount of acres that make growing grains profitable for them,” Stanley said. “Growing five acres is probably not very profitable for most farms — growing 50 to 500 acres is.”

According to the Northeast Grainshed Alliance's nifty SQ FT calculator, one acre of farmland yields about 8,000 pints of beer that Stanley said can also help repair soil.

“When grain is farmed on land in the northeast it is giving that land a bit of a rest from other crops, maybe vegetables or corn or soy,” she said. “It's helping to fix nitrogen in the soil, there's just a lot of really healthy things about having grains in rotation on farms.”

According to Stanley, Valley Malt supported 600 acres in 2021. This year she expects the number to be closer to 1,000 with help from her flour milling operation Ground Up.

“I think focusing on actual acreage and actual square feet and numbers is important, because we need to know if we're making progress, " she said.

In a field behind the malthouse, beside a compost pile and an array of solar panels, Stanley said her sustainability-driven company has grown steadily since opening in 2010. Now she and her husband Chris are scaling up production and relocating to an industrial building in nearby Holyoke that's powered by 100% renewable hydroelectric. Stanley is also excited to start delivering malt and flour in the company's new electric van. She hopes the SQ FT logo helps communicate the Northeast Grainshed Alliance's commitment to localized industry and environmental action.

“Things are burning. Things are flooding,” she said, “if we can't get this going now we're losing out on precious time to reverse some of the effects of climate change. That drives a lot of what we do.”

Listing the negative impacts that non-local agriculture wreaks on the planet would be really scary on a beer can, according to alliance member Barry Labendz. But he said, “If you give somebody information, a kind of cool, fun fact, they're going to want to know a little bit more. And that's the whole idea. We need to do this and support it, otherwise it will disappear.” 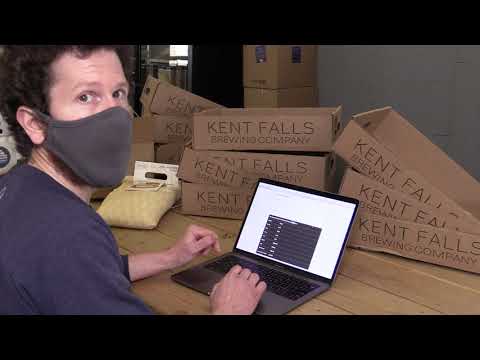 Labendz co-owns Kent Falls Brewing where he came up with the SQ FT concept. He opened his company in 2015 as Connecticut's first farm brewery. Labendz said all of his beers have always been made with 100% regional malt. For him, the Grainshed Alliance is reclaiming a sense of community and a crop that once grew throughout the Northeast before grain production moved out west.

“A lot of towns back in the day would have a miller, maybe a maltster,” he said, “and a farm growing grain somewhere nearby that supplied those businesses.”

Looking ahead to the SQ FT Project's future, Labendz envisions consumers walking into, say, a package store, “And they have sections for beers with locally grown grains. And then somebody can shop and see this symbol on many, many beers.”

But if it takes millions of cans of beer to support Northeast farms, Labendz said the Northeast Grainshed Alliance needs craft beer lovers to get cracking.

Correction: A previous version of this story misidentified barley in a photograph.  We regret the error.

Cooked: The search for sustainable eats