Magic/Bird begins just like a game at the Garden. The lights go down. The music comed up. And spotlights swirl on a parquet floor.

But we're 223 miles south west of Boston, at Broadway's Longacre Theatre in New York. And those aren't athletes up there. They're actors, like Peter Scolari, caught just outside the cast door a few hours later.

"The music is so stirring, I guess," Scolari said. "Being an aging, former, just slightly above average high school athlete, there is a realization of a childhood fantasy."

That's right, Peter Scolari, he of Bosom Buddies and Newhart fame, once dreamed of becoming an athlete. Instead, he was helping to bring the story of basketball's greatest rivalry to the Longacre. 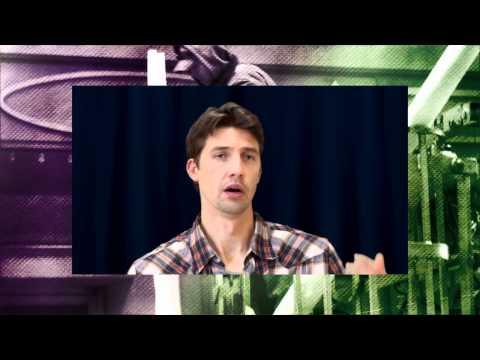 "It's a story about people getting beyond themselves," Scolari said. "It plays out in the story, the context of the story. It plays out amongst the actors on stage because four of us play 15 roles."

Scolari played four roles, including Laker's owner Jerry Buss and legendary Celtics general manager Red Auerbach. The costume changes were made with a mustache here, a bright green Celtics jacket there, all taking place on stage and in full sight of the audience. Here, helped to life by a dangling cigar, Scolari's Auerbach and an NBA executive discussed a new television deal featuring the Celtics and the Lakers.

NBA Executive: Maybe this will get us out of television prison.
Red: What's that supposed to mean?
NBA Executive: We've gotta get back on primetime.
Red: Oh, you're talking about the…
NBA Executive: The tape delayed broadcasts.
Red: Who the heck watches those? Who watches television at one in the morning.
NBA Executive: I don’t think hockey does worse.
Red: Don't get me started on hockey!

The same production team staged Lombardi at the nearby Circle on the Square theater last year. Critical response was "tepid," according to the New York Times, but the show ran for eight months. The reviews for Magic/Bird were much better, but producer Tony Ponturo explained that the challenge was the same — satisfying long-time Broadway theatergoers.

"And then you're gonna have sports fans who are gonna walk into the theater for the first time who are going to say, 'Oh, this is what a Broadway theater looks like,'" Ponturo said.

Larry Bird was one of those theater newbies. He reportedly told Tug Coker, the actor who plays him, that opening night would be the first time he's ever seen a play on Broadway... or anywhere.

The actors took aim at hoops which fly in from off stage while projected newspaper box scores swirled around them. The staging was novel, but the idea that the two players kept an eye on each other's stats was nothing new. Bird described doing just that for a 2010 HBO documentary, Magic and Bird: A Courtship of Rivals. In fact, one theatergoer described the play as "identical" to that movie. It was a bit of an overstatement, but Ponturo said even though the plot is familiar, the setting — an intimate space where cell phones and other distractions are forbidden — added something new.

"It is the one time that we're told to put our swords down, be quiet, listen, and just take in the storytelling in the theater," Ponturo said.

Vince Lombardi died 40 years before his story hit Broadway, but while the actors worked out a few kinks on stage, Ponturo admitted he was a little worried about how the opening night's VIPs would react.

"There's a scene in the 1984 finals where Magic did not shoot in a Game 2 with time expiring and we basically say that Magic choked," Ponturo said.

In fact, the headline "Magic Chokes" appears in bold print on the projection screen behind the actors.

"Yeah we say it quite dramatically actually," Ponturo admitted. "You do cringe at times that they're not going to run after you after the performance and say, 'What are you thinking?'"

ESPN's Jackie MacMullan, who chronicled the rivalry in her book, When the Game Was Ours, and served as a consultant on the play, wasn't concerned.

"Magic Johnson's been on stage his whole life," MacMullan said. "To him this is nothing different. I think he loves this idea. I'm sure he'll try to push it forward to something else beyond that. He's the one who always wants to do these things and has to talk Larry into them."

Larry Bird played his entire career in Boston. Magic Johnson did the same in L.A. But, New Yorkers filled the theater during previews, and many said they'd recommend that their sons, neighbors, and co-workers come back after opening day. MacMullan says that's the power of this particular rivalry.

"You know there are few tandems that have the kind of reaction that Larry and Magic do," MacMullan said. "I'd say that Frasier and Ali were one. Martina and Chrissy were probably another, but there's only a handful."

Magic and Bird brought new fans to the NBA at a time when the league was floundering. Broadway could use a boost today, and MacMullan says sports can provide it.

The show's producers envision a series of sports-related offerings on Broadway, but they're not ready to talk about what's next just yet. First, they have to get through Opening Night of Magic/Bird on April 11, with Magic Johnson, Larry Bird, and Jackie MacMullan in the audience.