A young girl from a Ugandan slum became a chess champion, and then she became the subject of a book. In The Queen of Katwe, Tim Crothers tells the story of Phiona Mutesi, who aspires to one day be a Grandmaster. Bill talks with Crothers about his book.

Bills thoughts on The Queen of Katwe.

Phiona Mutesi was born in a Ugandan slum called Katwe. Her home is "a 10 x 10 foot windowless room, its walls made of crumbling brick, with a corrugated tin roof held up by some spindly wood beams and spider webs." She shares that room with her mother and two brothers.

When she was nine, Phiona started hanging around a hut where some of the boys in Katwe were learning to play chess. She'd heard that Robert Katende, the man teaching chess, gave the children a meal each day. Phiona was hungry.

The Queen of Katwe is an extraordinary account of one young woman's exceptional achievement. It is also a lament for this world in which only a tiny number of incredibly fortunate and exceptionally determined children have any chance of escaping the dehumanizing poverty that prevails in Katwe and places like it.

Phiona Mutesi aspires to be a Grandmaster. If she's able to take a few more steps toward that goal, she will perhaps be able to earn enough money playing chess to help the members of her family to a life wherein they'll have enough to eat and a safe place to sleep. Her rare talent and good fortune highlight the grim sadness of the circumstances of the millions of Phionas who lack her singular talent, her tenacity, and the mentoring of someone like Robert Katende. 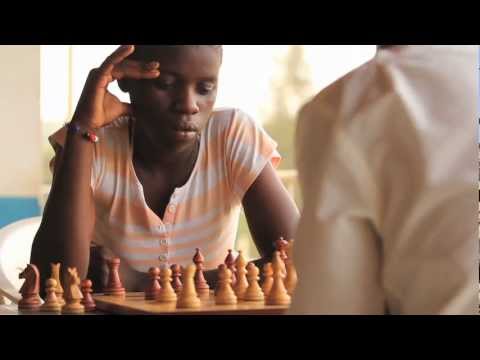