On April 2, 1931, Babe Ruth and Lou Gehrig stuck out in consecutive at-bats. That was unusual for the New York Yankees legends, but not unheard of. But the moment was especially notable because the pitcher wasn’t a Future Hall of Famer or even a Major Leaguer. It was a 17-year-old woman named Jackie Mitchell.

American history columnist Tony Horwitz had never heard about Jackie Mitchell's accomplishment until his son mentioned reading about her in a book for children. Incredulous, Horwitz began to research Mitchell's showdown with the Sultan of Swat and the Iron Horse. He wrote about what he learned in an article for Smithsonian Magazine.

"Mitchell grew up in Tennessee. And as a girl, one of her neighbors was a minor league pitcher in Memphis, “Dazzy” Vance, who would go on to lead the National League in strikeouts seven times. And the story goes that taught he her how to pitch," Horwitz told Bill Littlefield on Only A Game. "And she later moved to Chattanooga, where, as a teenager, she became a talented, multi-sport athlete, who came to the attention of the Chattanooga Lookouts, the AA minor league team in the town."

Mitchell was a lefty who threw a sinking curveball. In those days, the pitch was known as "the drop." But it took more than that to get a chance to face the mighty Yankees. According to Horwitz, Lookouts President Joe Engel had a penchant for showmanship and would do anything to fill the seats.

“He booked the Yankees for two exhibition games on their way back from spring training in Florida, and he signed Jackie Mitchell to pitch against them,” Horwitz said.

Mitchell struck out Ruth. Then she got Gehrig to swing at - and miss - three straight pitches. After seven pitches total, one of the most feared hitting tandems in baseball history was retired. The next batter was Tony Lazzeri. Mitchell walked him and was pulled out of the game.

Whether or not the event was fixed is still up for debate.

“The game in which she pitched was originally scheduled for April 1, which has led many people to suspect that this was an April Fool’s Day prank. A news reel survives at least of Ruth at the plate, not of Gehrig, and he swings wildly and is rather theatrical as he whiffs,” Horwitz said. 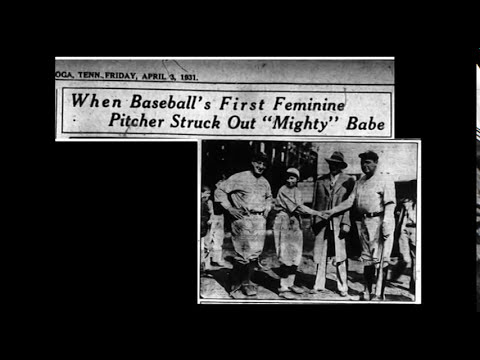 But not everyone thinks the fix was in.

“There are others, who disagree who say that timing and familiarity are crucial to hitting, and that a lefty sidearmer that they never faced, two left-handed batters, that it’s possible she really fooled them.”

One of the believers was Mitchell herself.

“If Ruth and Gehrig were in cahoots either with each other privately or with the Lookouts’ owner Joe Engel to strike out on purpose, she wasn’t in on the gag,” Horwitz said.  “She believed until the end of her days that she had really struck them out.  And was a proud woman who had real talent, went on to pitch in other leagues, and felt she had legitimately whiffed them.”

Regardless, Engel’s plan accomplished what he no doubt hoped it would.

“It was a success," Horwitz said. "Filled the house, made headlines in the New York Times: 'Girl Pitcher Strikes Out Ruth and Gehrig.'  It's a great story and it lives on."

During his research, Horwitz began to realize the line between fact and fiction was often blurred.

“One thing that struck me writing this piece, as someone who has written a lot about history but not baseball history, is how much lore and perhaps outright fiction there is in what we regard as the history of baseball,” he said. “I found it hard to get real facts that I could trust. It’s almost as if we love the stories so much that we don’t want the facts to get in the way of them.  And I think, perhaps, this is an example of that.”