Every once in a while, the Only A Game team is asked a question we can't answer. Wednesday evening was one of those times.

Why do some sports carry the moniker women's and some go by ladies'?

First, let's get some definitions out of the way. Is there really a difference between a woman and a lady? Here's what Merriam-Webster's dictionary has to say:

la·dy noun, often attributive ˈlā-dē
: a woman who behaves in a polite way
: a woman of high social position
: a man's girlfriend

The definition of "woman" is much more straightforward:

Most of the year, these distinctions fly by unnoticed. How many people tune into women's basketball, only to wonder why another channel is airing ladies golf? (How often are those two sports even on TV at the same time?)

But, during the Olympics, the two terms come into sharp contrast. Tune in for ladies' alpine skiing followed by women's curling. Ladies soar in ski jumping, but women ride the luge. Is ski jumping somehow more polite than luge? Do curlers occupy a lower social position than alpine skiers? And how do the announcers in Sochi manage to keep it all straight?

Leaving off nordic combined — which is only contested by men — and ice dance — which only includes pairs — there are 14 different categories of winter Olympic sports. So, it's easy to place them all in a handy dandy chart.

It's a pretty even distribution between women's sports and ladies'/ladies sports. (Please, don't ask me why some ladies' use the possessive and others do not!)

At first, I wondered if older Olympic sports might be reserved for "ladies," while more recent sports got the more neutral "women's" nod.

Just to be sure, and to flex my failing Excel muscles, I continued with the chart.

Ski jumping, which for decades was considered too unladylike to be included in the Olympic games, is competed by ladies. Women's luge was introduced back in 1964, making it older than all but four other sports.

There goes that theory...

But, expand the chart out by one more variable, and we start to get somewhere...

And there it is. The International Ski Federation (FIS) and International Skating Union (ISU) govern some of the oldest women's Olympic sports. They also govern some of the newest. When women were finally allowed to compete in ski jumping this year, I can understand why the FIS didn't want to go back and change the name of ladies' alpine skiing, which debuted as an Olympic sport 90 years ago.

I can understand it, but I don't agree with it.

The opposite of ladies' isn't men's. It's gentlemen's. Calls for the Gentlemen's Singles competition sound perfect at Wimbledon, but can you imagine watching the competitors line up for the gentlemen's snowboard cross? Or gentlemen's short track speed skating?

Would standardizing the way we refer to female athletes solve all the world's ills? Of course not. But it would be nice if little girls didn't think they needed to be ladylike every time they laced up their skates.

And it sure would make things easier for reporters trying to get things right. 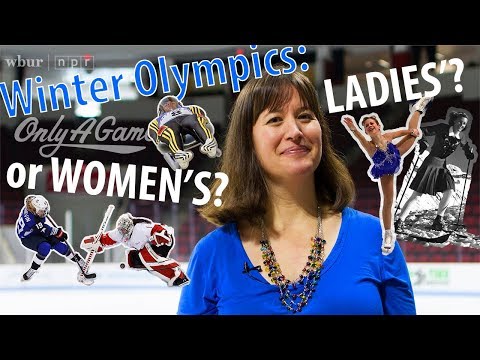