Shannon Galpin writes for National Geographic and elsewhere about, among other things, riding bikes in places where women have never ridden them. Those places are in Afghanistan, and Galpin’s new book, "Mountain To Mountain: A Journey of Adventure and Activism for the Women of Afghanistan," provides insight into the circumstances of the women who live there and at least one, the author, who has been determined to change those circumstances.

BL: Quite early in "Mountain To Mountain," you write, “I didn’t go to Afghanistan planning to ride a mountain bike.” What was your plan when you first went to Afghanistan, and how did mountain biking eventually come into it? 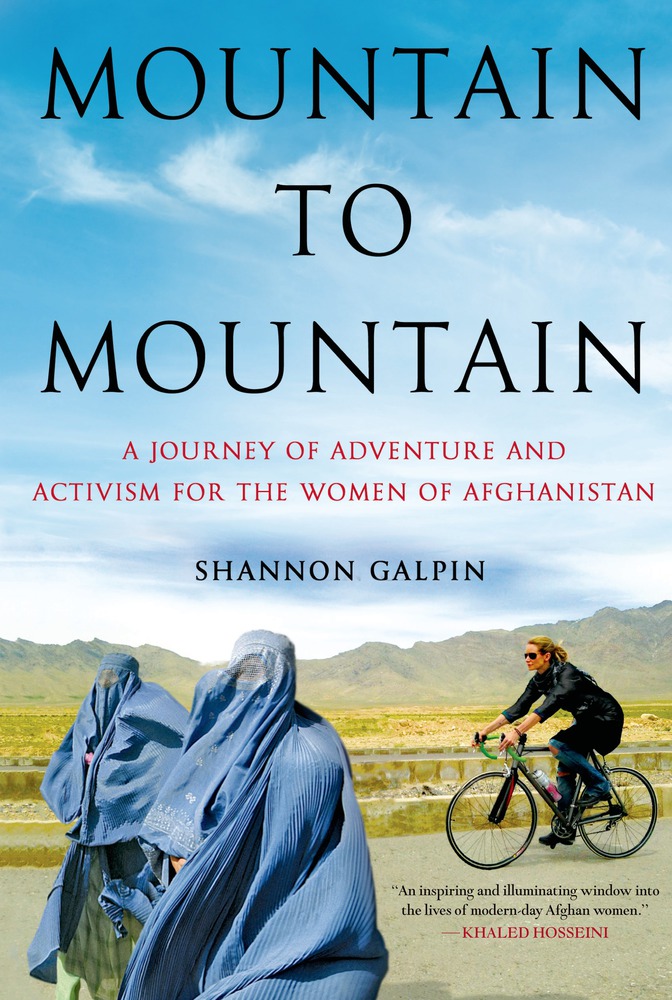 SG: Well, I first went to Afghanistan to work on behalf of women. My focus was women's rights and gender violence. I chose Afghanistan simply because it was repeatedly ranked the worst place in the world to be a woman. The mountain biking didn't come into play until about a year and a half later, after several visits to Afghanistan, where I realized that: one, it was a country where women and girls were not allowed to ride bikes, one of the few countries in the world where that is the case .

And two, I am an avid mountain-biker. I live in Colorado and I was incredibly curious to explore the goat paths and mountain passes on two wheels. And I wondered if, as a foreign woman, which is often considered an "honorary man" — it's kind of a neutral gender — if perhaps I could challenge that gender barrier and ask more questions about, "Why can't women ride bikes? What is the controversy? Why is it a taboo?"

BL: You mentioned that you found that as a foreign woman, you were considered what you term “a hybrid gender.” What exactly were the implications of that?

SG: It's a really fascinating situation to be in. Pretty much, if you look foreign as a women, you are considered an equal to the men. Almost all men will eat with you, drink with you. You make plans with them. And, as they are often the gate-keepers in these rural communities to what you can or cannot do for the local women or girls, it's incredibly advantageous to be able to be considered an equal, and yet, to also — because I am a woman — have full access to the women and girls, where often foreign men would not have that access. And what I hear from the men and then what I hear from the women are often very different conversations.

BL: In one of the villages where you rode, an Afghan man said to you, “It takes a lot of intelligence to ride a bike. I’ve never seen a woman do it.” Tell us why you wrote that this was “perhaps the most significant statement any Afghan man had made to me about women riding bikes.”

SG: I'm riding his crazy bike that has literally a little windmill on it and speakers and a dried flower in a vase mounted to the handlebar and brakes that don't work. He's basically sliding Flintstones-style with his feet along the floor. And he hands it to me, almost as a little friendly challenge. He laughs and smiles and I ride off and circle around and come back. He's fascinated, and when he says that statement, I said, "Well, would your family members every try riding a bike?" And he just shook his head, "Oh, no, we would never allow that. That's not our culture."

And I looked at him, and just that statement about the intelligence it takes to ride a bike, as though that's the reason, was fascinating. And it's just one more, I guess, insight as to this taboo.

Bill's Thoughts On 'Mountain To Mountain'

Galpin would be the first person to acknowledge that the changes she has provoked have been modest, but one of the achievements of Mountain To Mountain is that her story makes a convincing case that interactions like the ones she has had in Afghanistan matter. Individual encounters can alter the lives of the individuals, and the members of their families, and the members of their communities. Just by being an open, adventurous, compassionate woman in Afghanistan, Shannon Galpin has encouraged people there to understand that not everybody from the U.S. wears a uniform and carries a weapon.

Galpin's ongoing attempt to create opportunities for girls and women in Afghanistan to become more educated, more physically active, and freer in every sense is inspirational, as is her energy.