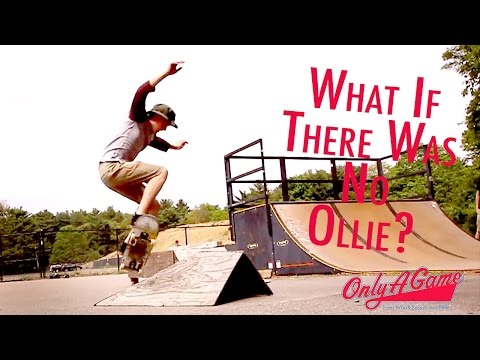 For a time, the "ollie" was the holy grail of skateboarding moves. Before it was invented, it was the one thing all skateboarders wanted to do, but couldn’t. And when it was finally mastered, it changed everything. But was the ollie really invented by a guy named Ollie?

When I was growing up in the '80s, I thought my older brother was really cool. And he owned a skateboard.

John only really knew one trick. He'd be tooling around, nothing special, and then he'd crouch down, shift his feet on the board and … pop! Liftoff.

John and his skateboard would catch air, just a few inches, but I never understood how his skateboard stayed attached to the bottom of his feet while he sailed over the asphalt. It looked to me like my brother, a mere mortal, a band geek, had just broken the laws of physics. It was magic.

"It is, yeah, it's very magic. And there's a whole science and physics to it that I can't really explain," says Craig Snyder. He has written an entire book, a 912-page book, on that one trick. It's titled "A Secret History of the Ollie, Volume 1: the 1970s."

Before the ollie, the one thing all skateboarders were searching for, yearning for, was air.

"The 1970s were about breaking free from gravity," Snyder says. "And I think that really began in the 1960s with Evel Knievel. He was a huge influence. Can I do that? Can I get air?"

But skateboarders just couldn’t do it. They could ride up and down the walls of abandoned pools all they wanted, but most were stopped in their tracks by a six-inch curb.

Today, skateboarders just do an ollie. If you see a street skater hop from the ground to a rail or a ledge … that's an ollie. Lots of the high-flying tricks in the X-Games start with an ollie as well. There's even a Finnish pop song dedicated to the Frontside Ollie. It spent a couple weeks at No. 1 back in 2012.

People ... weren't sure what they were seeing. Is this some sort of trick photography?

"Alan did an ollie like no other person. No one to this day has done ollies like him, and if you saw him back then it was so effortless and no one could copy that. He was definitely an original. An originator."

But was Ollie really the originator of the move we now call the ollie? As Snyder dug deeper for his book, he realized the story he’d always known — the story he thought he’d witnessed — was wrong.

So, he sat down for a re-write. And while he was at it, he checked in with his old friend, Alan Gelfand.

"When I emailed Alan and just gave him a brief synopsis of how the book had taken shape, his reply to me was, 'I know you know.'"

This is what we know for sure. During the summer of 1977, 14-year-old Alan Gelfand was working on the lipslide — a trick his friends had already mastered. But something totally unexpected happened. All four wheels came off the wall. His friends called it the "ollie pop."

Fast forward a year and a half, and Alan debuted an even more impressive move, the "ollie air," in front of photographers in Southern California. This was the real game changer. The physics of this trick opened up skateboarding to all sorts of new innovations.

Not long after, Alan and his new move were featured in Skateboarder Magazine.

"People opened up that issue and they were just blown away. They weren't sure what they were seeing. Is this some sort of trick photography? Did he land it? Did he fall off? It just didn't seem believable."

No one's denying that Alan Gelfand invented the ollie pop. But thanks to Craig Snyder's new book, we now know that Alan didn't invent the ollie air. It was shown to him by someone else.

Jeff Duerr was part of Alan's group of friends at Skateboard USA. The 17-year-old had developed a trick of his own. His friends called it the due air. Today, we call it the ollie.

Here's what Snyder says really happened. One day, after Skateboard USA had permanently closed, Jeff hopped the fence and noticed Alan doing the same thing. Jeff showed Alan his new trick, and soon Alan was better at it than Jeff had ever been.

'I Know You Know'

Alan Gelfand loved attention. He loved the media. But every time Alan went running toward the cameras, Jeff headed the other way.

"He didn't like the media. He had a distrust of the media. So when the cameras would come out, he would stop skating. He skated for the love of it. It was an artform."

Jeff kept performing the trick that was making his friend famous — for a while. Until one day he was down in Miami and a group of skaters asked if Alan had shown him how to do the ollie.

"Jeff was incensed and was like, "No ... I ... No, I showed it to Alan." That really hurt him. He's always been a little bit reclusive and that just made him recede a little more into the background."

Jeff didn’t fight back. He didn’t demand that Alan set the record straight. He simply stopped performing his trick in public. And for 35 years, even many of his friends didn't know the truth.

"I think I was the only person he'd tell the story to," Snyder says. "And he only told me the story, we never did a phone interview, it was always email because he wanted everything written so that I would not misquote him, I would not take things out of context. He was very careful, even with me."

Snyder isn't taking Jeff Duerr's word on all this. He hunted down other skaters who were there. As for his old friend Alan Gelfand? Well, he didn’t exactly deny it. He replied, saying, "I know you know." Snyder says, "He was aware that I was aware of  Jeff Duerr and the 'Due Air.'"

Snyder still sees his book as a celebration of his friend, Alan. But he wants to make sure Jeff gets credit, too. Neither Gelfand or Duerr agreed to talk to me for this story.

Alan stopped competing professionally at 16. He already had two bad knees. He raced cars for a while and opened a private skate park called 'Olliewood.'

Jeff followed a different dream. Today, he's devoted to wildlife conservation. But, before that, the man who created the move that made me, as a kid, believe that the laws of physics had been broken, completed the coursework for a Ph.D. in Physics.