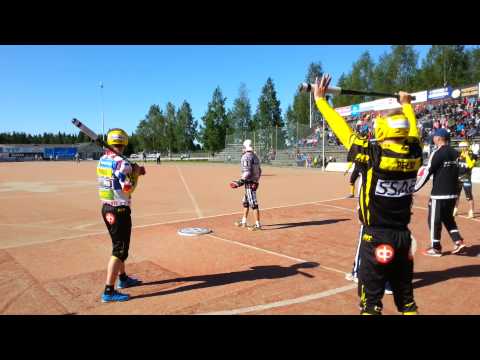 “If you dropped acid and decided to go make baseball, this is what you would end up with” — that’s how a Minnesota Twins scout described the popular Finnish sport of pesäpallo.

The Wall Street Journal’s Brian Costa was recently in Finland to report on the baseball-like game that features more action — and a lot more running — than our national pastime. Costa joined Only A Game's Bill Littlefield.

BL: Brian, how does pesäpallo differ from baseball?

There are very, very few strikeouts, very few swings and misses. So pretty much every ball that gets pitched gets put into play.

BC: The biggest difference is the pitcher, instead of throwing the ball from a mound at the batter, stands beside him and throws it up in the air and sort of gets out of the way. But there are base paths, there's four bases, there's home plate, players field with gloves. So it's a little bit of "just like baseball" and "nothing like baseball."

BL: Critics of baseball in the U.S. say the games are too long. It's too slow. There’s not enough action. Would such critics be happier with pesäpallo?

BC: Oh, they would love pesäpallo. There are very, very few strikeouts, very few swings and misses, so pretty much every ball that gets pitched gets put into play.

BL: Ah, so there is continuous action I guess.

BC: It is. And what is does is it keeps the fielders on their toes because not only are they constantly chasing after balls put in play, but they're sort of swarming around in these different defensive formations. They did a study where they put a pedometer on a player a few years ago, and they found that the player ran 10.5 kilometers during the game, which is more than Cristiano Ronaldo, the soccer star, averaged during Champions League matches this year.

BL: What’s it like for fans attending a game of pesäpallo? And how many are there? Is this a big popular attraction?

BC: This is really not a city sport, so [in] Helsinki, you won't see that much of it. But it is the sport of the Finnish countryside. You'll have towns where the local population may be 3,000 people, and they'll get 3,500 at a game. Someone there told me, "You know, we don't go to church as much anymore here, so this is like that community coming together thing for us."

BL: How was the sport invented — because I’m assuming acid was not involved, nevermind what that Minnesota Twins scout said?

BC: No, I don't think acid was involved. There was a Finnish Olympian, track and field star, back in the early 1900s and he was visiting the U.S. and he went to a baseball game in Boston. And his reaction was almost about 100 years ahead of his time, which was to say this is a really fascinating game, but it moves a little bit slow. So he went back to Finland and later created his own version, basically taking what American baseball already had and making whatever rules he saw fit.

BL: You note that a scout from the New York Yankees was in Finland last month for All-Star weekend there. I assume he was looking for talent. Is it just a matter of time before Major League Baseball is flooded with Fins?

BC: That may be quite a bit of time before they're flooded with Fins. Scouting in Europe, it's not exactly a rich, treasure trove of future major leaguers. But I think when you're a scout there, you're just looking for great athletes that might have a chance of being developed into great baseball players.

BL: Finnish players, I gather, do not seem very interested in playing baseball as we know it?

BC: No they're not. It's very interesting. There were a fair number of fans in the stands who had Yankees or Red Sox or Cubs or other MLB hats on, but none of them seemed to really follow Major League Baseball. The people who I asked about their impressions of it kind of smirked or winced or just said, "eh." I mean they feel like they've got a better version of it.