“Maybe I’d be in the NFL if this was available,” says former Stanford kicker Derek Belch, referring to the new technology that’s bringing virtual reality to the NFL and some top college football programs.

Belch, who graduated from Stanford in 2008, is the founder of STRIVR Labs. As NFL training camps open, the Silicon Valley startup will be working with the Dallas Cowboys, New England Patriots and San Francisco 49ers to help quarterbacks and other players prepare for gameday.

SS: What it’s like when players put on the virtual reality headset?

DB: You literally have the eyes of the quarterback as if you were on the field. It looks, it sounds, it feels real. I mean, about the only thing you’re not doing is getting hit — or maybe not smelling the grass and maybe one day we’ll get there. 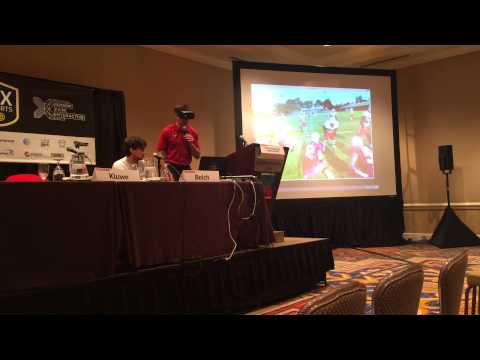 SS: To be clear, this technology is about watching film in a virtual environment. You’re not actually throwing footballs to virtual players or anything like that. So how does it help individual and team performance on the field?

DB: This is not all about throwing for 500 yards in a game or throwing five touchdowns and zero interceptions. It’s about getting everybody on the same page. And particularly at the NFL level, there’s a lot on a quarterback’s plate. And especially for young players, it’s feast or famine, and they throw you in the big kid pool right away. We’re just accelerating the learning process for these guys so they don’t have to think as much on the field. There’s a lot of guys that can throw the ball, but the thinking thing is what separates the average from the good and the good from the great.

SS: I’ve actually had the opportunity to put the headset on and immerse myself in a Stanford football practice. I learned one thing: I would make a very, very poor quarterback at Stanford. I’ll put that out there. Please don’t recruit me. What evidence do you have that time spent virtually immersed in practice helps players perform better during games?

"[B]y next year you’re going to see every NFL team with what we do or something similar."

DB: There’s been a lot of press out there that has basically attributed Kevin’s great play down the stretch to our training device. I will never go that far. There were other things going on there and, Kevin, he’s a good football player. It may not have been because of virtual reality. But the numbers are there. The data’s there. We saw that he used it. We heard qualitatively. You know, anything that can make a player feel more prepared is going to have a positive outcome on performance, and I think at the very least that’s what we’re going to do.

SS: Obviously there’s going to be a risk of injury during actual games but is there a chance this technology could help reduce injuries during practice — instead of getting hit by a teammate or running and throwing too much on a hot summer day you can get more reps in virtually, right?

Five years from now, we really could be looking at a situation where you might be able to just watch a game from the couch as if you’re right there on the sideline.

What we can do is — let’s take an example. Let’s say a player’s already injured and he can’t be on the practice field going full-go, but he can get his reps in a virtual environment and not further injure himself while he’s rehabbing, so when he is ready to go, his mind is there, and it’s just his body that has to catch up.

SS: What do think is the future of virtual reality in sports — for both fans and competitors?

DB: You know, five years from now, we really could be looking at a situation where you might be able to just watch a game from the couch as if you’re right there on the sideline. On the player-coach training side, we’re only scratching the surface. I think by next year you’re going to see every NFL team with what we do or something similar.

We’re working on some stuff that can basically trick your brain into thinking you’re doing something that you’re not; that makes it seem even more real. We’re working on some stuff that is going to actually be able to have you move around at a decent pace. I think three, four years from now it’s going to be totally different, but I don’t think we’re ever going to be able to totally replace practice.