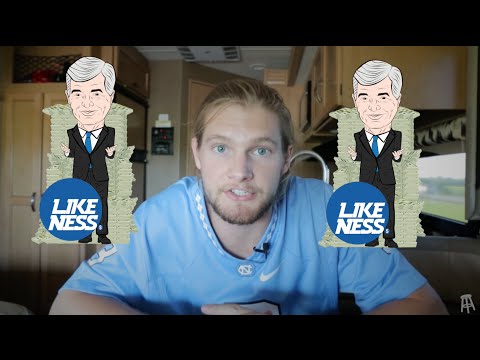 The NCAA is a nearly $1-billion a year business, but athletes are prohibited from profiting off their own likenesses. Caleb Pressley has noticed. He's the 22 year old former backup quarterback for the University of North Carolina, and he's now got his own line of 16 football-related t-shirts. One features NCAA president Mark Emmert standing in front of two tall piles of money — which is what Pressley hopes to earn, $12.50 at a time, selling that shirt. Caleb joined Bill to discuss the the inspiration behind his "Likeness" line of t-shirts.

BL: Why did you decide to make a t-shirt of NCAA president Mark Emmert?

CP: Well, I just graduated college in May. And while I was in college, my entire four years, I was affiliated or I was even a member of the NCAA institution. And Mark Emmert, you know, he's the president of that governing body. He was always a role model to me. When I graduated — you go through a stage in your life where you're like, "What's next? What am I gonna do?" These are times you have to look up to your mentors, to your role models.

I looked up to mine. I said, 'What would Mark Emmert do right now?' I said, 'You know what, what he would probably do is find some people or find one person and then take their image and their ability and skill and just make as much money as possible off them, and then not give it to them.' You know what I'm saying? I'm just out here trying to follow in his footsteps. Now, have I started a non-profit, tax-exempt organization, and am I making a million dollars or more in annual salary yet? No, I'm not. But I'm still following in his footsteps. Hopefully, I'll be there one day.

BL: Now, 15 of the shirts in your line feature the likenesses of current players. It looks like I can choose between Mississippi State quarterback Dak Prescott and Vanderbilt running back Ralph Webb. Have I got that about right?

CP: No, you're completely incorrect. Those are just kinda like artistic abstractions of college athletes. To put a name on it like that, I wouldn't go that far. I don't know. The art is hard to describe. You either get it or you don't. But the thing with those shirts, though, is they also make $12.50 in profit, every single one of them. They're $25 on Barstool. I'm saving all of that money as well — except to the savings account. Mark Emmert to the checking account. I will save all of that money, and then in one year, two years, three, even maybe four — whenever the time is appropriate — I'ma go back and I'ma donate that money. I'm trying to be a more charitable person.

So whenever the appropriate time comes, I think I'm going to donate that money to 15 different people. Now, I don't know who those 15 people are going to be. But I think over the next one to four years, hopefully, I'll be able to find someone I feel is deserving.

BL: Now the time frame that you mentioned — this variable time frame — it doesn't have anything to do with when the athletes who might, sort of, resemble the people on the t-shirts graduate or become ineligible to play football anymore, does it?

CP: Woah, I think you're really — I gave you an inch; you took a mile there. That sounds outlandish, that sounds almost illegal and it sounds about right.

BL: You were a student-athlete at the University of North Carolina. At what point during your career there did you realize how much the NCAA and its member schools were profiting off the likenesses of the athletes playing basketball and football, and what did you come to think of that arrangement?

CP: Honestly, the very first day I got on campus I walked into the student store and they're selling No. 2 Carolina blue jerseys for $90. Now, one of my best friends was our quarterback Bryn Renner. He was also No. 2. They sold a No. 2 jersey for three years straight in the student store. And guess what happened when he graduated? They went to No. 3 — coincidentally, our best player at the time, Ryan Switzer.

So they're selling these things for 90 bucks a pop. My friends aren't seeing any of it. That's when I started kind of putting two and two together, realizing that maybe they're making quite a few bucks off these people, and maybe these people aren't being able to go out to Chipotle with me as often as they should, because they're not getting any of the money from these jerseys.

BL: You ran the plan for the entire line of likenesses — sort of — t-shirts by an attorney, as I understand it. Is he preparing your legal defense as we speak, just in case?

If Mark Emmert sues me for his likeness, it will by far be the highlight of my entire life.

BL: So no cease and desist orders so far? No lawsuits? Nobody's skulking around trying to serve you so far?

CP: I guess my main point there was: what do you think would happen if Mark Emmert sued me?

BL: I think there would be laughter across the landscape, myself.

CP: I think his little NCAA might crumble from capital to lowercase letters. I don't know. It just doesn't make sense. I'm just trying to say I'm really not that worried about it. If he sues me, honestly, I will be so happy. I've went through life, I had a great childhood. I went to high school. I was able to have a great high school career. I got to go to college and play football, and now I have a cool job — I tour the SEC. Everything's went great so far. However, if Mark Emmert sues me for his likeness, it will by far be the highlight of my entire life. I look forward to the day this happens. Obviously it will never happen because that would be hypocritical, and we all know Mark Emmert, president of the NCAA, is not a hypocrite.