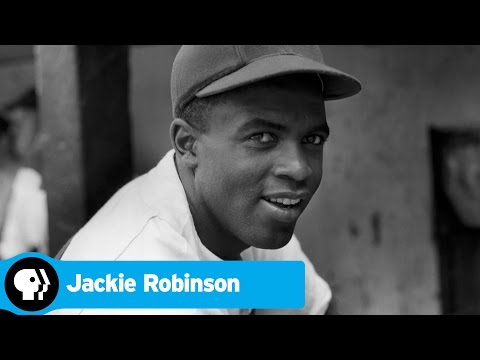 BL: Jackie Robinson’s breaking of Major League Baseball’s color line in 1947 has, of course, been widely celebrated, and the challenges he faced are well known. Maybe nobody saw them as clearly as his teammates on the Brooklyn Dodgers. Among them was pitcher Don Newcombe ---

Newcombe and Roy Campanella were among the black players who joined the Dodgers in the years after 1947. But it sounds as if Newcombe didn’t feel that made Robinson’s situation a lot easier to bear.

There is no other sport in which the number of one man is retired in all 30 stadiums.

KB: No, I think there was something particular in the makeup of Jackie Robinson that made him perfect for this experiment, and I think that we can shed the sense of Branch Rickey reaching from Heaven like Michelangelo's painting and touching the finger of his son. As John Thorn the historian says, he went looking not just for baseball ability, but he went looking for character. And he found it in Jackie Robinson, and he was the person who is going to be able to shoulder this burden. From the second the proposition to Jackie went forward, he didn't spend another day of his life without actively working to better the lives of other people, his people. It's a human story at the highest possible level.

BL: It's a serious story, of course, and even a solemn story, but I think it’s important to point out that, at least in retrospect, Robinson’s teammates could sometimes see some humor in their circumstances. Carl Erskine recalled an experience along that line with a young fan ---

"You know, kids, they're honest. And when a kid came back three times for my autograph I said, 'Why would you want three of mine?' Well, he was honest and he said, 'Actually, I want six. If I can get six of yours, I can trade it for one of Jackie Robinson's."

That story seems to speak to Robinson’s popularity among young fans, no matter the color of those fans.

KB: Exactly. There was a sweet spot in '47 and '48, before Jackie no longer had to turn the other cheek, where he was so hugely popular. And I don't think he ever lost the popularity among young fans and particularly Brooklyn Dodger fans. And I think we can just appreciate what it was that he accomplished. You know, Sarah Burns and David McMahon and I, we are the co-directors and co-producers of this film, and, in fact, Sarah and Dave wrote the script.

We were interested in trying to liberate Jackie from the kind of oppression of the syrupy mythology that sort of waded him down and to reveal the more nuanced and complicated dimensions to this story that we think made Jackie Robinson more interesting. And I think we realize how contemporary this story is: that it's about the Confederate flag, it's about driving while black, it's about stop and frisk, it's about Black Lives Matter, it's about burning black churches. It's about all the things we're talking about now, and so I think there's a wonderful conversation between the past and the present and it sort of makes real what Harry Truman said, "The only thing that's really new is the history you don't know," or even Faulkner, more bluntly, "History is not was, but is."

BL: Robinson’s oldest child, Jackie, Jr., was arrested on drug possession charges in 1968. Before his son went into rehab, Jackie was interviewed by a reporter. I want to listen to just a little of that.

JR: Well, I think this is maybe a big problem with me. I was constantly going and coming home late in the evenings basically tired and feeling that my home and my family was basically secure - that we wouldn't have the type of problems that maybe somebody else had. And I think we probably neglected the needs of our own children.

[Reporter]: And yet you reached a lot of other kids

JR: Well, I don't know. I find it pretty difficult to find how I can reach other kids if I can't reach my own.

I wonder if the most significant achievement of the film might be to have presented Jackie Robinson as a vulnerable man, thereby making what he accomplished really that much more extraordinary.

KB: I am so blown away by his honesty. We all know the celebrity kid thing. But to have the father so freely acknowledge his own failings or having missed the possibility to have done the transformation of the new generation in the place where he now realized it mattered most - in his own family. Having assumed that he and Rachel, with the best of intentions, had created a loving environment, and they had. And I think what's happening in that painful moment for any father, let alone a huge and well known public figure, is that being hoisted in a way on your own petard and Jackie willing to face it directly. I find that such an amazing moment in the film, and I'm so happy that we found the space within an already complicated story to complicate it even further with that.

BL: Do you think Robinson was at peace with himself when he died at the age of only 53?

KB: At the very end of his life, he's saying that, 'I never had it me. I was a black man in a white man's world.' And I think that it could be interpreted as a kind of pessimistic statement. And I hope that's not true because when you realize the effect that he's had, just think of it. There is no other sport in which the number of one man is retired in all 30 stadiums, but that every single April 15, everybody — from the bat boy to the coach at third base or first base to the manager to the players out on the field — on both teams wear the number 42 in acknowledgement of what he had done.

In some ways, he can have been disappointed at the end, but we can all take comfort in the fact that he's changed our lives. And I don't know how to answer that. It hurts me to my core that he might have died, in some ways, feeling incomplete. If he could only come back onto the ball field this April 15 and watch and see what happens in every professional ballpark in America, you'd understand that Jackie Robinson isn't just the most important person in baseball. He's just one of the most important Americans who's ever lived.