Forty years ago, at the 1976 Summer Olympics in Montreal, Nadia Comaneci, a tiny, slender Romanian gymnast, was preparing to wow a worldwide audience.

At the Games in Rio, gymnasts will once again be among the brightest, most celebrated stars. Some of them will, no doubt, earn appreciation similar to what Nadia Comaneci received in 1976.

But no matter how spectacularly they perform, no matter how much appreciation they receive, none of the gymnasts in Rio will earn what Nadia got: a “perfect 10.” Which is not to say that on that day at the Games in 1976, Nadia Comaneci didn’t deserve that score. 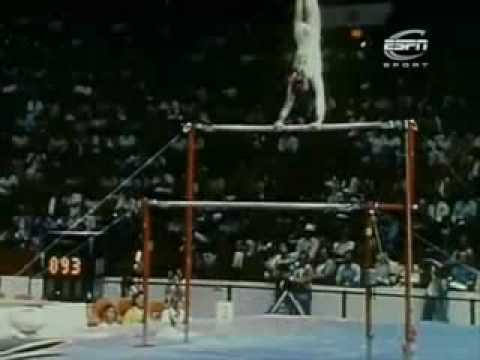 "For her time and for that day, there was no one better, and no one could have done it better," said Hardy Fink, one of the judges that day.

It was Fink's first time judging an Olympic competition. He is also a former gymnast, and he’s currently the director of education programs for the International Gymnastics Federation. But even as he was judging Nadia and finding no reason to deduct even the smallest fraction of a point from her performance, he was convinced that the "perfect 10" was a flawed number — and that the digits below it had problems, too. That conviction began when Fink was still performing as a gymnast for Canada, and watching his more accomplished competitor, Eizo Kenmotsu of Japan.

"He was so far ahead of everyone else with what he could do, just in pure difficulty — the first triple twist on floor and this incredibly complex horizontal bar routine he did without any intermediate or intervening small elements," Fink recalled.

Flourishes didn’t count extra. In those days, the idea was to fulfill the required elements without making mistakes.

"I could do the minimum requirements and if I performed perfectly I would have got a 10," Fink explained. "And he did so much more than me, and all he could get was a 10. He couldn’t even get a 10.1 to show he was better than me."

Fink thought that was unfair. In fact, he told me he thought it was insane. And just a few years after Nadia’s "perfect 10" made her the darling of those ’76 Olympics, Fink was proved right.

She argues that the 10 was doomed by the proliferation of allegedly perfect performances.

"The difficulty really, really escalated in the 1980s, and what I think happened was that the judges were, in a sense, searching for ways to reward innovation," Meyers said. "But all the scores are capped at 10."

Sometimes, as in the men’s finals at the 1981 Gymnastics World Championships in Moscow, the judges backed themselves into awarding 10s.

"In '88 we had a three-way tie on pommel horse again with 10s. It became stupidity."

In response, Hardy Fink, who says he loves math, came up with a system that would — among other things — reward more difficult routines.

The International Gymnastics Federation allowed Fink to test his system on the junior men’s competition in Canada, but that was as far as it went.

"It was abandoned, because ultimately the FIG, at that period of time, decided through a vote not to adopt it," Meyers said. "This matter had been resolved, and they were going to keep the 10."

Maybe that was, in part, because in an imperfect world, people watching gymnastics — or anything else — like to feel they might see something perfect. But Hardy Fink had kicked the door open, and as the 10s continued to mount up, they became less and less special. Eventually, inevitably, as Dvora Meyers explains, the system was rejiggered into something resembling the Fink model.

That’s the way it will work in Rio. But don’t get used to the particulars of that system. Hardy Fink doesn’t know how long it will last.

"My guess is it will continue for maybe two more cycles at most, because it’s also going to collapse under its own weight," he said. "I don’t think the rules have become more complicated as much by necessity as by short term, quick-fix decisions that always had unintended consequences that then needed another quick-fix decision. So kind of the band-aid approach."

So perhaps the best strategy for spectators who are unlikely to entirely understand the scoring is simply to watch, sometimes with their jaws on their chests, and let the judges worry about the numbers. Because when I asked Dvora Meyers, who has written a book titled "The End of the Perfect 10," whether there might ever emerge a stable, permanent system for evaluating what those gymnasts can do, she chuckled.

She thinks it has, but she doesn’t know. Hardy Fink doesn’t, either, and who knows more about it than he does? And you know what? It’s not going to interfere in the least with my admiration for the way those women and men perform on the bars, the beam, the rings, the pommel horse or the floor in any way whatsoever.