So, everything's big in the Olympics, right? From 6-foot-4 Michael Phelps and his 28 medals to the height of Simone Biles' tumbling passes — they're all big. Except this is a story about the little guys. Guys like Brian Gleason, vice president of a supplement company called Previnex.

The Challenges Of Rule 40

So you can understand why, when five athletes sponsored by Previnex qualified for Rio, Gleason was pretty excited.

"I hadn’t done anything in the Olympic space yet, so I was not aware of Rule 40," he said. "Neither was our CEO."

Back in June, Gleason and his CEO were at a beach volleyball tournament in New York when an agent sat them down and explained the bad news.

"We were kind of like, ‘Woah, wait, what?’ You know, we had all these grand plans," Gleason said.

So what is this grand-plan-destroying Rule 40?

Also "medals," "games," "performance," "victory" and ... "summer." Yes, the IOC has banned any commercial entity not one of its 11 official sponsors from mentioning "summer" during the Olympic blackout period, from a few days before the games until a few days after the closing ceremonies. Mention any of these words in ads or on social media and you just might receive a cease and desist letter from the USOC.

"I mean, it’s pretty extensive," Gleason said. "I was kind of surprised that we're not even allowed to, for instance, like retweet a tweet from Team USA."

"You know, we sent out a tweet that was, 'Wishing best of luck to unnamed volleyball player who will be playing at 1 p.m. in Brazil. Go get 'em, unnamed athlete,'" Gleason said.

This is pretty common. Ad executives at Ford reportedly brainstormed words they could use that weren't banned. They came up with "fit," "active" and "strong."

It hasn't always been like this. The rules used to be a lot more relaxed. And then...

Michael Johnson And The Golden Shoes

"Michael Johnson and the golden shoes created the rules that we have today. It really kind of changed the face of Olympic marketing at that point," said Joe Favorito, sports marketing consultant and professor at Columbia University.

Michael Johnson was the "it" athlete of the 1996 games in Atlanta. And he was signed by Nike. But Reebok was the official sponsor. So Nike came up with a plan centered around a pair of $30,000 racing spikes. 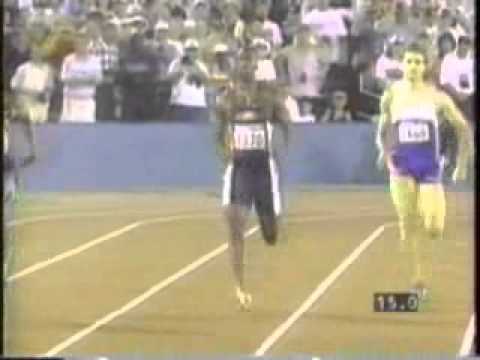 NBC ate it up — cutting from the obligatory Michael Johnson fluff piece to a live shot of those shoes at the starting line of the 400 meter final.

"Bright, bright shoes," Favorito said. "Not only that, there was an entire, kind of, guerrilla marketing plan that was built around it to drive attention to what they were doing without ever saying that Michael Johnson was participating in the Olympics and they were an Olympic sponsor."

Nike also gave fans free Nike flags that they could wave around for the cameras. Favorito says he thought the campaign was "brilliant." The IOC didn't agree — and neither did Reebok, the company that had paid for the official sponsorship.

"And now what I think you see is the IOC and the USOC taking even more steps to make sure that people really can’t do the guerrilla things that you could do before," Favorito said.

But where does that leave the little guys? The ones who can't afford the $150 million to $200 million it takes to be an official Olympic sponsor?

"The problem I have is it's where they drew the line," said Michael Kaplan, co-owner of Zerorez, a carpet cleaning company in Minneapolis. "It’s just — to not be able to talk about the games or use the word ‘summer’ in a post. I mean, it’s just, it’s too much."

"We’re a lifestyle company and our social presence is all about community and current events and of course carpet cleaning," Kaplan said.

So when something cool is going on at the local arts center, Kaplan's company tweets about it. When people are debating which is the best burger in town, his company weighs in. And, Kaplan thought, the same would be true come the Olympics.

"We weren’t going to have ‘gold-medal carpet cleaning special,’" Kaplan said. "We just thought it’s part of what people are talking about, people are obsessed about it, and for good reason. And we had an expectation that we would be part of that conversation at a very local level."

Kaplan doesn't have a lot of followers on Twitter. At last check, he had 269.

"I would say that we are big for the carpet cleaning world but we are just a tiny little thing in the sea of commerce," Kaplan said.

But whether a company has 200 Twitter followers or 2 million, the rules are the rules.

"We wouldn’t even be able to congratulate any of the 11 Minnesotans in the games. To me, that really hit a nerve," Kaplan said. "It felt yucky, to use a very grown-up word. It felt yucky."

"Why not just do what everyone else does and kinda skirt the rules and make due?" I asked.

"We got a bug up our butt, we got frustrated, and it would’ve been easy to sit on the sidelines, but we really felt that it’s just wrong," Kaplan said. "It feels so contrary to what the Olympics are about. I’m not the guy who watches every event, but I love it. I mean, it’s a chance to escape and kind of remember our humanity. It’s a chance to get away from the political conversations and the conversations about ISIS and terrorism, and there’s so much going on in the world today, it’s easy to be cynical. I was sick of being cynical."

So, Kaplan sued, saying his company's First Amendment rights had been trampled. He says, he's not looking for a paycheck. He's not claiming that his company's profits have been damaged in any way. He just wants a court of law to offer clarification on whether the IOC and USOC really can keep him from tweeting the word "summer" during three weeks of the summer.

And yes, he knows that his company is very, very small and the people he's up against are very, very big.

"Fortunately it’s not about how many attorneys you have on your team. I’m sure that they have many, many, many," Kaplan said. "We have smart people and we think that the law’s on our side. People who are law professors and state senators and people in the legal world – I’m not going to say that every voice has said, ‘Yeah, this makes sense.’ But overwhelmingly what I’ve seen is that people really believe that this is an overreach by the USOC and that it’s a big deal. It’s bigger than us. Yeah, we’re tiny, relative to the USOC, this monster body. But I don’t think in this type of circumstance, that really matters."

Kaplan says his lawyers and the USOC are currently sparring over technicalities — he's not sure if that's a delaying tactic or just how these things work. And he knows that his lawsuit came too late for Rio 2016.

But Pyeongchang 2018 is just around the corner and "winter" is on the list of banned words.