"I mean, he was decent, I suspect," journalist Simon Kuper says. "Dutch soccer, Dutch sport, then was all amateur. But he was good enough to briefly play top-division soccer in the Netherlands, to play in the Feyenoord Stadium, the biggest stadium in the country. So he was in the game. He was a player, but not a star."

Stad was also a successful track athlete and a ladies’ man who loved adventure and a little bit of danger. His physical fitness and ability to live on the edge helped him as a Dutch resistance fighter and as an inmate at several concentration camps ... and when he took 10 bullets.

"It’s a remarkable story of resilience, which I think speaks to some inner force within Stad," John Brown University professor and Holocaust historian Kevin Simpson says. "He had some reserves. His body was able to endure those injuries."

By 1939, Holland had enjoyed over 120 relatively peaceful years. But Nazi forces invaded The Netherlands on May 10, 1940. By May 14, Rotterdam had been nearly obliterated. Fortunately for Stad’s family, they had moved in 1939 from Rotterdam’s Jewish Quarter to The Hague, which at the time remained relatively intact. Unfortunately for them, Dutch citizens were forced to register shortly after the Nazi occupation began.

"Many of his family registered as Jews saying, 'Well, you have to do this,'" Kuper says. "And most of them in the end were killed, like 80 percent of Dutch Jews were."

It was a complicated time. Stad’s family, like many others, hoped that registering truthfully as Jews would keep them in the good graces of the Nazis. But Stad and some others knew better.

"When he went to register, he knew the clerk, and the clerk said 'You’re Jewish, aren’t you?' And Stad said, 'No, no, just give me a normal pass,'" Kuper says. "He took on the surname of his stepfather who was a gentile, whose surname was 'Bouwens.' So he went around as Bouwens, and that made him less visible as a Jew, which was his aim."

Very few of Stad’s Xerxes teammates knew he was Jewish. He was terrified someone would find out. By 1941, the Nazis had banned Jews from participating in sport. So Stad or, rather, "Bouwens," left first division Xerxes for a less popular third division squad where it was less likely he’d be outed. And he began a second double life as a member of the Dutch Resistance.

"He helped place Jews in hiding places. He says he helped the nephews, or great nephews, of Albert Einstein hide in the Netherlands," Kuper says.

This was dangerous business. In the murky underworld of the Resistance, there were Nazi collaborators looking for Jews and for the people who hid them.

"There was a Jew called 'Weinreb,' who was a German of Austrian origin, who hid Jews but then would betray them to the Nazis for money," Kuper says. "So Weinreb was a terrible collaborator who sent many people to their deaths. And Stad at one point found himself working in the same organization as Weinreb."

Stad accepted an assignment from Weinreb to escort a Jewish woman and her child to a safe house in Amsterdam.

"He arrived at a house," Kuper says. "And somebody said to him, 'Don’t go to that house. It’s been betrayed.'"

"He was kind of sliding between the law and just trying to survive while also taking huge risks in the Resistance."

Stad retreated and rode the train with the woman and child back to The Hague. Decades later, the Dutch government branded Weinreb a traitor. Stad remained active in the Resistance. And he took bigger risks.

"He said that he and a friend once drowned two drunken German soldiers in a canal," Kuper says. "So he was living on the edge. He was very much a lawbreaker. And that was unusual in the Dutch Resistance, because what it mostly did was deliver illegal newspapers, which gave people the non-Nazi news. But he actually went further both in hiding Jews and in violence actions and killing people. So he was kind of sliding between the law and just trying to survive while also taking huge risks in the Resistance."

Meijer Stad was a patriot. But Stad may have created dangerous double lives for himself for other reasons. Simpson and Kuper agree on that.

"There’s something about him that says, 'I’m gonna make my own way,'" Simpson says.

"He was in semi-criminal circles in parts of the war," Kuper says. "He had a gun, which was very rare. There were girls. He remembers lying on the beach outside The Hague with friends, remembers burgling storehouses at the harbor, selling cigarettes on the black market. So he was a young man, and I think he had a very exciting war."

But in spring 1944, things perhaps got a little too exciting. After he spurned the advances of a friend’s wife, she turned him in to Nazi officials. Stad was deported to an internment camp in Vught, Holland.

"But they didn’t know that he was Jewish," Kuper says. "They just knew that he was a Resistance man. So he was interrogated in prison, was beaten up."

The guards at Vught had a reputation for exceptional cruelty. When Stad arrived, he might have feared that he’d suffer the same fate as many of his fellow Resistance fighters: summary execution in the surrounding woods. But German authorities recognized Stad as a soccer player and placed him on the prisoner’s team.

Stad scored a goal early in his first game and then collapsed on the field. Malnutrition and disease were common at Vught. But Stad’s reacquaintance with soccer would be brief, and his fortunes took a terrible turn.

In September 1944, as Allied forces pushed into Europe, he was deported from Holland to the German concentration camp Bergen-Belsen, and then transferred to Buchenwald. It was well known at the time that soccer had sometimes flourished in those death camps. Perhaps Stad hoped to play there as a brief respite from the drudgery of camp life and hard labor. 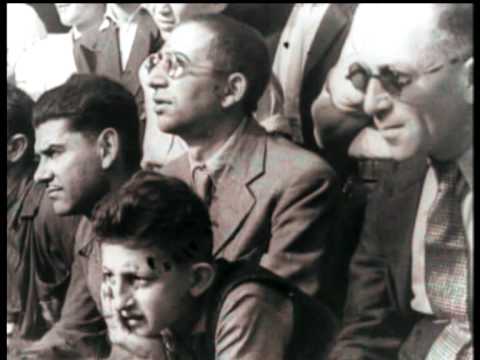 "The players who played in these factories of death, almost always had privilege," Simpson says. "Sometimes if you were a well-known player, word might have traveled ahead of you. And so, when you arrived in a place you were a known quantity because of your sporting expertise, and you were pulled into some teams very quickly."

But Stad was not that fortunate.

Stad worked the last few months of the war at a salt mine outside Buchenwald.

"And just before liberation, he and the other miners who were prisoners were told they were going to Buchenwald, the concentration camp where they’d been," Kuper explains. "But then suddenly the train stopped, and the doors opened. And the soldiers opened fire at them. And Stad jumped from the train. And the last thing he remembered was a burning pain. And then he came to in the sick bay at Buchenwald with about 10 bullets in his body. And it turned out that he and the other miners who had been murdered had been returned to the camp. And the nurses were charged to incinerate these bodies.

"And they found that Stad wasn’t dead. And so the nurses swapped him for a corpse from the camp. And they smuggled him into the sick bay, and his wounds were dressed with rags. And a French prisoner, who Stad said was a former professor of medicine, removed the bullets from his body with a penknife, mostly from his arms and legs. And one bullet had glanced off his head. And Stad showed me the bump on his forehead where there’s still a mark. And so, miraculously, he had survived this."

Meijer Stad eventually made it home to Holland. He never again played high level soccer. But he would win a couple of 3,000 meter races, establish an ad agency and become a millionaire. He stashed money away because he was afraid the Nazis would come for him again.

Stad died in 2005. But Simon Kuper met him in 1999 when he was researching his book, "Ajax, the Dutch, the War: The Strange Tale of Soccer During Europe's Darkest Hour."

He describes Stad as friendly and fun loving, at least on the surface. Stad loved to tell the story of how he, through his business contacts in Argentina, almost placed a young Diego Maradona on a Dutch team. And he spoke often about how his athletic training gave him the physical strength to survive the war. But there was another side to Stad that emerged by the end of it.

"He was in the sick bay in Buchenwald with a Belgian," Kuper says. "And the Belgian said to him, 'I’m going to die. But you’ll survive. And afterwards, you’ll always be happy, because things will never be as bad as they are now.' And the Belgian was wrong. Stad was never happy afterwards. Or never fully happy. So I think it’s a lesson of the horrors of persecution, the horrors of conflicts, and how it can happen in the most peaceable and unlikely places. And so what I think what he got from that, and what I got from that is just the fragility of peace and happiness and stability. It can be gone in an instant."

Learn more about soccer during the Nazi occupation of Europe in Kevin Simpson’s newly released "Soccer Under the Swastika: Stories of Survival and Resistance During the Holocaust."