It’s 1928. The setting is Thornton Township High School, which isn’t far from the train line that serves Harvey, Illinois. Sixteen-year-old Betty Robinson leaves school and realizes that if she doesn’t hurry, she’ll miss the train.

"And it just so happens, her science teacher was waiting for the same train," says Roseanne Montillo, who has researched and written about Betty Robinson's story.

That science teacher, a fellow named Charles Price, was a former runner and the coach of boys’ track team. He recognized that the girl running for the train was pretty fast. But not — he thought — fast enough to catch it.

"And when he got into the train, as the door closed, he was really surprised to find this young woman — Betty — sitting right next to him," Montillo says. "So he knew that he had someone really, really special on his hands."

There was no girls’ track team at Thornton Township High. But when Price suggested to Robinson that she let him time her as she ran down one of the corridors at the high school, she probably didn’t need much convincing. She was a happy-go-lucky kid who played the guitar and acted in the school plays. Her father was a banker. She had a supportive family delighted to see her succeed — apparently without effort — at whatever she tried.

Within a few months of outrunning Charles Price’s expectations, Betty Robinson qualified for the 1928 Olympic Games in Amsterdam.

Her timing couldn’t have been better. Before 1928, the Olympics hadn’t included track and field events for women. Women could swim. They could compete at archery. They couldn’t run. And after they reached Amsterdam in 1928, some of them still couldn’t run.

"The U.S. team got a little bit carried away on the ship," Montillo says. "There was a little bit of booze going around. And there was a lot of food. Especially, they were partial to ice cream. They really indulged. So they ended up gaining an awful lot of weight."

Perhaps because Betty Robinson was only 16, the ice cream didn’t slow her down. Good metabolism, maybe.

Anyway, she was the only U.S. runner to qualify for the final of the 100-meters, which still didn’t mean getting to the starting line for that race was a sure thing.

The gun went off, and 12.2 seconds later, the first Olympic 100-meter dash for women was history. It looked to fans of the Canadian team as if their star, Fanny Rosenfeld, had broken the tape.

"And the Canadians were celebrating, the Canadians were throwing their girl up in the air. And even Betty had figured it out that she had come in second. And she was thrilled with that," Montillo says. "Until the numbers went up, and she had won the first gold to be given to a track and field woman." 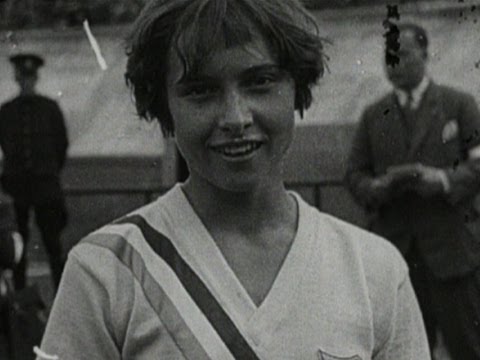 Shortly after that, Robinson, who’d initially seen running as a lark, began to take what she’d accomplished more seriously.

"When she returned from the 1928 Olympics, Betty had set out sort of a road map that she wanted to follow," Montillo says. "1928, she won her gold. 1932, she would win a second medal. Gold, of course. I mean, what else would you win? And in 1936, she would go on to be a coach. Or maybe, if things didn’t go so well, she would be an assistant coach. Something terrible like that."

It might have worked out just that neatly if Betty Robinson hadn’t decided on one hot afternoon during the summer of 1931 to interrupt her training with a ride in an airplane.

'The Man Who Found Her Believed Her To Be Dead'

Her cousin Wil, an experienced pilot, assured her it would be cooler up among the clouds, and maybe, for a time, it was.

"People still don’t know how it happened, but the plane that they were piloting suddenly stalled, just outside of Chicago," Montillo says. "And they plunged to the ground."

Wil survived, though his legs were crushed.

When Betty was found, she was unresponsive. She was bleeding from a head wound.

"The man who found her believed her to be dead," Montillo says. "And he took her, not to the hospital, but to an undertaker."

One of Betty’s legs was twisted, broken in three places. Her left arm had been shattered. There was a deep gash over her right eye.

But the undertaker was an observant fellow. He noticed Betty was breathing. Still, the first doctors who saw her said she might not walk again, let alone run.

During the weeks after she finally left the hospital, Betty often didn’t want to get out of bed. Her brother-in-law had other ideas.

"And so, every morning, he would wake her up, and just go and take her for a walk," Montillo says. "And initially, it was just a couple of steps outside, maybe go down the street. And eventually, he would make her run a few steps. In time, those few steps turned out to be a short run around the block."

It would be great fun if running around the block had led directly to sprinting 100 meters, but it didn’t. Betty began training harder, then a little harder still, on a rehab program that would last for most of the next five years. But her injuries prevented her from getting into the crouch that sprinters must assume at the start of a race.

"The 100-meters was gone," Montillo says. "She had to adjust her sight on, maybe, becoming part of a team."

As long as she wasn’t the first runner on a relay team, she wouldn’t have to crouch.

"Once she had that moment of realization, it had a huge impact on her state of mind," Montillo says. "It also had a huge impact on how she saw the sport, and how she saw her teammates, as well. Before, she hadn’t really given an awful lot of thought about it. They were just girls. But now, these were women who made huge sacrifices to get where they were. And she would have to be one of them."

Another Chance At Olympic Gold

Competition for the U.S. team that would go to the '36 Olympics in Berlin was stiffer than it had been in 1928. And that wasn’t the only obstacle Betty Robinson faced.

The U.S. Olympic Committee funded the men’s track and field team, but they told Robinson and some of the other women to come up with their own travel money.

"Her medical bills had taken a huge toll on the family," Montillo says. "Her father had lost his job at the bank. The Great Depression was in full swing. She had to sell pretty much all she owned."

Betty Robinson sold the ribbons and pins she’d collected at the '28 Games, though she held on to her gold medal. She found work as a secretary and saved what she could.

It turned out to be enough.

She made it to Berlin, and apparently it was evident that she was happy about that. The New York Times nicknamed her "Smiling Betty."

But she wasn’t in Berlin to smile. She was there to run.

"She knows that this is likely her last Olympics," Montillo says. "She has this feeling that she’s meant to be there at that particular moment in time."

Betty was the third runner in the 4x100 relay. By the time the baton came to her, the German team had taken the lead.

Betty kept it close, and shortly after she passed the baton to Helen Stephens, who would run the final 100 meters, Robinson and her teammates got the break of a lifetime.

Ilse Dörffeldt, Germany’s anchor runner, unaccountably broke a rule relay runners learn early: She tried to shift the baton from one hand to the other. She dropped it. Helen Stephens raced by her. The U.S. team won. Betty Robinson had a second gold medal.

Robinson eventually married a businessman named Richard Schwartz. They had two children and lived quietly.
In 1971, the U.S. Olympic Committee inducted Betty Robinson into their Hall of Fame.

Roseanne Montillo thinks the USOC got it a little wrong.

"I think she should have been honored many years earlier than that," she says. "She opened up the doors for all track and field athletes. She showed that track and field could be fun, could be glamorous, could be dramatic. It could be viewed as something viable for young ladies."

True enough, at least for young ladies determined to overcome a plane crash, the prognosis that they’d never walk again and whatever the Depression could toss at them. Because Betty Robinson did all that.