In 1959, Renee Powell was a teenager in Canton, Ohio. Her sport was golf, not tennis. But even she appreciated just how big a deal it would be to meet the Althea Gibson.

Gibson was one of the most famous athletes in the world. In 1950, she became the first African-American on the U.S. tennis tour. By 1959, she'd won Wimbledon and the U.S. Open. She'd shaken hands with the Queen of England — even had a ticker tape parade in New York City. And now she was stopping in Powell's hometown for a table tennis exhibition.

Powell's parents took her to the event, hoping their daughter might get to meet the tennis star.

"And by the time we went backstage, she had already gone," Powell says. "And didn't meet her. I was so disappointed."

A year later, Powell traveled to Boston to play in a tournament arranged by the United Golfers Association. (The UGA was an organization for black golfers.)

At first it seemed like any other UGA tournament — and then Powell learned the name of her playing partner.

"I was paired with Althea Gibson," Powell says with a chuckle. "So it was like, 'Really? Wow. Here she is on the golf course.' "

The world famous Althea Gibson had left tennis in the prime of her career and turned to golf.

Althea Gibson was born in 1927. She was the daughter of sharecroppers from South Carolina.

But Althea grew up in Harlem — on 143rd street. Back then, 143rd was classified as a play area for children by the Police Athletic League. Here, Althea’s love for sport was nourished, but so was her penchant for trouble.

"So her upbringing was literally on the streets of Harlem," says filmmaker Rex Miller, who has made a documentary about Althea's life.

Her father, Daniel Gibson, believed Althea could become a great athlete — and he was tough.

Some days, he would take her up on the roof to box. He thought she could someday make a living fighting.

But it was Althea’s street cred at paddle tennis — a sport popular with New York City children — that caught the attention of Buddy Walker, a man who played in the house band at Sugar Ray Robinson's bar in Harlem

"And he saw her ability, and he brought her out of the play streets and took her to the Cosmopolitan Club," Miller says.

This was a black tennis club in Harlem that catered to lawyers, doctors and professors.

Althea, whose life was more hard-knock than country club, had a hard time fitting in.

"As they like to tell the story, she was a little rough around the edges," Miller says. "But a lot of folks at the Cosmopolitan Club mentored her, not only in tennis, but also just how to conduct herself in this new group of people that she was being exposed to."

Althea’s favorite word, according to those close to her? "No."

Still, Althea excelled on the tennis court. She was so dominant that she caught the attention of two black doctors from the South.

"They were both self-described 'Race Men,' interested in breaking barriers, early participants in the Civil Rights movement," Miller says. "They saw in her the Jackie Robinson of tennis. So when she was 18, they came to her, and they said, 'We think that you could get into Forest Hills,' which was the U.S. Nationals, the precursor to the U.S. Open. 'We think that you could play Wimbledon. And we'd like to help you get there.' "

Althea agreed to move to Wilmington, North Carolina, to train. Over the next four years, she attended a local high school and practiced tennis on a court behind the house of one of her sponsors. In 1949, she enrolled at Florida A&M University on a full athletic scholarship. A year later, at the age of 23, she became the first black woman to play at the U.S. Open. In 1957, Althea won Wimbledon, becoming the first African-American to do so. Soon after, she won the U.S. Open. She had become the No. 1 player in the world.

But against the hopes of the doctors who had supported her, Althea didn't speak out about race relations in the U.S.

"She was very much a reluctant icon," Miller says. "She was just used to saying 'no.' Plus, it's one thing in the late '60s when the civil rights movement was embraced more by mainstream America. But in the '50s, I mean, you're talking about Emmett Till and Brown v. Board of Education. Speaking out was not only something that could get you ostracized, but it could also get you killed."

And despite Althea’s success on the tennis court, she struggled financially.

Back then, there was no prize money in major tennis championships, and the opportunity to earn a check competing in open tournaments did not come until 1968.

Althea lived with roommates, she had no real income, and she survived off the generosity of others.

In 1958, Althea decided to move on from tennis.

"She was clearly the most dominant player of that era," Miller says. "And she would've kept going — she could’ve won multiple titles over the next few years, but she quit because she had to go make a living."

After a year with the Globetrotters, she tried singing. 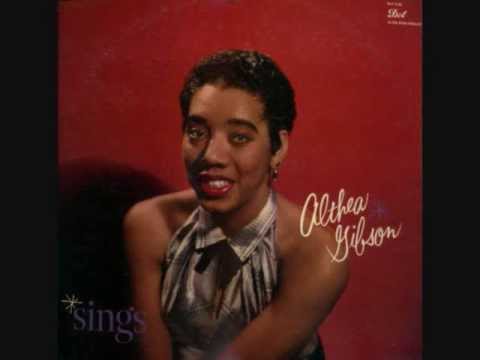 "She sang on 'The Ed Sullivan Show,' " Miller says. "She cut an album with Dot Records of Jazz standards, but it didn't go anywhere for her.

She even appeared in a movie with John Wayne, "The Horse Soldiers."

Althea still wasn’t able to make a living, so in 1960, she turned to a sport she’d picked up at Florida A&M: golf.

At the time, there wasn’t much money in golf. But at least she’d have the chance to earn a little money.

So that’s how Renee Powell, the young Althea fan from Canton, Ohio, finally had the chance to meet her on the golf course in Boston.

"Althea would hit the golf ball. It was amazing. She was so strong," Powell says. "Because she would hit it — it didn't go high. It went low. But it went. It kept going."

But in 1964, Althea earned a spot on the LPGA, and became the first black woman to join the tour.

Those were not easy times for African-Americans — and it was no different on the golf course.

"First of all, she was not invited to the social events, ever," Miller says.

"There were tournaments where she wasn't even allowed to use restrooms. She had to change her shoes in the car,"  Powell says.

"There was one incident when Althea had gone to a hotel. And they couldn't find her reservation — they conveniently lost her reservation," Powell says. "And Marlene walked in, and Althea had been trying to register, and Marlene said, 'What's the problem, Althea?' [Althea] told her what was going on. And Marlene said, 'Well, Althea, just stand here for a second.' Marlene registered. Then she asked the person behind the desk, 'I need two keys.' And so right in front of this person, she goes, 'Here, Althea.' She gave her a key. She said, 'You’re rooming with me.' "

'Her Sky Was Gray'

But Althea never found anywhere near the success she had in tennis.

With only one second-place finish, and a couple other decent finishes, she earned just over $19,000 over the course of her 13-year career.

"She never really tore up the golf tour," Miller says. "She struggled with traveling expenses and training expenses."

"I remember her telling me one time how fortunate I was to have had — you know, my family was my big support," Powell says. "And they were always there, and she relayed to me that she had been on her own since she was 14 years old."

Althea Gibson left the LPGA in 1977 and accepted a position as a tennis pro in New Jersey near her home. Gradually she became even more reclusive.

Renee Powell was one of the few people whose calls Althea would take.

"I could say 'What a beautiful blue sky,' and her sky was gray," Powell says. "So it was difficult having conversations in those later days because, you know, she was not in the happiest state of her life."

"And Althea said, 'Oh, I'm just calling you to say goodbye,' " Miller explains. "And Angela said, 'Goodbye, why? Where are you going? Are you leaving? Are you traveling?' And Althea told her the story about how she didn't have any money, her health was bad, and she just didn't see any reason to go on, so she was calling to say goodbye."

"A month or two later, Althea got envelope after envelope after envelope sent directly to her home in New Jersey," Miller says. "And, as the story goes, it was full of money from all different currencies from people who had watched her and fans who had admired her. So even though this came relatively late in her life, it still gave her a little bit of comfort."

After years of health problems, Althea died of respiratory failure in 2003.

While the world has known Althea as a tennis legend, her time in golf has been undervalued — but, still, her legacy exists.

Stackhouse is one of four black players currently on the LPGA tour along with, Ginger Howard, Sadena Parks and Cheyenne Woods.

Last year, Mariah played at the LPGA Cambia Portland Classic. She was on the putting green and noticed something.

"You know, I don't know how it started, but it might have been me and Ginger talking," she says. "And then Sadena pops up. And then, boom, there's Cheyenne. And we're like, 'Oh, wow, we're all here together right now.' "

It was the first time four black players were at the same LPGA event.

"We all got together to take a group picture to commemorate that moment and high-five each other and say, 'We're here.' "