Clive Nicholson was visiting his grandparents. He was 8, or maybe 10.

He doesn’t remember how the conversation got started, but someone mentioned that there had been a footballer in the family.

(This is England. Football means soccer. This is the last time I’ll clarify that point.)

Anyway, Clive didn’t think much about the notion that one of his ancestors had played football. This is England, after all.

But then someone went up to the attic and came down with a couple of Fred Spiksley’s football medals. They were the real deal.

Clive was intrigued. He wanted to learn more about the great footballer in his family tree, but nobody could answer his questions.

"He died in 1948," Clive says. "And their memories of him aren't as a footballer, they're more of the gambler. So they really weren't fully aware of everything that he'd actually achieved."

In addition to being a star footballer, Fred Spiksley was also a gambler and a womanizer.

"She met him when she was 18, and he'd been to the races," Clive says. "And he'd had a really, really good day. He came back with a suitcase full of 5-pound notes, all stuffed inside. And she remembers seeing him ironing these 5-pound notes with an old iron on the ironing board. And he never offered to give her a 5-pound note."

"That would be the equivalent of at least a 100-pound note today," Mark says.

"So, from that moment on, she was never going to like him," Clive says.

Clive went down to the local library and started requesting books on Sheffield Wednesday, the team Fred played for from 1891 through 1903 .

"And ever since then I've been researching and tracking his life, really," Clive says. 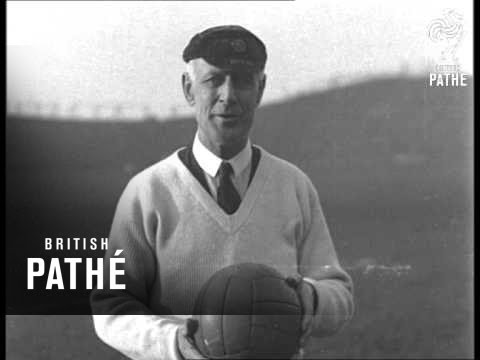 Clive started his research about three decades ago. About six years ago, he reached out to Mark for help. By then, Clive and his dad had gathered quite a bit of research.

'A Good Footballer' Pressed Into Service

Fred Spiksley was born in 1870, in the working-class town of Gainsborough.

"And his dad was a boilermaker in the local factory," Clive says.

"Every day he would dribble that little ball along the edge of the curb stones, trying to keep it on the edge, and dribbling it at speed," Clive says. "The rest of the street was cobbled, so you can imagine the ball bobbling about quite a lot."

Fred was soon known for his dribbling skills on the football field. And he came along at the right time. The sport became professional in 1885, when Fred was 15.

"His mom and dad didn't really want him to pursue the career as a jockey," Mark says. "It was a dangerous career."

"He, clearly, was a very, very bright man, except, of course, when horse racing slips were in front of him."

Instead, Fred’s parents secured him an apprenticeship as a compositor at the newspaper owned by Charles Caldicott, who was also the main sponsor for Gainsborough Trinity, the local pro football team.

Fred was expected to work at the paper six days a week for the next five years.

But after just two months, he asked for half a day off to go to the race track.

"There was no chance of Charles Caldicott agreeing to an apprentice taking the day off to go horse racing," Mark says. "So what he did is, he decided that he would ignore his employer’s instructions. He obviously had a grand day out."

The next day, Fred was sacked on the spot for gross misconduct.

"This was a disaster for Fred and his family, 'cause whilst being a compositor was a dirty, grimy job, it was nothing like as difficult as having no skills," Mark says. "By that time he was a canny footballer. That means good. He was a good footballer."

So good, in fact, that when the recently unemployed Fred Spiksley showed up to cheer on Gainsborough Trinity, he was pressed into service. The locals were short a couple of players due to illness and injury. Fred was 17.

"Fred was just a tiny, little dot at the time, 5-foot-3, and he was the star of the show," Mark says. "After that, Charles Caldicott suddenly realized that perhaps he might need him to play for his local team."

Caldicott was a smart businessman. He knew that if Gainsborough Trinity did well, he’d sell more newspapers. So he reinstated Fred’s apprenticeship. Fred was grateful.

"And he repaid his employer by taking the following day off to go horse racing, but he kept his job," Mark says.

A few years later, Fred’s skills had outgrown his hometown team. He signed with Sheffield Wednesday.

"Playing for Sheffield Wednesday, they weren't the biggest club in the country," Clive says. "They weren't really a fashionable club. The Aston Villas and the Sunderlands — they were the more fashionable, more wealthy clubs. And he could have played for any of those clubs."

But, from time to time, Fred relished the chance to play on an even bigger stage.

It was the England-Scotland game of 1893. The game was held at a place called Richmond Park.

Three of those in attendance were quite well known at the time.

"So the Duke and Duchess of Teck attended with their daughter, Princess Mary of Teck, who subsequently, obviously, later became the queen," Mark says.

Just in case it’s not obvious, Teck is in Germany. Three months after this soccer match, Princess Mary would marry England’s Prince George, after having previously been engaged to his elder brother, Albert Victor, who died unexpectedly of pneumonia. George would become king in 1910, upon the death of his father, Edward VII.

But I digress. Back to the football match.

"Scotland scored just after halftime to take the lead, 2-1," Mark says. "So the Scots were dancing around in their kilts and playing their bagpipes, and England were losing."

With about 15 minutes left in the game, England tied the score.

"The Scots were fading. It was a really hot, hot, hot day," Mark says. "And it was just at that point that Spiksley noticed, on the touchline where he was playing, the arrival of Princess Mary of Teck."

Mary was barefoot, running up and down the touchline, waving a handkerchief. This was not appropriate behavior for the future queen of England.

It was the first-ever hat trick by an English player against Scotland.

But the large crowd had blocked the reporters' view of the field. Newspapers failed to report Fred’s accomplishment. There was also no mention of Princess Mary’s scandalous behavior.

"But over the years, subsequently, people who were at the game started to report about what had happened," Mark says.

Trouble At The End Of His Career

Over his years with the "unfashionable" Sheffield Wednesday, Fred would lead his team to a league championship and an FA cup victory. Clive says, whenever Fred had the chance, he rose to the occasion.

"Even when he broke his rib at an FA Cup match at home, he stayed on the field and scored the winning goal," Clive says.

Off the field, Fred continued to be a bit of a mess. He was stuck in an unhappy marriage, and he still preferred time spent at the race track to time spent anywhere else.

"Things started to come back on him towards the end of his playing career," Mark says.

The year was 1901, and Fred was in urgent need of cash. A pawnbroker named Mrs. Bell agreed to lend him the money. But taking money from a pawnbroker wasn’t the kind of thing a proper gentleman would do.

So Fred asked a friend to be his go-between. Trouble was, when Fred tried to pay Mrs. Bell back, his friend pocketed some of the repayments.

"So Fred then took John Nash, he was called, to court — which, looking at it, probably wasn't the wisest move," Mark says.

"They weren't too kind to him," Clive says. "He wasn't particularly playing well. He was approaching the end of his career. The judge made a joke about him being heckled because they'd been heckling him on the touchline."

Fred’s reputation was ruined, and Nash declared bankruptcy, which meant Fred never got his money back.

"So, yeah, it wouldn't have been a good day for Fred, there," Clive says.

Fred faced a string of serious injuries. He never quite recovered, and in 1903, Sheffield Wednesday declined to renew his contract. He bounced around some lower-level teams for a while, then decided to try his hand at coaching.

"The job at Watford, where he'd been playing, was up for grabs," Mark says. "And he'd applied for it. And they got a letter from Sheffield Wednesday. The letter basically said, 'You've got yourself a really good coach, as long as you can keep him away from going gambling.' Fred was a proud man, and when this was put to him, he said in his spare time he could do what he wanted. So they didn't give him the job."

Instead, Fred joined the circus. No, really. He performed in a skit about football, alongside Charlie Chaplin. But before long he realized that teams all around the world were eager to hire coaches from England.

"There wouldn't have been, really, a bigger name than Fred's on that," Clive says."So he took himself off to coach the Swedish national team."

"And within a matter of a few weeks, he was teaching the Swedish players in their own language," Mark says. "So he, clearly, was a very, very bright man, except, of course, when horse racing slips were in front of him."

After leaving his mark on football in Sweden, Fred went on to coach in the United States, then Mexico, Peru and back to Europe. He was the first footballer to coach across three continents. And nearly everywhere he went, his teams won championships.

"Coaching abroad also meant that he escaped, by that point, a marriage which really wasn't working for him," Mark says. "I think he welcomed the opportunity to get out of England."

"There really isn't a more fitting place for Fred to have gone than at a race track," Clive says. "It was Ladies Day. He was on his way to get his winnings and he dropped down dead of a heart attack, holding the winning betting slip in his hand."

It took Clive Nicholson three decades to piece together the details of Fred Spiksley’s life. But he says, when his kids are old enough to learn about their great, great grand uncle, he’ll have quite a story to tell them.

Learn more in the book Clive Nicholson and Mark Metcalf have collaborated on, which is now being turned into a documentary: "Flying Over an Olive Grove: The Remarkable Story of Fred Spiksley, a Flawed Football Hero"