Jimmy Connors may be America’s greatest tennis player. Arthur Ashe may be its most influential. They couldn’t stand each other.

"Ashe really disliked anyone who had a kind of braggadocio, anyone who preened himself in the way that Connors did," says University of South Florida professor and historian Raymond Arsenault. "He just wasn’t one to attack anybody. He always gave everybody the benefit of the doubt. But as a member of his family told me once, the only person that he really didn’t like on the tour was Jimmy Connors."

One was brilliant but craven. The other, a quiet revolutionary with a powerful sense of patriotism.

The quarrel between Jimmy Connors and Arthur Ashe probably began with the Davis Cup, the annual international team tennis event that dates back to 1900.  According to Raymond Arsenault, their attitudes toward playing on the U.S. team were diametrically opposed.

"I think Ashe, it meant a tremendous amount to him," Arsenault says. "Because it affirmed his notion of self-worth. That he was a citizen — a proud citizen — and that he was respected enough to represent his nation."

Ashe was the first African-American to represent the U.S. in Davis Cup competition. He had played on the US team in eight different years by the time Jimmy Connors was dominating men’s tennis in the mid-’70s. But Connors refused to join the team. This irritated Ashe.

"He could never understand why Connors didn’t share any of that sentiment," Arsenault says. "That it didn’t mean anything to him. If he didn’t make money out of it, he didn’t seem to want to do it."

In June of 1974, Arthur Ashe was elected president of the Association of Tennis Professionals, a new governing body created to represent the interests of male tennis players.

"Well, there had never been anything remotely like a tennis players' union," Arsenault says. "And the national federations around the world and tennis promoters were really making all of the decisions. And the players felt that they were left out. That they needed a voice."

Connors refused to join the ATP. Instead, he kept playing as a member of World Team Tennis, or WTT. In 1974, WTT filed a $10-million lawsuit against ATP executives and a major sponsor of the European Grand Slam events for barring WTT players. Just hours before Ashe’s election as president of the ATP, Connors and his agent joined that lawsuit. Ashe was infuriated. So he wrote a letter ...

"To the members of the ATP, in which he described Connors as ‘brash, arrogant and unpatriotic,’ " Arsenault says.

The letter became public. On Jun. 21, 1975, just two days before Wimbledon’s first round began, Connors and his agent filed another law suit. This time, it was for libel, and it named Ashe and his letter specifically. Connors and his agent sought $3 million in damages. Ashe was fighting in — and on — more than one court.

"Wimbledon was really special to him," Arsenault says.

The 32-year-old Ashe had dreamed of winning Wimbledon since he was a young kid.

"And I think he pretty much knew this was his last chance," Arsenault says.

But Ashe also knew that might be wishful thinking. Jimmy Connors, nine years his junior, had won the 1974 Australian and U.S. Opens and was the reigning Wimbledon champ. He started the 1975 season by winning nine of the tournaments he entered.

"He dominated in a way that few players have ever dominated," Arsenault says. "He was thought to be unbeatable. Invincible, really."

Ashe knew there’d be a good chance he’d have to go through Connors to capture a Wimbledon title.

In mid-June of 1975, Ashe and Connors competed at the Nottingham Open, a pre-Wimbledon warmup tournament. Both lost in the quarterfinals. In a post-tournament press conference, Connors said that he had been just a little bit off his game ...

"But in the future, he would just crush his opponents," Arsenault says. "And to be honest, almost all of the journalists covering Wimbledon thought he was correct. But that statement just stuck in Arthur’s craw."

Ashe kept his anger to himself … for a little while, anyway.

"He filed it away," Arsenault says.

When play at Wimbledon got underway, Arthur Ashe and Jimmy Connors were in opposite brackets. They breezed by their opponents. Connors didn’t lose a single set. Ashe dispatched Tony Roche in the semis on July 3 and sat in the stands to watch Connors play Roscoe Tanner.

"Roscoe Tanner had the fastest serve in tennis," Arsenault says. "And every time he would hit these scorching serves or ground strokes, Connors would hit it back 10 miles an hour faster. When Arthur saw this, he thought ‘Oh, wow.’ If Roscoe can’t outhit him, then really no one could."

Connors defeated Tanner in straight sets. But while watching them, Ashe got an idea: What if he didn’t try to outhit Connors?

"Don’t give him any pace," Arsenault explains. "Just constantly take it off. Chip and lob — just drive him crazy. Hit low to his forehand volley, and that might conceivably work." 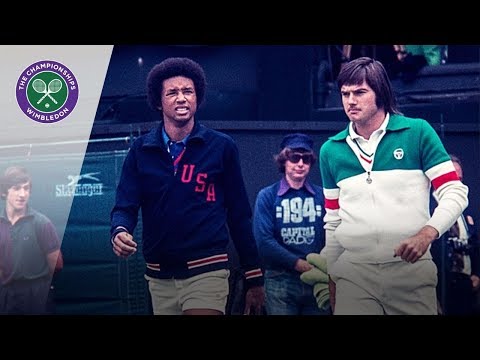 On the morning of Jul. 5, 1975, Jimmy Connors was the overwhelming favorite to defeat Arthur Ashe. When they took Centre Court, Connors’ gamesmanship was obvious.

"He had an Italian designer’s outfit on," Arsenault says.

But Ashe made a fashion statement of his own.

"Arthur is wearing the Davis Cup sweatshirt," Arsenault says. "Blue with red letters, saying ‘USA’. And it was a reminder that Connors had let his country down and let his fellow players down. I mean, that wasn’t like Arthur  to play those kind of mind games. But this may have been one of the times when he did."

It was also unlike Ashe to play a strictly chip-and-lob game.

"He killed him with kindness, with the slow ball, with the spins," Arsenault says. Don’t give him any pace. And you’ll drive him crazy. I mean, he won the first set 6–1. Connors wasn’t even in it. And Connors hardly won a point in the second set. The crowd is just stunned. No one thought this was remotely possible."

Down two sets to none, Connors came back to win the third.

“Well, here goes," Arsenault says. "Connors is gonna come back, and he’s gonna win three straight sets. And this fantasy of Ashe’s is going to be over."

In the fourth set, it looked like Connors would even the match at two sets apiece. But Ashe abandoned the chip and lob and reverted to his usual array of topspin backhands and well-placed forehands to build a 5–4 lead in the fourth set.

And then he put the match away.

"He turned to the crowd, and before shaking Connors’ hand, he raised his right arm and made a fist," Arsenault says. "Some interpreters thought that he was doing a Black Power salute. He said no. That he had no intention of that. But this was a moment, I think, that meant so much to him that he impulsively raised his arm."

Ashe had fulfilled his lifelong dream. In doing so, he had become the first Black man to win a Wimbledon singles title. After the match, Ashe, still angry at Connors’ lawsuits, stepped out of character again and suggested that his opponent had choked.

"That just drove Connors crazy when he heard that," Arsenault says. "Billie Jean King, you know, she won Wimbledon in 1975. And, by tradition, the two singles winners dance the first dance at the Wimbledon ball. Jimmy Connors, he said he’d come only if he could have the first dance — meaning he could be treated like the winner. And when he knew he couldn’t be, he didn’t show up."

Two days after the Wimbledon Final, Ashe reverted to his usual sportsmanlike self. He described Connors as a “nice guy” and “the best tennis player in the world.” A few days after that, Connors dropped the suit against Ashe.

"And so I think it’s probably a credit to Jimmy Connors that he did have enough common sense and decency to drop the suit," Arsenault says.

A lot was riding on the 1975 Wimbledon men’s final: the clash of personalities; the right of players to represent themselves; the right of governing bodies to determine who can play in what tournaments. But Arthur Ashe raised his game accordingly.

"I think that he realized he was on the biggest stage in tennis," Arsenault says. "He felt he was representing the ATP and that Connors was a threat to them.

"He wanted to make a moral statement as well as win the tournament.

"For many years, it was considered the greatest upset in Wimbledon history," Arsenault says. "I think it’s one of the great milestones in modern tennis."