It’s true. I’m a woman. And I don’t listen to sports talk radio. I try sometimes.

Once, I tuned in to find the hosts talking about Fox sportscaster Joe Buck’s wife. “She used to be a stripper,” one of them said. “No, no, no, she was a prostitute,” the other laughed.

For the record, Ann Buck was once an Indianapolis Colts cheerleader. But that doesn’t really matter. Her prior profession has nothing to do with her husband’s failings as a play-by-play guy.

You can’t blame me for not tuning in. If I did, I’d have to listen to what these guys in Boston think about women like sideline reporter Erin Andrews: 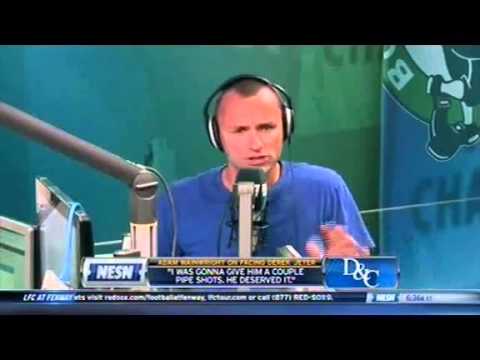 Over the years, I’ve developed this impression: Sports talk radio must not want me — must not want women. And it turns out, I was right.

This rant comes from a sports talk radio host in San Francisco:

"You know, there’s no doubt: A lot of sports has lost its way. And I’m gonna tell you — part of the reason is we’ve got women giving us directions. For some of you, this is gonna come across as very misogynistic."

Pro tip: No good can ever come from that disclaimer.

"See, here’s the thing. I’m willing to share my sandbox. As long as you remember: You’re in my box. I didn’t get into yours."

Did he really say that?

Not so long ago, a finance reporter named Jason Notte was driving down Route 26 heading into Portland, Oregon, when he tuned his radio to sports talk.

"After about the second strip club ad, a men’s testosterone clinic ad and an ad for a male-focused attorney, you know, they seem to be targeting somebody here," Jason says. "There’s certainly a specific audience that they’re going after. Is it me?"

OK, this might seem like it’s a no-brainer. And Jason was pretty sure he knew the answer, too. He talked to radio executives and to industry watchers. He wrote about it for the New York Times. And, as it turns out...

"Yes," he says. "Males above the age of 35 are right in the sweet spot of sports radio. Unfortunately, that’s me. I fall right into that demographic."

Jason wanted to talk to advertisers, too. The low testosterone clinics didn't want to talk to him, but he found one advertiser more than willing to talk.

Rick Jones is the managing partner of Goldberg Jones, a law firm that specializes in divorce — for men. The firm was founded 23 years ago in Seattle. Back then, most attorneys advertised in the Yellow Pages. But Rick was looking for a more affordable option. It was January — football season — and he found sports talk radio right away.

"We actually ran our ads, I believe for the first time, on a Sunday before opening our doors on a Monday," Rick says.

Rick says he advertises on some other radio stations — classic rock, that sort of thing. But nothing beats sports talk.

"When you were looking at the things that advertisers need to look at, which is the target demographic, the cost per ear, etcetera, and the ratings, it just really made sense to spend money on a sports radio station that has a listenership of in excess of 90 percent male," Rick says.

In many markets, sports talk radio doesn’t even break the top 10 when it comes to ratings. But their listeners are loyal … and they’re engaged.

"Dave from Hillsboro, who’s been calling in for the last 15 years," Jason Notte says. "And they know Dave’s taste. They know what steakhouse Dave likes to eat at. It's interesting to see the lengths they will go to keep both Dave and guys like Jones comfortable."

Just to be crystal clear, it’s not the misogyny that keeps advertisers like Rick Jones comfortable. He’s not a fan of that kind of thing.

But would whether sports talk radio be a less attractive advertising venue if 50 percent of its listeners were suddenly women?

"You know, the answer is probably yes, but let me explain why," Rick says. "If they had twice as many listeners as they do now, you can fully expect that the amount to advertise at the same level we do — same reach and frequency — would double in cost. And so the only thing that would change is that the cost would double.

Jason Notte talked to executives at ESPN radio, and he was surprised by their response.

"They seem very cognizant of the fact that this is kind of an antiquated approach, but it works," Jason says. "I think terrestrial radio, they’re basically ushering an entire generation along in a velvet coffin. They have the audience they have, they know they’re engaged, they know they buy things and they seem OK with that."

But there’s good news if you’re a woman who likes sports. Because, in some ways, “terrestrial” radio is being replaced by other things — podcasts and YouTube channels and Instagram and Facebook. And in those spaces, women aren’t just allowed — they’re welcomed.

ESPN is investing in podcasts with women behind the mic. I can now watch Andrea Kremer and Hannah Storm calling Thursday night NFL games on Amazon Prime. And this ad played during last winter’s College Football Playoff:

I’m sure this ad would inspire anyone who’s ever had a bad boss — but with that soundtrack? "9 To 5" is practically an anthem of second-wave feminism. That ad is targeting … me.

And it makes sense. Because on the TV side of things — as more and more people cut the cord — sports are pretty much the only thing anyone still watches live.

And this is where the strategy of keeping the advertisers happy gets turned on its head. I talked to Jennifer Storms. She’s the chief marketing officer at NBC Sports Group. And she says her main focus isn’t to attract advertisers.

"We want to make sure we are always serving our consumers," Jennifer says.

But when NBC sports looked at their audience — their consumers — they discovered that they don’t need to attract women to sports. Women already make up 46 percent of NFL fans.

"NASCAR — again, another 40 to 50 percent of NASCAR fans, they are women," Jennifer says. "So were not just wearing pink hats, were really into it."

"We took a look and then we said there’s a real opportunity here to serve women even better and even more authentically. And they are such large fans of our sports properties. How do we give them more avenues — more opportunities — to express their fandom and engage with us?"

Last winter, during the Olympics, NBC launched an initiative called “On Her Turf.” It’s a podcast, Instagram and YouTube campaign. And it’s not designed to attract women to sports. It’s designed to reach the women who already enjoy sports and inspire them to take on the world.

And in that spirit, I have something to say to that guy in San Francisco who said this:

"See, here’s the thing. I’m willing to share my sandbox. As long as you remember: You’re in my box. I didn’t get into yours."

That sandbox of yours? It’s getting smaller and smaller. But this one over here? The one I’m playing in? It’s got room for everybody.