You may have heard some of their music in Apple ads.

Sofi Tukker is made up of Tucker Halpern, who played basketball at Brown University in Providence, Rhode Island, and Sophie Hawley-Weld, who also went to Brown ... but who definitely did not play basketball.

"I was probably as far from the athletic community as you could get," Hawley-Weld says.

"We never even saw each other once until our senior years, when I had already had to stop playing basketball," Halpern says.

A few years before that happened in 2009, Tucker Halpern joined the Brown basketball team. As a freshman, he started 10 games. By his sophomore year, he was his team’s No. 2 scorer and an All-Ivy League honorable mention.

Halpern believed the NBA was a possibility.

"People around me were like, ‘You know what, if you keep progressing’ — and I knew I would work as hard as I possibly could — they were like, ‘You could do this. Like, there's no reason you can't at least have a really good European career,’ " Halpern says.

After that sophomore season, Halpern says he started getting recruiting emails from teams overseas. He was named Brown’s captain for his upcoming junior season.

"And I was, like, coming back to have this really big year, and I was all really excited and focused," he says. "And I guess it was in September, November — I got mono. That was pretty devastating. Because even if it was a normal case of mono, I’d be out for three weeks or a month."

This wasn’t a normal case of mono. Weeks passed, and Halpern wasn’t getting better.

Doctors eventually figured out that he had a strain of the Epstein-Barr virus. That’s why he couldn’t shake the mono.

"There's like an antibody that makes the mono dormant for everyone, but it wasn't activating," Halpern says.

Halpern says he didn’t have the energy to do anything. He decided to leave school so that he could go home to Boston to rest.

"All of a sudden, full stop," Halpern says. "Plucked out of my life, lying in bed in Boston with no energy to even get up and go downstairs for lunch."

Halpern says he spent seven or eight months in bed.

"And I wanted to somehow be productive or learn some skill or do something so I didn't feel like I was literally wasting so much time and everything," he says. "So I got this FL Studio — which is, like, one of the computer softwares that you make music with."

He started watching tutorials on YouTube — and he says he became obsessed with it.

Halpern says making music was a good distraction. It kept him from getting too anxious or depressed about what was going on with his body.

After a year away from school, in the fall of 2012, Tucker Halpern returned to Brown. He started taking music classes. But he was ready to focus on basketball again. A lot had changed. Brown had a new coach. He was no longer captain.

And Halpern noticed his body wasn’t the same. He says he started getting really sore. His joints would hurt.

But in his first game back, he came off the bench and hit five three-pointers. He was in the starting lineup by late December when Brown hosted Providence College from the Big East.

"I was not feeling good, I actually remember," he says. "But I ended up having a really good game. I had [28] points, hit a last-second three.  We ended up upsetting them. And I remember the place was going nuts, because we don't really beat them much. And we went into the locker room afterwards. And everyone was screaming and celebrating. And I remember sitting down at my locker and crying. I was so spent. Like, my body was pushed way over its limit. And I remember sitting there thinking, ‘It's over.’ "

But Halpern finished out the season. In the summer, he kept training. But he says every few weeks, he’d have setbacks where his joints would swell up — where he couldn’t walk.

"The doctor finally said — the third time I went that summer — he’s like, ‘You have to stop playing. You’re just pushing your body. It can’t handle it. We don’t know exactly why it can’t any more, but it can’t,’ " Halpern remembers. "And so I was, like, very shook. Kinda numb. But also kinda knew I couldn’t keep fighting my body. And I stopped at Guitar Center on the way home and bought a little DJ controller. It was weird. I don't know what I was thinking. I just did it."

For the rest of that summer, Halpern focused on music. And the first week he got back to school, he talked to a friend who was throwing a big party.

But Halpern says those 30 minutes were "pretty decent." And after that, he started DJing at more and more parties at Brown — and then around Providence.

“And I would literally get out of bed, drive there and play until 5 in the morning.”

"I had a big speaker in my car and my little DJ setup," Halpern says. "And I would just keep it in the trunk. And people would call me at, like, midnight and be like, ‘Hey, I think we're going to have a party at this house.’ And I would literally get out of bed, drive there and play until 5 in the morning."

And this is where we get back to Sophie Hawley-Weld.

Hawley-Weld started at Brown in 2010. And she says she barely knew the basketball team was there.

Before her senior year — that same summer that Tucker Halpern gave up basketball — Hawley-Weld says she wrote a 10-song EP that was just her and her guitar.

That fall, Hawley-Weld performed her music with two other people at an art gallery. Halpern was scheduled to DJ afterwards.

"And there were probably a handful of people walking around an art gallery," Hawley-Weld says. "It was very underwhelming."

"Like very underwhelming," Hawley-Weld says. "It was the beginning of the evening. But I do remember, Tucker came early to unload his stuff. And I mean, this is the first thing that everyone thinks when they see Tucker, but he's just, like, really tall. And I remember, he was wearing a black leather jacket, and he was wearing all black. Just, like, intimidating. And then Tucker — at the end of one of my songs — he came up, and he was like, ‘I really like that song. Can I try something?’ "

The next day, Hawley-Weld and Halpern met up and started collaborating. Hawley-Weld says she didn't learn about Halpern's basketball career until much later.

"I didn't really tell her much about it," Halpern says. "It's not like it would've impressed her, anyway."
"It's true," Hawley-Weld laughs. "I would've been like, ‘Who? What's that?’ "
The Start Of Sofi Tukker

During their final semester at Brown, Sophie Hawley-Weld and Tucker Halpern worked on more songs together. Hawley-Weld was planning to take a fellowship after graduation to move to Brazil. She was going to teach music and yoga.

Halpern had a different idea. Because in the lead up to graduation, he’d gone to New York to visit a friend from an established band called The Knocks. First, Halpern showed the friend some of the music he’d been working on on his own. The reaction was ...

Then, Halpern says, as a throwaway, he played some of the music he’d worked on with Hawley-Weld.

"And he was like, ‘Oh, this is cool,’ " Halpern remembers. "And it was in Portuguese. And he's like, ‘This is really interesting. You should pursue this. You should start a band with this girl. And go for it.’ "

Meanwhile, back in Providence, Hawley-Weld had just finished her last exam.

"I was celebrating that I had just finished college," she says. "And I get a call from Tucker. And Tucker calls me, and he says, ‘Hey, will you move to New York with me and form a band?’ "

At first, Hawley-Weld says life in New York was scary and stressful. They weren’t making any money.

She says she ended up developing an injury from running too much. It got so bad that she ended up in a wheelchair and had to leave New York. Now, it was Hawley-Weld who was bedridden. For months, she and Halpern connected via Skype every day to make music.

When she was rehabbing, the duo released a song they’d made at Brown called "Drinkee."

It would change their lives.

"We ended up getting a cold email from Apple saying, ‘Hey, we want to use this song in a commercial,’ " Hawley-Weld says.

"We thought it was a joke at first," Halpern says. "We thought a friend was, like, punking us or something. But then it was real."

"And at that point, that was when we were like, ‘Oh thank goodness. We can pay rent for a couple months. Let's do this,’ " Hawley-Weld says.

In December 2016, Sophie Hawley-Weld and Tucker Halpern learned "Drinkee" was nominated for a Grammy. Last April, they released their first studio album, "Treehouse." 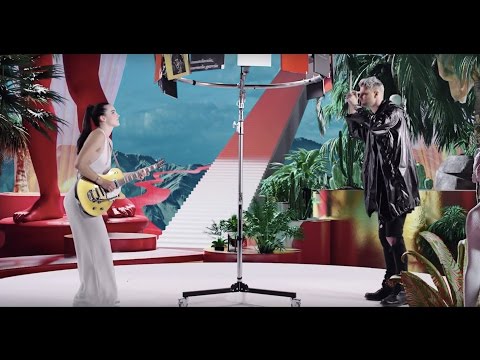 And after playing with dozens of basketball players over his career, Halpern says Hawley-Weld is the best teammate he’s had. I asked him where he thought he'd be without her.

"I don’t know — not here," he says. "I definitely wouldn't be as good of a dude. I think she's made me a way better person. And becoming so aware of certain things that growing up around a team, in locker rooms, in that culture — you don't really learn about. I really think she's rubbed off on me as a human being, probably, in the best way."

These days, Sofi Tukker has a pretty busy tour schedule. During March Madness, the band is scheduled to perform in Russia, Ukraine, Poland, the Czech Republic, Bulgaria and Turkey. But Tucker Halpern says one day he wants to talk to Division I athletes who are just like he was — focused on going pro.

"I want to be able to tell those people — and everyone, but especially those people from my personal experience — that you can switch it up. You can still be great at something else," Halpern says.

We first read about the story behind Sofi Tukker in a New York Times article written by Joe Drape.