For more than three decades, no American woman won the Boston Marathon.

Heading into last year’s race, Des Linden was one of three runners with a good chance to break that drought. She was 34 years old, a two-time Olympian with an impressive running resume. And she had nearly won the race in 2011, coming up two seconds short after a sprint to the finish.

But she almost didn’t make it to the start of the 2018 Boston Marathon because of something that happened 10 months earlier, in July 2017, in a race on the other side of the world.

It was the kind of race day that runners dream about. Beautiful weather. Flat course. Enthusiastic crowds. Perfect conditions for fast times.

That’s why, standing at the start of the 2017 Gold Coast Half Marathon in Australia, Des Linden told herself, "I’m going to knock it out of the park."

But she didn’t. Not even close.

"In the first couple of miles, it was like, ‘I feel so sluggish. I feel so slow, just so lethargic,’ " Linden remembers. "And then the motivation was just like, ‘What's the point? Why do I care so much? Like, really, if I win this half marathon, [will it] change my life?’ I just didn't care."

Mile after mile after mile, as Linden raced along scenic surf beaches, past Runaway Bay and around Paradise Point, the lack of motivation became more intense.

"And by the end I was like, ‘I could be done.’ No passion at all," Linden says. "I feel like it was a thing that I had been putting a Band-Aid on for a long time and it just finally bled out. The Band-Aid's not going to work anymore — like, you need to go get the stitches — this has been a bigger problem for a long time."

'The Band-Aid Is Not Going To Work Anymore'

The Gold Coast Half Marathon came after two years of intense training for big races.

But Linden felt frustrated. She was in the best shape of her life, and she wanted better results.

"By the end of Boston, it was like, ‘OK. I know the fitness is there. We just need to tweak things. Let's go. Let's, like, keep knocking our head against the wall here, and we'll figure it out.’ "

After Boston, Linden took a shorter break than usual from training — just two weeks. Then, she didn’t gradually build back her mileage. She ramped it up right away.

"That probably kicked me in the butt," she says.

And it left her shattered after the Gold Coast Half Marathon.

"I'm not a crier, but I finished, and I was in tears," Linden says. "Because it's hard — you're like, ‘I just I think my body's done. I think mentally I'm done. Like, clearly physically, not responding. I hate how much work I'm putting into this to have a horrible experience and tarnish a thing I really love.’ "

Linden went back to her hotel room and talked to her husband Ryan. She had questions.

"Why am I so tired? How did I get so bad at this? What happened that I got this bad? Like what's going on?" Linden says. "It didn't make a lot of sense."

Why? Because for marathoners accustomed to pushing past the pain and the fatigue and the self-doubt, the hardest thing to do is take time off. To recover — really recover. Especially when running is your job.

But when she was honest with herself, Linden knew running a fall marathon wouldn’t solve anything. She was burned out.

She needed a break from the grind — a break where she ran when she wanted to and didn’t run when she didn’t feel like it.

Some days, Linden went for a run. Some days, she headed out the door, then changed her mind, went back home and did something else. She spent a lot of time on Lake Michigan near her home in Charlevoix. She played with her dogs. She read. She stayed up late, drank good bourbon and ate unhealthy food. She fished. She kayaked.

“My thing is always to go out to Fisherman's Island — usually by myself." Linden says. "And it's quiet, and it's very, very empty out there. Yeah, very peaceful."

"It was just go kayak and not worry about what's back on shore," she says.

Her husband Ryan, agent Josh Cox and older sister Natalie Davila were there to offer support whenever needed. But Linden didn’t make that easy.

Linden remembers an argument with her agent. She wasn’t happy about Cox updating her personal calendar and causing her phone to buzz.

"And I'm like, ‘Don't — just delete all the calendars.’ Like, ‘I don't want anything any more. I got it. I'll figure it out. Don't do anything. Stop trying to help me.’

Then, in September, she started stringing running days together. And it felt good.

She ran 10 days in a row. And it still felt good. Every day, she wanted to be out there on familiar roads in Charlevoix. And it wasn’t long before Linden re-established a training routine.

By late September, she started thinking about putting a race on her calendar.

And she says that was "super daunting. To be like, ‘What if I go out there and it's even worse?’ "

Back On The Course

Linden’s first event back was a cross country race in Boston. She hadn’t run cross country since her college days at Arizona State more than a decade earlier.

"You go somewhere where you can't compare yourself to yourself in the past, anything you've done before," Linden says. "You go somewhere that makes you happy and has good feelings associated with it. That was being in Boston and running the Mayor's Cup cross country."

She didn’t win. She finished fifth. But she discovered something.

" ‘Oh, I still can do this — like, physically,’ " Linden remembers thinking. " ‘There's stuff there, whether it's great or not. I can physically do it, and it's fun. Like, it's actually really fun.’ I love competing and I don't have to worry about the stopwatch or a split or whatever. It was like, ‘Just go and try to beat some people.’ "

During the fall of 2017, she tested herself in other short races. Then, Linden set her sights on the 2018 Boston Marathon.

And she says she was laid back about her training.

As it turned out, April 16, 2018 was the kind of race day that runners dread. Temperatures hovered around the high 30s, headwinds gusted to 35 miles per hour and torrential rains drenched the 26.2 miles from Hopkinton to Boston. And the weather thinned the big crowds that usually line the course.

"It was so bad that it was comical," Linden says. "Like, the rain just dumping on you. You’re soaking wet, like, I don't know, after one minute out there. And we have a few hours ahead of us. We're wearing jackets like, ‘This is going to be a long day.’ "

It had been 33 years since an American woman had won.

And, early on, Linden sensed it wasn’t going to be her day.

Around Mile 6, she told fellow American Shalane Flanagan that she might drop out.  She also said, "If you need something, let me know."

Shortly before the half-marathon mark, Flanagan made her now infamous porta-potty stop. Linden slowed to wait for her.

Around the same time, Linden saw another American runner, Serena Burla, do something even crazier.

Burla had started the race in a singlet and shorts — no jacket.

"She realized she wasn’t going to get to the finish in what she was wearing," Linden said at a recent live event in Boston. "She was going to get hypothermic. Serena sees a trash can and is like, ‘I’m going to get the trash bag, empty it out, punch a hole in it and wear it.’ She wore it the rest of the race. But I’m looking back and Shalane’s running to the bathroom, and there’s this bag, like, billowing. And I’m like, ‘What is happening? This is a circus.’ "

Then, during mile 21, right after Heartbreak Hill, Linden took the lead. From there, Linden pushed to the finish. As she ran through Cleveland Circle and Coolidge Corner and Kenmore Square, she extended her advantage. By the time Linden passed Fenway Park, her closest competitors were minutes behind.

Her stride was easy and confident. Her head up. Her eyes focused on the empty road ahead. Linden turned right on Hereford Street, left onto Boylston Street — and saw the finish. 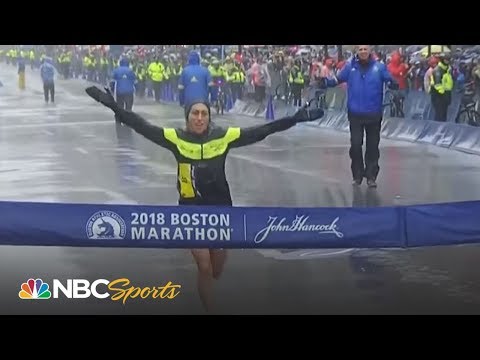 Linden’s husband Ryan and agent Josh Cox rushed to embrace the new Boston Marathon champion. And, for the second time in less than a year, there were finish line tears.

On the race broadcast, amid all the cheers, you can just barely hear them tell Linden, “You deserve this. I’m so proud of you.”

And they were talking about more than the result.

Des Linden will be back in Boston to defend her title on April 15.