On a Wednesday morning last July, reports came out that the Toronto Raptors were trading their All-Star guard DeMar DeRozan.

DeRozan had spent his entire nine-year career with the Raptors. He posted to his Instagram story, “Ain’t no loyalty in this game.”

The news was also a blow to Kyle Lowry, DeRozan’s co-star and close friend on the Raptors. Lowry was later asked about the trade by ESPN’s Rachel Nichols.

"DeMar was very open this summer about feeling betrayed. Did you feel betrayed?" Nichols asked.

If you think this sounds about as dramatic as a scene from "Game of Thrones," well, you're not alone.

The DeMar DeRozan trade was the subject of a recent episode of "Game of Zones,"an animated video series that imagines what would happen if real-life NBA drama unfolded in a medieval, Game of Thrones-inspired universe. 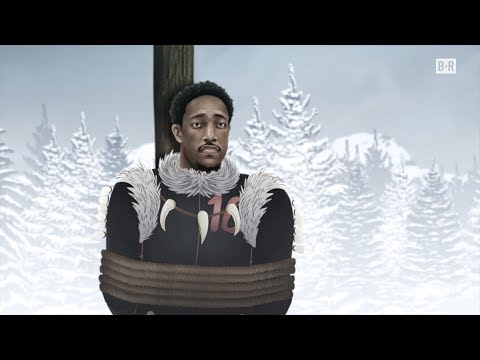 "How could you do this to your most loyal knight?" an animated version of Kyle Lowry asks after he learns of the trade.

It’s definitely a little weird, but "Game of Zones" has been a hit since 2014. The show’s short episodes about off-court NBA drama — like LeBron joining the Lakers or Jimmy Butler reportedly telling his teammates “You bleeping need me” —  get millions of views. NBA players and coaches are among its fans.

And it all started with a pair of brothers — one, Adam Malamut, who worked in reality TV, and another, Craig Malamut, who spent more time studying astrophysics than he studied basketball.

Adam and Craig are from Cherry Hill, New Jersey. It's not particularly medieval.

"The closest thing to a medieval accent is the local people who say things like, ‘Ay, youse all gonna go down to watch the Eagles game? To the Wawa's over there?’ " Adam says. "That's how people talk, so it's sort of medieval. And if you go to an Eagles game, that is fairly medieval.

"I would say, actually though, growing up, the biggest influence, weirdly, of all the medieval stuff was ‘Robin Hood: Men In Tights.’ "

"We would, like, memorize every line from that movie," Craig says. "And it, like, literally, I think, shaped my sense of humor and personality."

Adam is six and a half years older than Craig. (They have a sister, Kate, who’s in the middle.) Adam was always interested in drawing.

"I used to love to draw and create characters," Adam says.

"We’d go on road trips and Adam would be in the backseat — we had like a minivan," Craig says. "And he would put socks on his hand and do a sock puppet show for me and my sister."

"And eventually I noticed that, ‘Hmm, this little Craig guy is also a good artist — but I need to show him how dominant I am at drawing, being six and a half years older,’ " Adam says. "So we started playing this game called 'The Drawing Game.' And the game was we'd have two pieces of paper and —

"Or three," Craig interjects. "Kate would play sometimes, but she'd get bored."

"And then when it's all done, I would show Adam mine, and it would suck," Craig remembers. "And then Adam would show me his, and I'd be like, ‘Oh, my God. That's awesome!’ And then I'd copy what he did."

When Craig was in sixth grade, Adam went off to Emerson College in Boston to study writing, directing and acting.

"When Adam left, I was — it was a huge bummer, cause he was so entertaining," Craig says. "It was like having a — Adam's loving this, he's nodding along — it was like having a comedian in the house that made custom jokes about your whole family dynamics."

When it was Craig’s time to go off to college, he didn’t follow in his brother’s footsteps. He set off on a quest of his own. He studied astrophysics.

"I got involved in a research project about the interstellar medium, which is — it's like the least sexy part of astrophysics — but it's the gas and dust between stars," Craig explains.

But Adam would soon derail his brother’s academic career.

Because while Craig was studying space dust, Adam was trying to make it in LA.

After graduating from Emerson, Adam started working in reality TV. After a while, he landed with "Jimmy Kimmel Live!"

"I thought it was like a dream job to get on a comedy show like that," Adam says. "And I was a TV watcher, which meant that my job was to watch TV and find funny clips. But I found that it was a long process to move into the writers' room from there."

Adam says he was also working long hours and not making much money.

"There was something, like, nagging me to finally put it together and go my own path and teach myself animation," Adam says.

"I just taught myself how to animation and I started making stuff," Adam says.

Three or four years later, he made a video featuring animated versions of Philadelphia Phillies players Chase Utley and Ryan Howard talking on the team bus. Adam did the voices. 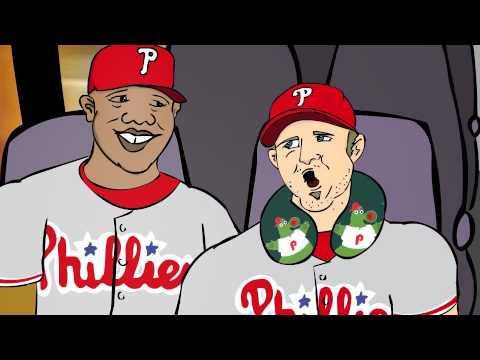 "All they do is sit and talk, because I couldn't really move characters at the time," Adam says. "And a friend of mine saw that cartoon who worked for Yahoo. And he said, ‘Hey, let's make this into a series.’ "

Adam agreed to do six episodes. He soon realized he needed help.

"So he said like, ‘Craig, can you — you know how to draw! Do the background artwork!" Craig remembers.

At the time, Craig was working on his master's degree in astrophysics. But he obeyed his elder brother. He started making backgrounds for the series, which was called "Sports Friends."

Then two things happened: Craig finished his master's. And Yahoo picked up a second season.

The brothers started working out of Adam’s apartment. They were overwhelmed.

"We were up, like, pulling all-nighters to get this stuff done," Adam says. "It was actually a pretty challenging time for Craig and I as brothers. Because we had always had this relationship where I was just the older brother, always entertaining, but now we were in it together — and Craig was sort of paying the price a little bit for me not knowing what I was doing."

But on Sunday nights, the brothers could count on one distraction.

" ‘Game of Thrones’ for us, that was something we really enjoyed doing together," Adam says. "It was like a precious hour that we'd come together. It was sort of like our new ‘Robin Hood: Men In Tights’ — except much more serious with way more beheadings and deaths."

It would also help change their fate.

After they finished the second season of "Sports Friends," Craig and Adam learned Yahoo wasn’t picking up the show again. They started scrambling to find work.

"I was actually looking at jobs at the Griffith Observatory to supplement my money," Craig says. "I was like, ‘I have this degree. I've got to use it.’ "

"It could be pretty scary and frustrating at times," Adam says. "Because we were always like best friends and brothers, and now this pressure of having to make a living here and having to work together as a team professionally was putting that at risk."

And here’s where "Game of Thrones" comes back into the story.

'Could You Make It About The NBA?'

When Craig and Adam were still making "Sports Friends," they’d talked about doing an episode that compared Patriots quarterback Tom Brady to a character from "Game of Thrones."

And the idea of a mashup was still in the back of their minds when they met with Bennett Spector from the website Bleacher Report to talk about making some videos.

So the brothers agreed to make a single video mashing up the NBA and "Game of Thrones." But Craig quickly realized there was a problem.

"I don't even think I knew who Steph Curry was at the time, to be completely honest," Craig says.

Luckily, Adam was a big sports fan. And the brothers began combining NBA players and "Game of Thrones" characters — the dominant Spurs, often maligned for playing a "boring" style of basketball — were compared to undead villains known as the White Walkers. LeBron James, who at the time was winning championships with the Miami Heat, became Jaime Lannister, a knight from a powerful house. 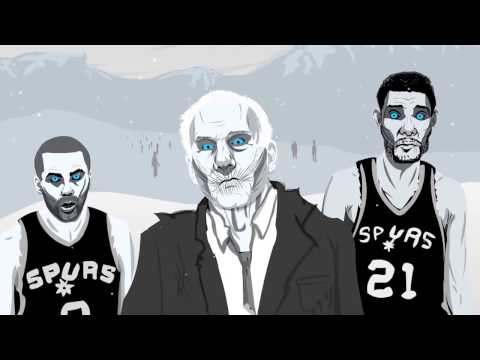 But they managed to put together a second video. It also blew up. Bleacher Report asked the brothers to come on board full time.

In the years since the show debuted, "Game of Zones" has expanded beyond "Game of Thrones." The brothers say the show is now set in its own medieval basketball universe.

And Craig and Adam now have a staff of more than 20 people. They still direct, write, and voice the characters.

Adam says he and Craig have learned to complement each other well. After all those years of proving his dominance in "The Drawing Game, Adam has allowed his younger broth to become the de facto team executive.

They say their mom keeps close tabs on the show.

Whenever a new episode comes out, "she's at what she calls her battle station," Adam says. "And she's, like, searching Twitter and she — "

"She even once had a burner account where she would comment positively on our videos," Craig says. "But we put that to bed. We ended that very quickly."

"Yeah, we were like, ‘Please do not go down this road,’ " Adam laughs.

Adam and Craig Malamut don’t need the help — that recent episode about the DeMar DeRozan trade already has about 2 million views on YouTube.

Adam and Craig Malamut are now also executive producers for another animated show from Bleacher Report called "The Champions." (Think: pro soccer drama crossed with a reality TV show.) You can find episodes of that and "Game of Zones" on YouTube or on the Bleacher Report app.