On Sept. 7, Texas A&M will be in South Carolina to play the Clemson Tigers, college football’s reigning national champion.

Last year’s game between these two college football powerhouses took place in College Station, the home of the Texas A&M Aggies. Clemson fans made a big impression there, with the help of a very unusual currency.

Adam Drake is an easy-going guy. In fact, you can call him almost anything you like.

"The Chicken" is the Dixie Chicken restaurant, a hot spot before and after Texas A&M home games.

"And I will say that Aggie fans are the nicest, best fan base in the entire world," The Drake says.

He works for Dixie Chicken, so you’d expect him to say that. But lots of rival fan groups also visit the restaurant when their teams are in town.

"I've been there for games with the University of Texas," Drake says. "The Baylor Bears have come in. Tennessee and Alabama and Auburn, all these great SEC schools. But, honestly, the best that has been there? It has been Clemson."

What sets fans of the Clemson Tigers apart? It all began with a man named George Bennett.

"We've just had a lot of fun with it down through the years," says Bennett, Clemson Class of 1955.

He returned to his alma mater in 1967 to work in fundraising and development. At that time, Clemson’s biggest annual game was against Georgia Tech, which had been played in Atlanta almost every year since 1903.

"And that was kind of what we called our 'big money game,' so to speak. We were getting a pretty hefty paycheck," Bennett says.

Clemson is a national power now, but back in the ‘70s, the Tigers were a team top programs like Georgia Tech would pay to come to town … and usually lose.

But Clemson rooters loved the Georgia Tech game. Bennett estimates that, each year, 15,000 to 17,000 Clemson fans would make the 100 mile trip to Atlanta. They’d spend lots of money in the city’s restaurants, hotels and stores.

But, in early 1977, Georgia Tech contacted Clemson to say …

"So that's when I came up with the idea: let's everybody take $2 bills down to Atlanta."

Bennett was angry that Clemson was being snubbed in favor of a mediocre football program from a non-major conference. As for the Atlanta business community …

"As the manager of the Hyatt Hotel said, 'Well, I really hope that William will bring Mary. Because that’ll be the biggest crowd they bring down here,' " Bennett says with a chuckle.

But before the contract expired, Clemson and Georgia Tech were scheduled to play one more game on Sept. 24, 1977. George Bennett started thinking about a way to make Clemson’s traditional rival regret its decision.

"So that's when I came up with the idea: let's everybody take $2 bills down to Atlanta," Bennett says.

Bennett wanted people to realize the economic impact the Clemson community made when it traveled.

"Nobody was using the $2 bill at all," Bennett says. "That was the whole deal, was to do something that was unusual. Ten twos would make a bigger impact than a $20 bill would."

So Bennett rallied Tigers fans. On Sept. 24, they arrived by the thousands in Atlanta for the big Georgia Tech game. In Bennett’s words, they covered the city in $2 bills.

"Cab drivers, the hotel clerks, the bellhops, waitresses and waiters in restaurants — we would tell people, 'This is a Clemson $2 bill,' " Bennett says. "We had such a big time with it that the Atlanta [Journal-Constitution] wrote a big story about it. And so that was the start of it."

It was too late to put Georgia Tech games back on the schedule. But Bennett thought it would be a good idea to keep bringing $2 bills to away games. And then …

"We decided to mark the $2 bills with tiger paws on it," Bennett says.

Bennett bought an ink pad — Clemson orange, of course — and a custom logo stamp. (Clemson’s logo was based on an actual paw print of a Bengal tiger.) And he got to work stamping bills. He encouraged others to do the same. 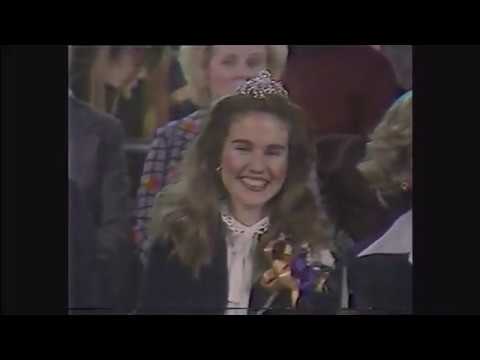 On Dec. 30, 1977, Bennett and his fellow Clemsonians distributed the $2 bills at the Gator Bowl as Clemson played Pittsburgh. Bennett says Bowl committee members began asking for them. It became a college football sensation.

His friends — and he has a lot of them all around the country — call him “The Hat.”

"I'm dressed in orange and purple," he says. "And that big orange cowboy hat is always there.

"When I've got on that orange blazer, my pocket — where a handkerchief usually goes — there’s $2 bills. Now, a lot of people say, 'Man, you better take those out. You're going to get mugged.' But I haven't been mugged yet."

The Hat stamps his own $2 bills. He’s been developing his technique for four decades.

"I'll do one on the left bottom corner, I’ll do one. And then the right top corner I'll do one. Well, then it looks like a tiger steppin’."

For the last 10 years, under head coach Dabo Swinney,  the Tigers have been a powerhouse. And, with the team in bigger bowl games, there have been more opportunities for Clemson fans to distribute their orange and green cabbage.

The Hat’s correctly-stamped $2 bills were out in full force at the 2014 Citrus Bowl, where Clemson took on Oklahoma.

"And we were on the first row of the upper deck," The Hat says. "I told Oklahoma people, I said, 'Every time we score, I’m gonna throw $2 bills overboard to the people in the lower deck.' "

Early on, the game was a blowout.

"And the Oklahoma people wanted to throw $2 bills," The Hat says. "So they came over. They said 'Wait, y'all are fixing to score. Can I have a couple to throw?' And finally, my wife, she give me that look. And she said, 'You do realize $2 bills are real money.'

But The Hat says it was worth it.

"Hey, I've got friends in Oklahoma that, had I not have [done] that, we would've never met."

Once, in Columbia, South Carolina, The Hat tried to buy something at the home stadium of the arch rival University of South Carolina Gamecocks.

I ask him how he responded.

But almost everywhere else, the Clemson $2 bill is coveted. George Bennett saw that firsthand before the Orange Bowl a few years ago, when he and his wife checked into a Miami hotel.

"And, all of sudden, this guy comes walking up, and he's speaking a foreign language that I didn't know," Bennett says. "I asked the clerks behind the desk, 'What does he want?' They said, 'He wants one of your $2 bills.' So I just … I gave him a $2 bill. Well, he turned around and gave me 100 hundred euro[s]."

Bennett says his wife later exchanged that 100 euro note for $129.

Bill Harley is Senior Vice President at First Citizens Bank in Clemson, South Carolina, which provides orange ink pads and tiger paw stamps right alongside the withdrawal and deposit slips so customers can stamp their $2 bills right on the premises.

But the demand for the bank’s crisp $2 bills often exceeds the supply. That led to a problem right before the 2017 College Football National Title game between Clemson and Alabama.

"These people got really upset at us that we'd only give them $50 worth of $2 bills, so they stole our stamps," Harley says.

No one at the bank really seemed to mind. Clemson beat Alabama 35-31 for the 2017 national title.

Two years later, Clemson again played for the national title. The Hat was there with his wife. He brought 400 $2 bills.

The Tigers took back the national title, blowing out Alabama 44-16.

The Hat received congratulatory messages from friends he had met in rival college towns across the country, including from Adam Drake at the Dixie Chicken.

Steppin' Into The Future

Georgia Tech played just one game against William & Mary. That was in 1979. The Clemson/Georgia Tech rivalry resumed in 1983, but that probably had more to do with the fact that Georgia Tech had joined the ACC, the conference Clemson was in.

So George Bennett’s idea for the Clemson $2 bill may not have saved the Georgia Tech game, but it did establish a tradition.

"I had no earthly idea that this would be going on as long as it [has]," Bennett says. "The younger generation, they’re really carrying it now.