There’s a video of last December’s California International Marathon. In it, the clock above the finish line is counting up to 2 hours and 45 minutes. That’s the “qualifying standard” for the Olympic marathon trials.

The California International Marathon is a fast race – specifically marketed to runners who hope to qualify for the Olympic Trials. And on this day, 99 women had crossed the line within the qualifying time when Hayley Sutter collapsed just feet from the finish. 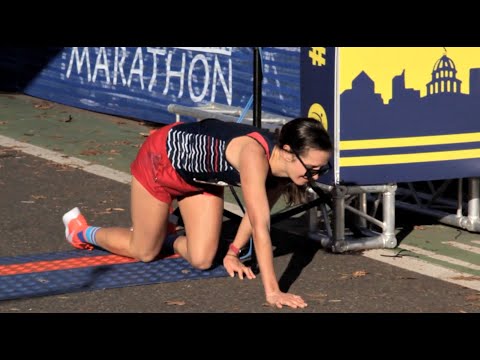 Those who knew Hayley probably weren't surprised to see that she didn't give up.

Some people spend their whole lives figuring out what they want to be. Hayley Sutter figured it out when she was 12.

"I know the specific date that I became a runner," Hayley says.

It was Sept. 14, just a few weeks after Hayley started seventh grade.

Hayley was helping her volleyball team set up for the next day’s match. And when the coach left the gym for a few minutes, Hayley and her teammates got the idea, as seventh graders sometimes do, to ride around on the dollies meant to carry chairs.

"I had a friend in the front, and I was in the back," Hayley recalls. "And my friend in the front of this dolly was kind of kicking to make us go faster. And I saw her doing that and without even thinking I was like, 'Oh, I should do that, too.'

"So I put my foot down to give us a kick. And the dolly just severed through — through my ankle. So it's a very disgusting story if you really imagine the details. So please don't."

Hayley had severed her Achilles tendon.

The next day, Hayley sat between her parents while the operating surgeon explained that she would most likely walk with a limp for the rest of her life.

" 'She's never gonna run, she's never gonna play sports,' " Hayley remembers the doctor saying. "And I remember sitting there — and I'm so lucky that I was a defiant 12-year-old — and I said, 'Well, I'm gonna show you.' "

By the time she was in high school, Hayley wasn't just a runner. She had set her sights on her school’s record for the mile.

"And I never even came within 30 seconds of it," Hayley says. "I always wanted to push myself and set really big, you know, perhaps unattainable but exciting and scary goals."

But the first time Hayley ever ran a marathon, she didn’t set a big, scary goal. She just wanted to see if she could do it.

And on a hot, humid day, she finished the Houston marathon in 2:52:37 – just seven minutes and 37 seconds slower than the time needed to qualify for the Olympic trials.

"Afterward, everyone was like, 'Oh, my gosh, if the weather would have been great, like, I wonder what time you could have ran.' And, you know, kind of getting it in my ear that I was only seven minutes off, like, in my first ever marathon, which is still a lot — seven minutes in a marathon is a lot of time. But running that first one and having a good level of success made me think, 'I think I could potentially go after this.’ "

Hayley's first official attempt to qualify for the Olympic trials was a race called the Grandma's Marathon.

"Grandma's Marathon is in Duluth, Minnesota," Hayley says. "The course is just generally really favorable. It's a place where a lot of people attempt to break the OTQ."

OTQ — the Olympic Trials Qualifying Standard. It’s just one of many running terms you might want to look up before having a conversation with Hayley Sutter.

But back to the story…

The morning of Grandma's Marathon, Hayley was nervous.

"So nervous," Hayley says. "Usually, I am pretty calm and confident in myself. But I was thinking about all those things that I didn't do or I should have done. Like I didn't lift enough, I didn't swim, I didn't do abs. You know, I should have been stretching more and rolling out my muscles. Little things, auxiliary things, that are oftentimes necessary to kind of get to the next level."

"Yeah, and I had," Hayley says. "I had. And I was just kind of digging myself into this pit of despair and just being irrational in some ways."

Hayley was still nervous as she lined up at the starting line.

"I found a group of girls who were also trying to run the qualifying standard, so just kind of like grouped up with them," Hayley says. "And, you know, essentially just waited for the gun to go off."

Hayley doesn’t usually run in a group. She’s more comfortable setting her own pace. But at Grandma’s, because she had set such a big, scary goal, she thought a pace group might help.

But the group went out too fast for Hayley. By Mile 10, the rest of the group had pulled ahead. By Mile 20, Hayley realized that she wasn’t going to be able to catch up.

"And so you have these people who, you know, they're either keeping pace or picking it up a little bit," Hayley says. "And I'm, like, slowly slowing down. So just like these — like stars in the galaxy, like if you've seen Star Wars and the stars are like flying past. That's exactly what it felt like."

Hayley crossed the line at 2:52:56, nearly eight minutes off her goal. But she didn’t dwell on her disappointment for long.

"You know, once I decided, 'OK, you know what, I'm not out of the game. I still have this,' then CIM was pretty much the only marathon at that point that I wanted to do," Hayley says.

This time, Hayley banished all those irrational thoughts.

"So I was really relaxed, and I was really confident in telling people, too, like '2:45 or bust,' " Hayley says.

"Running that first one ... made me think, 'I think I could potentially go after this.’ "

By Mile 2, Hayley felt so good that she found her mantra. She says they often come to her in the early parts of a race. She started repeating to herself, over and over, “You’re gonna do it. You just have to get there.”

"Which then became kind of ironic in the last couple miles, when I was telling myself this," Hayley remembers.

Hayley says she had little flashes of doubt along the way. She knew that was normal. And she just kept telling herself, "You’re gonna do it. You just have to get there."

"From 20 to 23 is when it just started to kind of progressively get a little bit harder," Hayley says. "And, then, at Mile 23 is when I really remember thinking like, 'Oh, no. Like, this is getting really bad.' "

With just two-tenths of a mile to go, Hayley remembers seeing a man dressed in a Jesus costume holding a sign that said, “The end is near.”

"And I remember like looking at him and you're — I'm so delirious at this point too, just thinking like, 'Oh my gosh, this could be my end,' " Hayley says.

The Fall At The Finish

The finish line was just a block past the final turn.

"So I round the curve, and you can see the clock," Hayley says. "They have the big finishing banner, and they have the clock there. And the announcer said, '30 seconds to go. Let's see how many of these women can make it.' So women are starting to sprint beside me, and I'm just watching the seconds tick by.

"And I could feel my legs getting wobbly. And if you look at the video, I'm trying to run as fast and straight as I can, but I'm starting to swerve. Someone on the sideline actually got these really kind of devastating but beautiful pictures of me as I'm falling, and you can see, like, I turn my head up and start to scream, and then I fall right there."

I turn my head up and start to scream, and then I fall right there.

Hayley doesn’t remember much of this next part. She knows she crawled maybe five or 10 feet across the finish line. And she knows what was running through her mind as she did it.

By the time Hayley crawled across the finish, the clock read 2:45:07 – seven seconds over the Olympic Trails Qualifying Standard.

Volunteers picked Hayley up off the ground and walked with her until she came back to her senses.

The clock above the finish line displayed the time since the starting gun was fired. That’s gun time. But it was a big field. Hayley knew it had taken her a few seconds to cross the starting line after the gun went off. The chip in her bib would have recorded how long it actually took her to get from the start line to the finish line — and that’s chip time.

The volunteer didn’t know which time was used for the OTQ, so Hayley still didn’t know if she’d qualified. So she left the course — went to brunch with her dad and her boyfriend. That’s when she got a text from her roommate that said:

But Hayley hadn’t done it. A little later she got a call from her coach. The qualifying standard went by gun time, not chip time.

"You know, it honestly still was fine because I was really proud of myself," Hayley says. "I had ran a huge PR. I knew that I pushed myself as far and as hard as I could. And so, you know, didn't even think to be devastated that I didn't do it."

And then Hayley got another call from a more experienced runner who knew how to petition USA Track and Field to accept chip time instead of gun time.

"And so I'm sitting at brunch, like, fielding all these phone calls," Hayley remembers. "My phone is dying, so at one point I was actually in the bathroom charging my phone."

A few months later, USA Track and Field accepted Hayley’s appeal, qualifying her for the Olympic Trials Marathon in Atlanta on Feb. 29, 2020.

And that video of her “fall and crawl” at the finish line? It’s been watched over and over, by thousands of people.

But as you’ve probably guessed by now, Hayley’s not the kind of person to let that bother her.

"You know, there are two options, there's two avenues you can take," Hayley says. "You can find it hilarious, or you can find it devastating. My dad doesn't like to watch it. He finds it really sad. I think it's funny. But I also kind of see it as an empowering moment too that — so I didn't run across the finish line. I crawled. Throughout my life, I'll look back on that moment and take it as a metaphor that when things aren't going my way, and I'm not achieving what I want to that, you know, maybe I just needed to change tactics."

At last count, 335 women have qualified for the 2020 US Olympic Trials Marathon. The fastest has a time of just under 2:21. Hayley Sutter is all the way down at the bottom of the list, tied for last place with 2:45.

But, as always, she’s set a big, scary goal for herself. She wants to finish in the top 50.

"That's a huge goal, and I might not get there," Hayley says. "But as long as I don't finish dead last, I've done better than expected."