If you go to any major sports event, look towards the press gaggle. Look for a kid in a navy suit with a yellow-tipped toy mic, and the dad clearing a direct path to his son’s next interview subject. Here’s kid reporter Vedant Gupta making his way.

If you haven’t been hearing about him, don’t worry. You will be.

At least that’s his plan. He isn’t just some sweet-faced, sweet-talking 12-year-old kid. He is a brand. He is the president of his two-person company: Global Kid Media.

Vedant knows that every good businessman has a good elevator pitch, a quick introduction that lasts as long as an elevator ride. This is Vedant’s:

"My name is Vedant Gupta, and I'm the president of my own media company, Global Kid Media," he says. "For the past 18 months, I've been covering NFL, NBA, college, talking to the biggest names, and I'm trying to break through as first kid on national TV to inspire all the other kids that they can do anything at any age."

Vedant wants to be the first reporter his age. But you may have noticed. His voice has dropped. He’s getting older, and he’s only got 736 followers on Instagram.

So far, Vedant has struck it big once or twice: getting honored at small town meetings, landing appearances on local TV.

For the past two years, Vedant has been trying to grow his brand, using Instagram, YouTube and even LinkedIn to share quick video interviews with sports celebrities. Interview anyone he can, from football moms to eavesdropping bartenders to college-level players. Hit them in on the sidelines and find a way to make it into the press conferences. 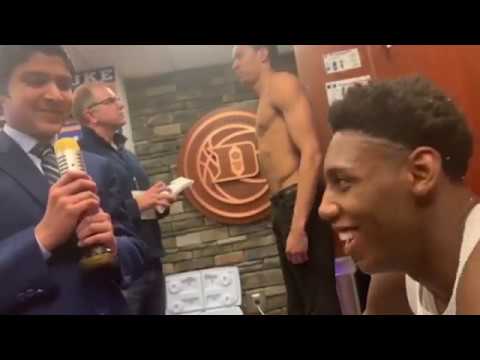 One day, he could lead a movement, his dad says. But before all that, it's just Vedant and his dad. Watching sports at home in suburban Michigan, studying up on sports’ biggest stars.

When Vedant and I spoke a few months ago, it was two days before his 13th birthday. I asked him how he felt about going from age 12 to 13.

"You know, for me, a year and a half ago, I was really nowhere with media," Vedant says. "So in just that short period of time, I've been able to go from nowhere to having my own company and talking to guys like Zion Williamson, Patrick Mahomes, Magic Johnson, Deion Sanders, and we think nearly a thousand interviews now.

"So I think going to 13 — yeah, I'm starting to get a little bit older. And I can't say I'm not a teenager anymore. But, you know, going into 13, I just — this is, I feel like — for me, this is gonna be the year where I really want to break through."

"I think this is the year. Yeah," he answers.

Vedant believes becoming a teen isn’t going to stop him.

His dad, Vipul, sees it a bit differently. He’s worked in the field of marketing, and he knows how this “thing” works. He knows that adorableness doesn’t last forever.

"He was really cute when he first covered the NCAA Tournament in March of 2018," Vipul says. "That was kind of his first foray into everything."

"Life is connections," Vipul writes to me in an email. "He is at that point where doors will stay closed — or finally, they will open."

Vipul didn’t always want to work in sports. His parents were from India. He was born in America. He got his MBA and wanted to be a broker between Hollywood and Bollywood.

America needed Bollywood, he thought. If Chinese martial art films had gone mainstream, so could movie stars like Karisma Kapoor, Shah Rukh Khan, and Juhi Chawla — all people who were megastars in India’s massive film industry.

So when they visited his home state of Michigan on tour, Vipul would wait.

Sometimes, people would just brush him off. To them, Vipul was just another scrappy random. Meanwhile, Vipul was zeroed in completely.

"Just doing what I needed to do," Vipul says. "So, yeah, pretty much I just wasn't making anything — just like right now. But that's OK. We just strive hard and hope that success will come when it comes."

In 2006, Vedant was born. So Vipul started using what he’d learned from his failed Bollywood experiment and encouraged his son to do things that, technically, he wasn’t supposed to do.

First, Vedant, as a third grader, entered in a speech tournament meant for middle schoolers. And it was there he learned he could communicate uncommonly well.

"I got 2nd place," Vedant recalls.

Then, years later, as an 11-year-old, Vedant applied for a national program for kids to develop as reporters. Instead of waiting to get accepted, his dad encouraged him to start contacting media departments anyway, using the organization’s name.

He started calling universities and asking for press credentials.

"So I'd made probably 50 phone calls to schools asking if I could get in," Vedant says.

But the organization got mad at Vedant, telling him he misused its name.

"Even though every time, I was saying that I'm applying for this organization," Vedant says. "But, anyway, that’s when we thought, 'Let's do it on our own.' "

So began the Global Kid Media company, of which Vedant didn’t have to just be an applicant or trainee. He could be president.

Truth was, when Vedant wasn’t in school, he was on the job all the time.

For a Duke-Miami game in March, Vipul pulled him out of class. Then they drove 11 hours to get from Flint, Mich. to North Carolina.

"It was probably about 1 a.m. when we got there," Vipul says. "And then I said to him that, 'Well, the actual campus and where Cameron Indoor Stadium is is about 10 minutes away. Let's go see it.' And of course he was tired, and it was late in the morning.

"He was a little bit reluctant. But I said, 'Hey, this is part of what it is to scout something, to know something, to research something.' So we spent about an hour there looking around the place and just getting the lay of the land. And then we went to the hotel."

People weren’t shy about telling Vipul to his face that he was being too much of a helicopter parent. He says he’s not. What he is, he says, is a fighter jet pilot: doesn’t hover around as much and is strict — but adventurous.

The father-son duo is used to late nights, paired with early mornings. They would also stay up to scout hotels, trying to catch celebrities in more casual moments.

I asked Vedant to tell me about one of those trips. His dad cued him: “Minneapolis."

"So we were in Minneapolis, covering the Final Four," Vedant says. "And we didn't have game credentials. So the next couple of nights, we spent until maybe 3 or 4 a.m. going hotel to hotel, trying to catch coaches and players."

"We had a hotel clerk giving us the eye, too," Vipul recalls. "She was like, 'Ugh, what are you guys doing here?' "

Once, Vedant was at a sports facility, trying to talk to a player who was running a youth camp.

"How do you sort of feel about putting Vedant in these situations?" I ask. "How does it feel to you?"

"It feels like you want to go crawl under a rock and just — you feel worthless," Vipul says. "Initially, it's kind of like a feeling of just feeling so low. But, at the end of the day, I mean when you reflect upon it, I think it makes you stronger. And it makes you appreciate what other people go through. And so I’m very happy he’s also getting those experiences, in a sense. And I know that sounds strange."

Vipul pushes his son, because he knows what it’s like to regret. It was something he never wanted his son to feel.

Back when Vipul was working Bollywood, people would say things to him like, "Come out to Los Angeles next week, and we’ll talk."

He never went. He worried that, upon arrival, there would be no promises. No guarantee of any meeting, no reimbursement for the ticket or a place to stay. He never asked. That was his one regret.

Otherwise, he says he gave it his all. And it seemed like when you gave something your most aggressive try and were willing to do things no one else would, it should be rewarded. Eventually, Vipul couldn’t shake the feeling that he just wasn’t smart enough to pull it all off.

It was like he was being put in his place.

Each drive hours a way to chauffeur his son to yet another game is a promise to himself that his son will have it all: the persistence, the risk-taking, the belief in himself.

And his son won’t be questioning himself, because that doesn’t work.

Vedant doesn’t have doubts about his fate. It’s not a thing a 13-year-old thinks about. Not yet.

Because Vedant — he loves his hobby. He really does.

"For me, even if this was a complete failure, if I inspired even a hundred kids or something like that, then, knowing that, I’m going to keep going," Vedant says. "And, if it fails, I’ll start something else."

And Vedant has gotten to meet some of the celebrities he’s watched on TV who’ve said things like:

So you’re 12-years old. What made you decide to be a brilliant sportscaster?

That was a really good question. You’re the president of your own media company? Look out Elon Musk, man.

When I tell Vedant he sounds just like his dad, he says, "Thanks!" Not in a tone that older people use when they’re secretly spinning into existential dread, but like, "Thanks, my dad is great." It’s genuine.

Vedant, though — he’s getting older. Being a teen is not the same as being a kid. Things that were cool to you once are cool no more. And while Vedant gets older, he and his dad fight.

"Maybe the longest it’s ever lasted is five minutes," Vedant says. "So I know within five minutes we’ll probably be outside playing basketball or something like that. Even when we play sports and things, it gets pretty heated up, but..."

"Yeah, the poor kid can't quite keep up with me, but he tries," Vipul says. "You know, I feel for him. So he’s giving his best shot, right? I mean, unfortunately, he's learned one bad quality that he likes to call a lot of fouls when they're not there. Isn't that true Vedant? You can vouch for that on air here. He's kind of quiet.

"I never see myself as really a dad-type, other than sometimes you've got to give guidance. I think it's more like — I mean, I view him as a best friend and a brother and somebody that I just enjoy hanging out with."

"Did you know that about your dad, Vedant?" I ask. "That he sees you as his best friend?"

"Vedant, is your dad your best friend?" I ask.

"I mean, he's my friend. But my best friends are the ones who've stuck with me since kindergarten," Vedant answers.

"He still doesn’t like me being so rough on him sometimes, so I'm not quite at that 'best' category yet," Vipul says. "I'm a friend, but maybe not his best friend, huh? Is that what it is?"

Maybe Vipul isn’t his son’s best friend. But he is there, trying to make sure his son isn’t alone. And he’ll be holding the camera for Vedant’s next interview, ready for his son to shine.