The Nationals began playing in Washington D.C. in 2005. It wasn't until 2012 that the team posted a winning record.

But even while the team was struggling, there was a bright spot during every home game: the fourth inning Presidents Race.

"The presidents are these big-headed mascots — the four presidents from Mount Rushmore," explains Ryan Swanson, an associate professor of history at the University of New Mexico.

"Can you describe some of the things the Nationals have done to keep Teddy from winning? Because they've gone to some pretty extreme lengths, right?" I ask.

"Oh, yeah. I mean, all kinds of crazy things," Swanson says. "Early in the season one year, the Easter Bunny jumped out of the stands and tackled Roosevelt. They've had Roosevelt sabotage himself in all number of ways: tripping, running the wrong direction, getting cut off. You know, Washington and Lincoln and Jefferson have all taken their turns kind of knocking 'TR' over. And so in Washington, D.C., this became a thing." 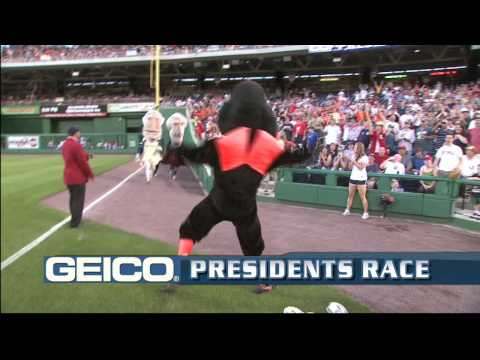 And, for a historian like Ryan Swanson, this “thing” — it had some real poetry to it.

Because, as it turns out, if you had to pick a president to fall on his face in a baseball stadium in D.C. again and again and again, Teddy Roosevelt was the perfect choice.

"I looked at it as a really nice piece of kind of historical karma, and I thought perhaps they were making kind of a nod to history," Swanson says. "But I never heard any, you know, kind of support for the idea that they were really interested in getting their history right."

"I think so," Swanson says.

It all started at the turn of the 20th century, during Roosevelt’s first term as president.

"1901, 1902 — it's noted that he's gone to several college football games, and he's invited boxing and wrestling champions to the White House," Swanson says.

Roosevelt even had a tennis court installed on the White House lawn.

"It's actually where the Oval Office is today," Swanson says. "We're talking — Roosevelt's desk is a mere five, six, seven feet away from this tennis court, just on the other side of the wall."

Roosevelt, more than any other president before or since, was obsessed with sports. But even though the Washington Senators played less than two miles away, Roosevelt had never made the trip.

"By the time 1903, 1904 roll around, baseball's had its first World Series," Swanson says. "You start to see kind of some questions raised in the press about when the president is going to go to a game."

Baseball-friendly journalists started writing articles specifically aimed at convincing the president that he should go.

"The Supreme Court justices go and senators go and congressmen go. What about you, Mr. President?" Swanson recalls.

When that didn’t work, they started comparing baseball to Roosevelt’s Square Deal.

"You know, 'What's more fair than a batter facing a pitcher?' " Swanson says. "You know, 'It doesn't matter your circumstances in life. It's a real fair transaction.' And this continues, you know, 1901, '02, '03, '04. But then Roosevelt wins reelection. And baseball really kind of ups the ante at that point."

It was 1905. Ban Johnson was the president of the American League.

"He gets a meeting with President Roosevelt," Swanson say. "And this is not that unusual. Roosevelt was, you know, pretty open door, especially compared to the White House today. He was interested in hearing from leaders of different sorts. And so Ban Johnson comes to the White House. He has a meeting with Roosevelt. And he explains to the president why the national pastime is something that the president should be a part of."

And this is where baseball gets the first hint that the president’s absence from baseball games might not have been an accident.

"Roosevelt does mention that baseball's always been a struggle for him personally. And he mentions he was not good at baseball as a kid," Swanson says. "And, really, what this boils down to, I think, is Roosevelt has really poor eyesight. He gets glasses in his early teen years, and that certainly helps. But Roosevelt can't see very well. And of all sports — I mean, visual acuity is key to baseball, right?"

"Ban Johnson presents President Roosevelt with a golden ticket," Swanson says. "You know, it kind of sounds like Willy Wonka, right? I mean, it's very intricate. It's got golden lace kind of embossed — very fancy, very ornate, very serious. You know, baseball's very serious about itself through much of its history. So they give it to Roosevelt. And basically, what Ban Johnson says is that this ticket allows him entry into the Senators' ballpark or any other American League ballpark. 'Come anytime you want. Bring any number of friends. You know, bring the congressmen or senators,' or something like that.

"And so Roosevelt accepts this golden-laced ticket from Ban Johnson and, you know, very graciously, 'Thank you. I'm glad to have this.' And Johnson leaves this meeting with the president really hopeful. The Washington Senators at the time feel so positive about the idea of Roosevelt coming to see some games, they actually build a presidential box."

It was above the grand stand, next to the press box.

Years later, Roosevelt’s daughter Alice would give history another clue to the president’s disdain for America’s game.

She said, " 'Father and all of us didn't like baseball, because we thought it was a mollycoddle game,' " Swanson recounts.

"And 'mollycoddle' is not a word I use very much. You know, so translating roughly: 'It's a sissy game. It doesn't fit Roosevelt's definition for what a sport should be.' "

What should a sport be? Well, according to Roosevelt, it should be more like college football — strategic and violent.

"There's no way around it," Swanson says. "Roosevelt thinks that football's ability to cause strain and stress and physical injury actually contributes to its positive effect on American men."

"So baseball could have given up at this point, right?" Swanson says. "I mean, baseball's doing just fine on its own. The World Series has been organized in 1903. Popularity — you know, during Roosevelt's time in the White House from 1901 until 1909, the attendance at Major League Baseball games doubles.

"So baseball might have just kind of said, 'You know what? Let's hold back. We'll wait for the next president.' Taft actually would be very baseball-friendly. But they didn't. They doubled down."

As the 1907 season approached, Roosevelt received a visit from a delegation from the National Association of Professional Baseball Leagues, the NAPBBL. Today, we’d just call them the minor leagues.

"This is hundreds of teams, hundreds of cities," Swanson says. "And they come to Roosevelt, and they just give him the full court press, you know — well, to use a basketball metaphor, mixing sports here. And they tell him baseball is America's national game. It's got all the qualities of democracy and freedom and liberty that you should love. And they turn over to Roosevelt another golden ticket. This one's pretty close to solid gold."

This solid gold ticket was the same size and shape as a normal baseball ticket, but fitted with hinges, so that it could be folded in half and carried in a vest pocket. (How convenient!)

"And this ticket allows Roosevelt entry into any baseball game at any park at any time into the future. So, basically, come whenever," Swanson says. "So, they're trying so hard here. They've obviously spent money and time. They've gotten a craftsman involved. This is the best ticket, perhaps, that's ever been given to anyone in the history of tickets. Which you'd think would work, right? It would work for me. I would go to a game if somebody gave me a golden ticket."

Except that maybe this wasn’t exactly the best way to woo Teddy Roosevelt. Because spending all this money to create a handcrafted solid gold ticket only further pointed out Roosevelt’s most steadfast problem with baseball: There was too much money in the game.

"Baseball is, in some ways, the most overtly professional sport at this time," Swanson says. "And Roosevelt sees that open professionalization as really tainting the activity. He ascribes to the idea that sports should be done purely for character development and fun and recreation. And of course, he can, right? He's a rich guy. He's been rich his whole life. And so sports for nonprofit ... kind of fits with his way of looking at the world."

So, when the delegation from the NAPBBL presented Roosevelt with a handcrafted solid gold ticket, he responded as you might expect him to.

"He thanks this delegation of baseball leaders profusely, sends them on their way and then never uses the ticket," Swanson says.

'Forgiven By The Baseball Gods'

"But no. He kind of digs in his heels, and he refuses to go to a game. It really carries through the entire time he's president."

So it was more than a little ironic when, just over 100 years after Teddy Roosevelt refused to watch a Senators game, Nationals fans rallied behind Roosevelt — the big-headed mascot version — to win a race around the warning track.

"Finally, they did let him win," Swanson says.

"And then, after that, he's gone on several kind of mini-losing streaks, until this past season, 2019," Swanson continues. "He actually won the season series. He won the most races. And, you know, I kind of joked that —  if the Nats aren't careful, if they don't kind of keep, you know, their history in order — it might come back to bite them.

"But, of course, the exact opposite happened. The Nationals won the World Series. So, kind of reminded me as a historian, I've got to stay in my lane. You know, apparently, Teddy has been forgiven by the baseball gods."

Ryan Swanson’s new book is called, “The Strenuous Life: Theodore Roosevelt and the Making of the American Athlete.”