On the night of Feb. 17, 2012, Anthony Federico was working his job at the ESPN headquarters in Bristol, Connecticut. Federico was an editor for ESPN’s mobile website.

"A headline that I had used myself many times before, and that sports media sites had been using for years," he says. "And, about a half hour later, I realized that it had been going viral for the wrong reason.

"I threw up several times because I was aghast and horrified at what was going down."

"When I realized how the social media world was taking that headline, I got up from my desk, and I went to the bathroom. And I threw up several times, because I was aghast and horrified at what was going down."

The headline was quickly changed. Federico spoke to his boss, who tried to console him. But when Federico left the office, he says he was still distraught. He drove to his parents’ house.

That became clear a few hours later when Federico got a call from his boss.

Climbing The Ranks At ESPN

"I grew up in a big Italian-American family," he says. "I'm the oldest of five kids, and the best looking, and the smartest and the most athletic of the five kids. No, I'm just kidding. And we grew up in a very culturally Catholic family."

"A lot of guys growing up in Connecticut that are sports fans maybe have it in the back of their mind to work for ESPN someday," he says.

So after graduating from Providence, Federico got a job as a temp in ESPN’s tape library. He’d go to a huge warehouse to track down video tapes for the different ESPN shows.

"I would put it in a basket of a bicycle, 'cause the warehouse was so big that I would ride this bicycle around, you know, getting all the different tapes that had been requested," he says.

Then Federico would return to the ESPN campus to deliver the tapes.

"And it was cool, 'cause I got to meet a lot of different people all over ESPN’s campus," he says. "And I was asking questions like, 'What do you do?' And, 'What is your job like?' And I made a lot of friends that way."

In 2007, after about six months working the tape library, 23-year-old Anthony Federico landed in that role as a content editor for ESPN's mobile website.

"It was really cool," he says. "My job was to watch the night of sports unfold and kind of make editorial decisions in real time about what stories we're going to lead with, what angles we're going to promote."

Federico says he was responsible for writing and publishing headlines — there wasn't someone else to check his work.

"It’s 'everything needs to happen five minutes ago' kind of sense of urgency," he says. "You know, deadline culture. And that was part of the draw of it — how exciting and fast-paced my work was. And, yeah, everything happens very quickly."

"The talk of the sports world was Jeremy Lin," Federico says.

Lin — an undrafted point guard out of Harvard and, at the time, the only Asian American in the NBA — led the Knicks to seven straight wins. He was on the cover of Sports Illustrated two weeks in a row.

For Anthony Federico, “Linsanity” wasn’t just a great story. The Knicks had always been his favorite team.

"It was exciting," he says.

Then, on the night of Feb. 17, 2012, Federico was at his desk at ESPN, and Jeremy Lin and the Knicks were playing the New Orleans Hornets. 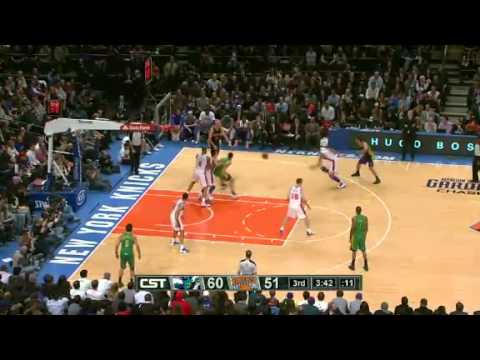 "And he played poorly," Federico says. "And the Knicks lost.

"And at 2:30 in the morning, I wrote a headline to reflect his first display of weakness as a starter for the Knicks. And I wrote the headline 'Chink in the Armor.' "

This was the headline that went viral, that sent Federico into the bathroom to throw up.

"I was shocked that people were misinterpreting this headline as a racial slur, and not as an expression to describe his first display of weakness," Federico says.

Federico would later say the headline was a "lapse in judgement" and "an awful editorial omission."

When Federico woke up a few hours after the headline was published, the story was all over the internet.

"My name and address got leaked to the media, so the Paparazzi started following me around," he says. "And [I] started getting hate mail and death threats from all over the world. And a lot of the late night talk shows were roasting me, and, you know, my face was on a lot of newspapers. And I was this big racist villain. It was brutal."

Federico was fired. He says he learned the news on a conference call, but he declined to share what was said.

"I appreciate that that was a headline that I should have foreseen the consequences to," he says. "And I would have loved to have been defended — that I was a good employee for a number of years, and that everyone who knew me at the company spoke very highly of my character.

"Those were the worst 30 days of my life," he says. "I filed for unemployment, which is humbling. My family was great. My close friends were great. I started looking for work, but I was, as you might imagine, pretty toxic in the sports media industry. I thought that I didn't deserve what happened to me, and I blamed God for that. And I thought about killing myself several times.

"And then Jeremy Lin himself reached out to me."

Federico says it started with an email from Jeremy Lin's cousin.

"It was polite and gracious — just, ‘When [the Knicks] get back from their next road trip, [Jeremy] would like to meet you in Manhattan for lunch,’ " Federico recalls. "And at first I was like, 'Yeah, right. Just some prankster having fun with me.' "

But Federico checked it out. The invitation was real.

Heading into that lunch with Lin, Federico says he was nervous. He didn’t need to be.

"He told me that he didn't think that the headline was racial in intent, and that was so huge to hear," Federico recalls. "I'm eternally grateful to him for his kindness. So we talked about the headline for a few minutes, and then we talked mostly about the world and our faith."

Federico views that conversation as a turning point for his mental health.

"Very much so," he says. "I felt like like that was a moment of, 'Wow, he didn't have to do this.' In fact, it probably would have been easier for him to just let it go. That is the kind of gesture that someone doesn’t forget."

Around that same time, Federico landed a new job with a sports media startup in Stamford, Connecticut.

He says it felt like now his life could start over again.

During his lunch breaks, Federico began going on walks around Stamford.

"On one of my walks, I happened upon a Catholic church, a busy basilica in the middle of downtown Stamford that was having Mass during the day," he says. "And I didn't even know that Catholics go to Mass on weekdays, and not just on Sundays. But the doors were open. I could see them going to church in there and [thought] maybe that could be cool, but, 'Nah, I'm not that kinda guy.'

"So on the first day I go past it, and second day I go past it. And, how biblical, on the third day I decide I'm going to go to church in the middle of the afternoon on a Wednesday. And I went into this 12:10 p.m. Mass. The regulars kind of called it the 'suit and tie Mass' because all the businessmen and women would leave their offices and come to Mass on their lunch break. And I started going to Mass every day on my lunch break. And it's this oasis of stillness and silence and ritual, and it was just such a sharp contrast that it called to me."

Federico noticed that, before Mass, the priest would hear confession.

"And often the line was so long for people going to confession that the priest would have to apologize to the five or six people still waiting in line, because he had to run up and start the Mass on time," Federico says. "And, every day, I would see on this priest’s face this, like, anguish. So I was watching him one day, and I said, 'Lord, if only we had more priests, we could have two lines of confession going —'  Ohhh, 'If only we had more priests.' "

Federico says that as a kid people had told him he should grow up to be a priest. But he hadn't really taken the idea seriously. Until now.

"I applied to be a seminarian for the Archdiocese of Hartford, Connecticut. And I was accepted. I thought I would go to seminary for one month and hate it. But I was there for six years, and I've never been happier," he says. "And then, just last June 22, I was ordained a priest of Jesus Christ for the Catholic Church."

Father Anthony Federico believes his experience facing social media outrage and death threats will shape his work as a priest.

"I think a sense of sympathy for what people are going through, and how everyone has a story that goes deeper than their worst moment or one thing they put out on the internet," he says. "And I have a sense of what it’s like to be angry at God in this big way, and I can relate to them when they bring me their struggles and their hopes and their dreams and their fears.

"And I think that that feeling of being abandoned by God was part of this whole process of preparing me for priesthood."

Federico is now assigned to St. Bridget of Sweden Parish in Cheshire, Connecticut. He says he still avidly follows the Yankees and Knicks.

He also pays attention when Jeremy Lin comes up in the news.

"I said a prayer for him recently when he was kind of public about his free agency situation," he says.

Back in July, Lin — who, since that incredible two-week stretch with the Knicks in 2012, has struggled with injuries and bounced around to six different NBA teams — spoke on a Christian TV station in Taiwan.

Lin was crying as he said, “Rock bottom just seems to keep getting more and more rock bottom for me. … I feel like in some ways the NBA’s kind of given up on me."

"I hope he finds whatever it is he's looking for as well," Federico says.

Jeremy Lin is now playing for the Beijing Ducks in the Chinese Basketball Association.

Federico says he hasn't been in touch with Lin since their lunch, but he'd be open to reconnecting.

"Yeah, that would be cool," he says. "God knows what his schedule is like. But, as a priest, my priority is my people in my parish. And if it ever worked out that we could get together, that'd be great. And if not, that's cool, too, because I have such great affection for him."