One of the biggest stories from the 2018 Pyeongchang Winter Olympics was the integration of players from North and South Korea and the creation of the unified Korean women’s ice hockey team.

Against a backdrop of rising political tensions, the idea of a unified team was welcomed by many people. But not by all … including some who were closest to it.

Grace Lee made the 2018 South Korean women’s Olympic ice hockey team as a so-called “import”; a non-native player with enough Korean lineage to qualify. A few weeks before the Pyeongchang Olympics began, Lee was home in Colorado, resting and relaxing with family. Her dad told her he had heard rumors that North Korean players would be added to the South Korean roster.

"And so I remember texting Randi [Griffin] and Marissa [Brandt]," Lee says. "And Randi and Marissa were both like, 'No, it's not going to happen. Don't worry.' And then, as days passed, you know, news grew and grew and grew. And then, all of a sudden, it was like, 'All right. So they are coming over.' "

The team had been training for two years at sites in South Korea and North America. There had been challenges to overcome: language, culture and differences in hockey style. But the team had gelled. Now, nobody knew how the addition of players from North Korea would affect the squad.

"Two weeks before the Olympics — that's really close," forward Randi Griffin says. "You're in maintenance mode at that point, and just trying to mentally prepare yourself for this big event that you've been gearing up for.

"And to have something like this happen is just, like, the rug being completely swept out from under you. And there was also this immediate realization, like, not all of us are going to play now."

Under the rules set by the IOC, 12 North Korean players would be added to the existing roster of 23. Three North Koreans had to suit up for each game, meaning members of the original South Korean team would have to sit out to accommodate the new players.

"It's just so heartbreaking when you see someone's dreams just being snatched from them at the last second," Griffin says.

Amid the disappointment, there were news reports of unrest in South Korea. Most younger South Koreans welcomed the merger. Most older South Koreans couldn’t believe their nation had agreed to collaborate with the North. The South Korean players feared that the focus would be on politics, not on hockey, and that they’d already become political pawns.

Just two weeks before their first Olympic game, players for the South Korean team met their new teammates. Journalist Seth Berkman was there. 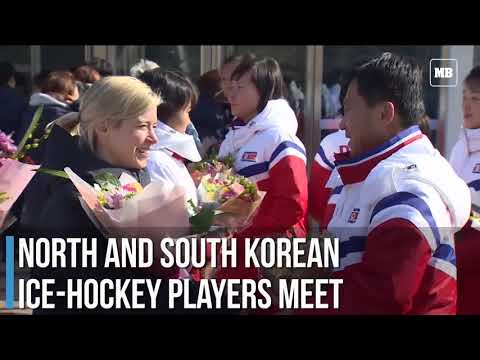 "It was a media circus," Berkman says. "And all the South Korean players knew this is basically just a big photo opportunity kind of thing. And so, standing out there in the freezing cold in the end of January, they were not very thrilled to be there."

"We had been coached on exactly what to do and how to act," Griffin says.

"And they stepped off the bus, and our coach had given, I think, seven of us flowers to give to them," Lee says. "And that exchange was super awkward, because there's still a lot of resentment from our side. And you could tell a lot of the North Koreans were uncomfortable with the situation as well."

"I'd say the first week or so, it was still very icy," Berkman says. "There were so many handlers around the North Korean players that a lot of the South Koreans felt they couldn't make any kind of genuine attachment with them. But, over time, whether that was finding time alone during lunch or in the cafeteria or even just sneaking around to each other's dorms, those walls started to break down a little bit."

On the ice, the players spoke different languages. The South Koreans used English hockey terms, like “pass.” When the North Koreans wanted a pass, they’d say “contact me” in Korean. So a makeshift dictionary was created to help break down the language barrier.

"Marissa doesn't speak any Korean. Kim doesn't speak any English at all," Berkman says. "But they had just kind of this rapport. And, every day, Kim would go up to Marissa and kind of just signal that she wanted to see her cell phone. And so Marissa would hand it to her, and Kim would just stare at the photos of Marissa with her friends in the photo album for 10 minutes or so. And who only knows what she's thinking in that moment? But that was something Marissa definitely picked up on: 'What's life like for her?' "

On Feb. 4, 2018, after a week and a half of practice, the unified team was escorted by a police caravan to a 3,000 seat stadium in Incheon. There, they’d play an exhibition game against Sweden. When the tickets had gone on sale a week earlier, they sold out in minutes.

"We got to the rink, and there's so many protesters just everywhere that we couldn't get through for at least half an hour to 45 minutes," Lee says. 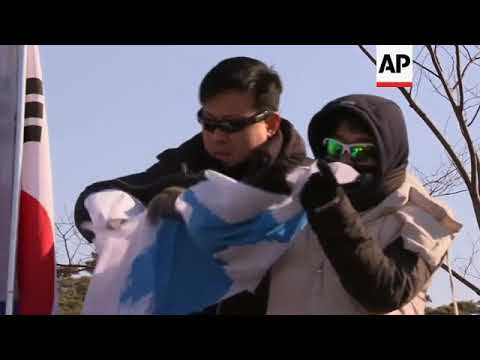 "One side of the road was pro-unified team supporters," Berkman says. "Others were against it, and just kind of shouting chants back and forth to each other."

"I think seeing the crowds and the protests, seeing that in person, it was kind of, I would say, an awakening," Griffin says.

'They're Not Normal Cheerleaders' 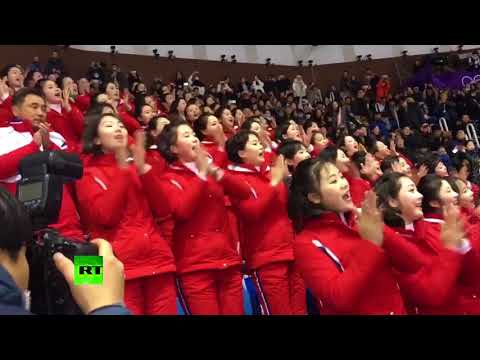 "Those cheerleaders were super weird," Griffin says. "Like, what was up with that? They're not normal cheerleaders."

"We could be on defense for three minutes, and they'd just start chanting, you know, 'We are one, we are one,' ” Lee says. "It's nice to have their support but, then again, we're at a hockey game, and we're down, 6-0. And so it's pretty tough to hear that."

"It's not like, 'Woooh! They came here with their pom poms, because they love hockey!' " Griffin says. "Like, no. They probably have really awful lives. And I'm not going to stand here and act like they're free people who came here and are doing this out of the pureness of their love for the sport or for Korea. Not at all."

Korea lost to Switzerland, 8-0. But much of the media coverage focused on the presence of South Korean President Moon Jae-in and North Korean leader Kim Jong Un's sister and a host of other dignitaries.

"And then, after the game, they came down and wanted to speak to the team," Berkman says. " 'Good job! Good effort!' kind of thing. Which none of them wanted to hear at that point."

"I think we all felt embarrassed. And we wanted to just kind of be with each other," Griffin says. "And we were like, 'Wow, that was really hard.' "

"And I actually, at one point, had a North Korean as my line mate for, like, a period," Griffin says. "And I had one of my teammates lean over, and she was like, 'You know, you shouldn't pass to her right in front of the net like that. She might score. We really don't want a North Korean to score. That would look terrible.' That shows a level of conflict that I think players on our team were experiencing."

Korea lost the rest of its games. But Griffin says there were a couple of bright moments, like the 2-0 consolation round loss to Switzerland.

"They're the defending bronze medal champions. We held them to two goals. To me, that's incredible. Nobody cared. But I'm like, 'We're capable of playing that way.' And so we at least achieved that," Griffin says.

And, during their days together, the ice had melted a bit: players had dined together, listened to K-pop songs and enjoyed each other’s company.

"The North Koreans were dressed up in these sort of — they looked like these little Russian hats and suits, very formal," Griffin says. "And players gave them little trinkets that they could take home that wouldn't get them in trouble. And my experience of it was like, 'What world are these people going back to?' It's really hard to think about that."

These days, Randi Griffin is a data scientist. Grace Lee plays hockey and studies at Yale. Both would appear to have bright futures.

There’s almost no chance they’ll ever see the North Korean players again. So they’ll just have to keep wondering what their ex-teammates’ futures hold for them, and if their brief moment in the political spotlight changed anything.

Seth Berkman’s book is "A Team Of Their Own: How An International Sisterhood Made Olympic History."