On Oct. 18, a social uprising began in Chile over the rising cost of living and economic inequality. Since that day, hundreds of protests have taken place nationwide.

And six days after the protests began, four strangers stopped in the middle of a crowded street in a small town outside Santiago to pose together for a photo.

"It was something unnatural," says Antonino Valenzuela, one of the four strangers. "Because, when you walk in the street, unless you see a famous person you say, 'Can we take a photo?' But we are not famous. And just because we were wearing different shirts, this happened."

To understand this moment, we first need to know that most people in Chile, like Antonino, are huge fans of fútbol — or soccer, as we call it in the States.

Culture Of Fandom And Rivalries

"On Saturday and Sunday in my house we watch around — I don't know — around 10 matches," Antonino says. "In my house, my mother doesn't like fútbol — or doesn't enjoy fútbol, at least. My mother is not very happy with that situation, because we kidnap the TV for us."

"I remember once that my father took a sofa, and he threw it through the window, because Chile lost the match at the last minute," Antonino says. "So we are very [big] fan[s] of fútbol."

Although Antonino watches a lot of different matches, his true loyalty belongs to one team only.

"I support Colo-Colo, the biggest team of Chile. The most popular, of course," he says. "It’s fun for me to fight or argue with other people from other teams, because I have the argument: 'My team is the biggest one. My team have won more than yours.' And it's very fun for me, that game."

Colo-Colo's biggest rival is also based in Santiago: Universidad de Chile, the second biggest club in the country.

"This fanaticism starts in elementary school, where we all play fútbol during recess," says Raul Henriquez. "And the matches are always Universidad de Chile versus Colo-Colo."

Raul works at a restaurant on the weekends, so he can’t make it to the stadium often. But he always makes sure to catch the highlights.

"I remember once that my father took a sofa, and he threw it through the window, because Chile lost the match at the last minute."

This rivalry between clubs is rooted in Chile's culture. If you support Colo-Colo, you basically have to hate Universidad de Chile ... and vice versa.

Gonzalo Fuentealba is a fan of Universidad Católica. His team’s rival?

"Everyone," he jokes. "All are rivals of Universidad Católica."

Gonzalo is a local music teacher.

"When my team loses I get very, very angry," Gonzalo says. "So, when I arrive to school on Monday after a loss, all my students are waiting in my classroom ready to tease me."

'I Will Never Go Back'

Sometimes, it's more than teasing.

"I remember that once I went to my grandparents' house, because I wanted to watch a football match," Antonino recalls, "and I went there with my Colo-Colo jersey. And I didn’t think that I was going to walk in the streets in a place where there are many, many, many Universidad de Chile fans. And they were very aggressive with me. They tried to hit me just because I was wearing a Colo-Colo jersey, so I had to run away, escape. And it was a very scary situation." 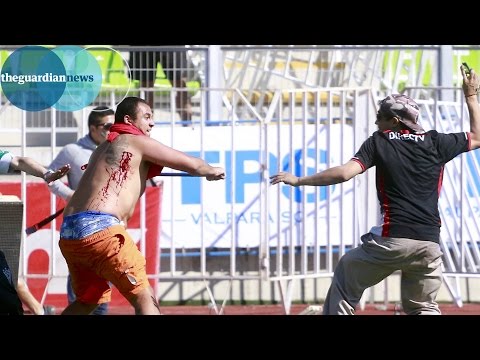 At the stadium, these rivalries are so violent the opposing fans can't even sit next to each other.

"In 2018, Colo-Colo was playing against Santiago Wanderers in the final of the Champions Cup, and they were winning, 3-0," says Cristian Cespedes, another Colo-Colo fan. "In the middle of the game, the fans of the Wanderers started screaming at us, throwing stones and firecrackers and trying to attack us. I was with my wife and my son. it was a very intense situation.

That was the last time Cristian went to the stadium to watch a game.

Cristian, Antonino, Gonzalo and Raul had never met. But, in October, that changed.

The social movement in Chile had been building for years — as the cost of living rose and salaries didn’t keep up. Close to half the Chilean population earns just over $500 a month. And that doesn’t get you much in Santiago.

So on Oct. 7, when a fare increase for the capital's metro went into effect, students began jumping the turnstile in protest. And, by Friday of the following week, the crowds grew ... a lot.

Six days later, Antonino, Raul, Gonzalo and Cristian took to the streets to join the movement — each wearing their team's jersey.

The march was organized by fans of Colo-Colo. But, to Raul's surprise, the streets were filled with people from opposing clubs and families of all ages.

"The march was very peaceful," Raul says. "There were no incidents between the fans of Colo-Colo and Universidad de Chile. We were all supporting each other, giving one another water and singing together. It was a scene I've never seen before because usually you only see flags of Colo-Colo or Universidad de Chile separately. But, that day, they were flying together."

Cristian was marching with his family when he noticed Antonino, Raul and Gonzalo.

"I saw the three of them wearing all different shirts, just walking and marching for the same cause, and I said, 'Look, we are all together,' " Cristian says.

Cristian asked if they could take a photo together.

"And we said, 'OK,' " Antonino recalls. "With Gonzalo, we decided to play, 'OK, we are so beautiful that they want a picture with us,' and we made games with that."

"With this photo, I wanted to show people that you can do things that maybe you thought were impossible," Cristian says.

"Something like fútbol divided us for so many years. This social situation got us together," Antonino says. "So people reacted very well. They say, 'Oh, beautiful.' I remember an older woman said, 'Bravo! Bravo! That’s beautiful. That’s the idea. We are all together.' "

'A Symbol Of Unity'

After taking the photo, they all dispersed and continued marching onward. But, as soon as Cristian got home, he posted the photo online.

"I received many comments, and they were all positive — saying this photo is iconic; it’s a symbol of unity, solidarity, of rivals coming together," Cristian says.

Antonino says he will never forget that moment.

"People understood that this situation, this fight, is bigger than a stupid fight, like fight for who is the best team," he says. "No, we are fighting for a better way of life, for a better situation. And we are going to fight until dignity becomes something normal. That's what we are looking for. For dignity."

As the movement quiets down and fútbol gears up again for a new season, these rivalries will likely intensify again. But for Antonino Valenzuela, Raul Henriquez, Gonzalo Fuentealba and Cristian Cespedes, this moment will stick.

And come next year — on the anniversary — they plan to retake this photo. And hope to do so every year after that.