This story was re-broadcast during our 6/20/20 episode. It originally aired in October 2018.

On Oct. 16, 1968, Wyomia Tyus and about 200 other athletes crammed into the stands of the Olympic stadium in Mexico City to watch Americans Tommie Smith and John Carlos accept their medals.

"They came out of the chute to walk out to the victory stand, and I could see them," Wyomia remembers. "And as they start walking, I’m looking down and — 'Oh, they don’t have their shoes on? What are they doing?' "

Everyone was expecting … something. Smith and Carlos had been heavily involved with the group calling for a Black boycott of the Games to protest racial inequality. But they’d decided to make their stand in a different way. 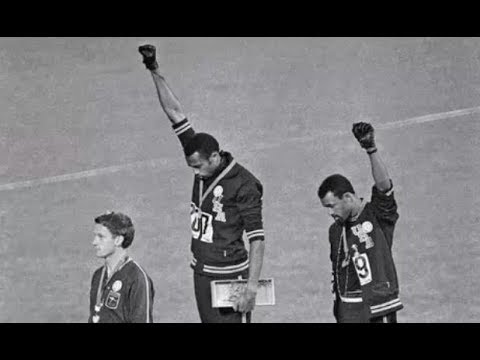 "And they put up their fists, and it was like, ‘My ...’ " Wyomia says. "The stadium got so quiet. Just absolute silence. And then the next thing you could hear was people mumbling, talking. Then you start to hear the voices get louder, whistling, and you hear boos and the cheers. I keep thinking, ‘I’m really afraid for them.’

Fifty years later, everyone knows the story of Tommie Smith and John Carlos. But Wyomia Tyus made a stand at those Olympics, too. And far fewer people know her story.

Wyomia grew up in the Jim Crow era in a small town called Griffin, Georgia. Her father was a tenant farmer. All of her neighbors were white. And everyone got along pretty well. Wyomia called it her “safe haven.”

She remembers this one time when a new family moved into the neighborhood. One of the boys called Wyomia and her brothers the n-word. But the Tyus kids knew how to deal with that.

"We'd draw a line in the sand or in the dirt and just say, ‘If you step across and call us names, that's a problem right there,’ " Wyomia says.

The boy stepped across the line and used that word again.

"And my brother said, ‘Well, you know what, I’ll let my sister take care of it.’ I took care of him — kind of beat him up a little bit. And from that day, on we really had no problems."

And this is how it would go. Every so often a new family would move in. Wyomia would fight. Life would go on — safe haven restored. Her father taught her early not to shy away from conflict.

"He just wanted us to make sure we were strong people," Wyomia says. "Anything we wanted to do we needed to believe in it, fight for it. [He] always told us, ‘It’s not always going to be this way. Things are going to change. And I may not see it in my lifetime, but you will.’ "

Things did change — but not in the way Wyomia’s father had hoped. One night, when Wyomia was 14, she was at church with her family. Four white men walked in.

"It’s, like, what in the world?" Wyomia says. "What could they want? And they were looking for my dad in the church."

The men were her neighbors. They’d come to tell Wyomia’s family that their house was on fire. And just like that, Wyomia lost her safe haven. Her father fell into a deep depression. He never recovered.

"Right after that, my father passed away, and that was really devastating to me," Wyomia says. "My dad was my rock. And I just, you know, I became a very quiet person, not really talking very much."

Wyomia was 15 and still in her “quiet phase” when she met Ed Temple, the women’s track coach at Tennessee State. He invited her to come to Nashville for the summer to train with other high school runners.

The camp was free, but Wyomia couldn’t afford to get there. Her high school took up a collection and gave her an envelope filled with $23.

"And when I get to the train station — not the airport — when I get off in Nashville, Tennessee, Mr. Temple was there," Wyomia says. "And I was happy about that, because I didn’t know what I was going to do otherwise. He says, ‘This is Rudolph.’ I said, ‘OK, hi’ — like, Rudolph? Who is this person?"

Later, when she got to the dorms and heard some of the other girls talking, Wyomia figured it out.

It was Wilma Rudolph.

"She'd won three gold medals in the Olympics in Rome," Wyomia says. "And she was quite famous." 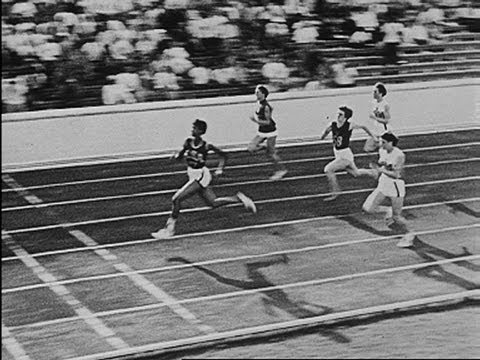 A few years later, Wyomia enrolled at Tennessee State, where Ed Temple was the track coach and the women on the team were called the Tigerbelles.

Over more than four decades coaching the Tigerbelles, Mr. Temple sent 40 women to the Olympics. His athletes won 23 medals.

And winning medals was just what Wyomia Tyus wanted to do.

In 1964, when Wyomia was 19, Mr. Temple took her to the Olympic trials. The top three sprinters would go to Tokyo. Wyomia came in third.

"And he was like, ‘Don’t worry about it. We're not looking for great things for you — we just think ’68 is going to be your year,’ " Wyomia remembers.

But once she got to Tokyo, Wyomia started thinking she might have a shot in ’64 after all. She won her first heat. In her second, she set a new Olympic record. She entered the finals undefeated.

The Way Things Were

Wyomia says she and Edith were treated with respect by the Japanese. But when they returned home, they were reminded of the way things were.

Blacks had to sit in the back of the bus. Drink from a different water fountain. They didn’t have equal opportunities. And they didn’t receive a hero’s welcome after winning gold and silver at the Olympics.

"Edith and I are both from Georgia," Wyomia says. "She's from Atlanta, Georgia. They only gave us the parade in the Black neighborhood. They didn’t give us a parade throughout Atlanta. You’re talking about the ’60s. And there was not that much they were doing for people of color."

Wyomia and Edith weren’t the only Black athletes who noticed they’d been treated better abroad than at home. As the 1968 Games approached, Wyomia started hearing about calls for Black athletes to boycott the Olympics in Mexico City.

"I say I heard about it," Wyomia says. "It’s not like they called, and we talked about it on the phone. We were just not contacted as women. They just felt like, ‘Oh, they’ll go along with whatever we say.’ "

Wyomia doesn’t fault anyone for not asking for her opinion on the boycott. But she does wonder why they assumed she’d go along. “How can you speak for a group of people?” she asks.

Eventually, most athletes decided they had more to lose by staying at home than they did by competing in Mexico City. So they went. And it was there that the organizers of the movement —  now called the Olympic Project for Human Rights — finally held a meeting and invited everyone, including the women.

"We were trying to talk about what could we do as a group," Wyomia says. "And nobody could come up with one thing. So we just left it as, ‘Whatever you like to do would be OK.’ And then when Tommie and Carlos did what they did on the victory stand, it was so powerful. There was nothing for anyone else to do." 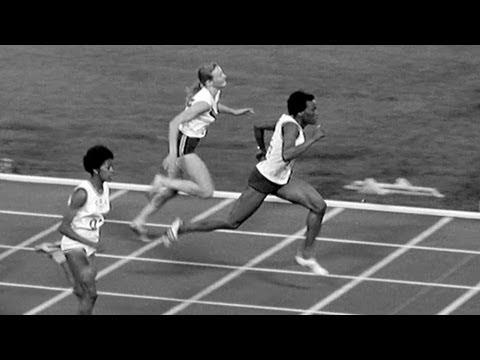 By the time Tommie Smith and John Carlos raised their fists, Wyomia Tyus had already made Olympic history by becoming the first person to repeat as 100-meter champion. In the final, instead of wearing her uniform shorts — white with red and blue trim — she’d worn black shorts in support of the Project for Human Rights. No one had noticed her quiet protest.

"After the relay, we went into the press room — and reporters just all over us about what Tommie and Carlos had done, and ‘What do you think about this?’ " Wyomia says.

Wyomia was just starting to come out of her “quiet phase.” She still hadn’t said more than a word or two at a time to reporters.

But this time, when reporters asked what she thought, Wyomia had something to say:

“What is there to think? They made a statement. We all know that we’re fighting for human rights. That’s what they stood for on the victory stand — human rights for everyone, everywhere. And to support that and to support them, I’m dedicating my medal to them. I believe in what they did.”

"I found my voice," Wyomia says. "You know, there are certain things in life that makes you change. And for me, it makes me become a better person — made me become the person I am."

But while Wyomia had changed, life back home still had not. Nobody was interested in putting a Black woman on a pedestal — not even the first-ever back-to-back gold medalist in the 100 meters.

"Mr. Temple had prepared us," Wyomia says. "He would always tell us all the time, ‘You could go to the Olympic Games, you could win 10 gold medals — but you come back here, they don’t really care. They give you a parade and a key that doesn’t work.' "

Wyomia kept fighting. She moved to California, helped establish the Women’s Sports Foundation and continued to champion for equal rights.

And while she says she sometimes looks around and wonders if she’s back in 1968, she has one lasting reminder that not everything is the same as it was 50 years ago.

In 1999, Wyomia was asked to come back to her hometown of Griffin, Georgia for the opening of the Wyomia Tyus Olympic Park. She thought they’d put it in the Black neighborhood. She thought it would be small.

But when she arrived, she discovered that her park was huge — 168 acres with soccer fields and baseball fields. Hiking trails and a pond you can fish in.

The town even put together a torch ceremony, with Wyomia running the last lap.

"One of the officials in Griffin came up to me and said, ‘Wyomia, we hope this makes up for the things we didn't do,’ " Wyomia says. "I didn’t look at it as a makeup. I looked at it more that the people in the town has grown.

"It takes time. I know we would like to see things move a lot quicker. I just keep thinking about my dad saying, ‘It’s not always going to be this way. People are going to change.’

Ed Temple died in 2016. That’s when Wyomia Tyus decided to write a book to tell people about the good work he’d done. It’s called “Tigerbelle: The Wyomia Tyus Story.”
This story appears as part of a special episode of Only A Game devoted to athletes and protest.