Asher Price was one of approximately 97,000 fans in the stadium when the University of Texas played Kansas in October of last year.

"The crowd was overflowing with burnt orange and white T-shirts," Asher says. "And people were holding aloft their 'Hook 'em Horns.' "

That's to say, it was pretty much your average home football game at UT ...  until halftime.

"The 1969 National Championship University of Texas Longhorn football team was recognized on the field," Asher says. "The band was serenading them. The crowd was cheering them on."

KG: The band was serenading them. Do you remember what they were playing?

AP: I think they played, "The Eyes of Texas Are Upon You." So this is, you know, the school fight song. And so the crowd was presenting their Hook 'em Horns to the players on the field, and the players on the field were holding their Hook 'em Horns aloft back up to the crowd. It was actually, in many ways, a touching scene. I mean, here were these guys being feted for their boyhood triumphs. 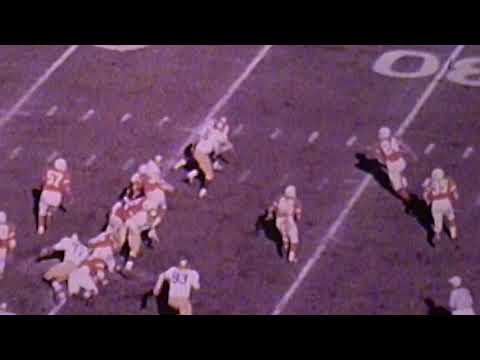 KG: Was there any attempt to acknowledge the sort of awkwardness of the situation?

AP: No, none at all. To me, in the stands, that was troubling. You know, the University of Texas has a complicated relationship with its past. In some ways, it's been taking it head on. It's in recent years removed Confederate memorials from campus. But it remains a touchy subject at the University of Texas about how to handle these issues.

And this scene was especially troubling to Asher Price because, over the past few years, he’s been researching and writing a book about Earl Campbell, an African American running back who played for the Longhorns in the mid-to-late '70s, not long after the University of Texas finally integrated their football team. As part of his research, Asher requested boxes of documents from the University of Texas off-site archive.

AP: And these librarians come with these gloves and hand them carefully to you. And you start looking through the boxes, and there are folders that say things like "Negroes," "Negroes in colleges." And you start going through these documents and they're — they're shocking.

They spell out the the very deliberative, bureaucratic way that people in power at the University of Texas, after the Brown vs. Board of Education decision in 1954, how they tried to prevent black students from enrolling at the University of Texas, and then how to keep them from being graduate teaching assistants, how to keep them off the football team.

It's not surprising maybe that these institutions did everything they could to resist integration. But there is real power in these documents in illuminating how people behind closed doors tried to maintain segregation, and how they went about in a very methodical manner to try to keep the status quo.

KG: So as you mentioned, the Supreme Court ruled in the spring of 1954, and that ruling required educational institutions to integrate their classrooms. Tell me about Marion Ford. Who was he, and why did he want to go to UT?

AP: Marion Ford is a charismatic black kid from Houston. He's 17 years old in 1954. He's a top-notch swimmer. He writes for the newspaper. He's in the Chemistry Honors Society. He goes to an all-black high school in Houston. He also plays football.

KG: The very first time that Marion Ford applied, he wasn't immediately accepted into the university. So, at first, he said he wanted to be a chemistry major, right?

"The Dean of Admissions relents. But he sends him this completely condescending letter of admissions, saying, 'You have to get over your inferiority complex.' "

Here's a direct quote from the letter Marion Ford sent to the dean of admissions: "I am not interested in living in your dormitories or becoming socially prominent with the Caucasians, but I do want a chance to get the best formal training in my state."

Here are the dean of admission's actual words: "I hope that you do well in the university, and that you will get over your inferiority complex and the idea that you are being discriminated against."

And with that, Marion Ford became one of about a half dozen African American students who were admitted to the University of Texas in the summer of 1954.

And that’s where the real trouble started for Marion Ford.

AP: He's interviewed by a Houston reporter about being one of the first black students admitted to the University of Texas. You can imagine, it’s a big deal. And so he gives this interview. And one of the things he says is, "I would love to try out for the Longhorn football team."

Now, one of the people who reads this story — actually is asked for comment is a regent, University of Texas regent. And he says, "Well, we'll have to see what's in the best interests of the University." That's his on-the-record comment. But, privately, he’s alarmed. He gets in touch with the chair of the board of regents. This is the body that oversees the University of Texas.

And the chair of the board of regents quickly writes to the state attorney general. They huddle. And the decision they arrive at is to rescind the admission of not only Marion Ford, but all the other black students that they had admitted that summer of 1954. And Marion Ford is refunded his $20 that he had plunked down for his dorm room — an all-black dorm room, I should add — at the University of Texas.

As a consequence of Marion Ford telling a reporter that he wanted to play football for the UT Longhorns, the school placed a moratorium on black student admissions. Ford was told to enroll in one of the state’s all-black schools instead. He could apply to UT again once he’d finished his introductory courses.

AP: And during that year, the university puts together a select committee involving a few professors and high-ranking administrators, and they decide to adopt SATs, basically, [a] selective admissions test, to, again, exclude as many African Americans as possible.

And in these documents they include, like, math worksheets, basically — a calculation of, if they set the SAT cutoff score at such and such a level, they're likely to suppress the number of African Americans that enroll at the university.

"The university puts together a select committee ... and they decide to adopt SATs, basically, [a] selective admissions test to, again, exclude as many African Americans as possible."

KG: And those calculations also show the disproportionate way in which that testing would affect black students and white students, right?

KG: As you're going through all these documents and reading them one by one, what comes to mind for you? What is that like for you?

AP: I mean, these documents are delicate. They're in this onion skin paper. And, in a perverse sort of way, they're beautiful documents. They're kind of carefully written, handsomely written. But they're also stomach-turning and disturbing, of course. It makes me think of the heroism, actually, of these black students who are trying to enter the University of Texas.

KG: How did the university respond to you unearthing these documents? Had they been hoping no one would see them?

After sending Marion Ford and the other African American students away in the summer of 1954, Ford and a few others were allowed to enroll in the fall of 1956.

And, that fall, USC was scheduled to come to Austin to play the Longhorns. They had a running back named Cornelius Roberts.

"To their credit, they didn't hide under a stone ... They called it out for what it was."

AP: Cornelius Roberts is known as the "Chocolate Rocket." He's a black football player at USC. And so they have this problem. They have Cornelius Roberts coming. And there's a memo from the dean of students, the University of Texas president, about what we're gonna do about African American fans who want to come watch the game.

And they decide that they'll have separate seating sections, of course. And they go on in such minute detail about how to keep blacks and whites separate. How are we going to sell hot dogs to these people, but not these people? This is the kind of level on which these administrators are operating.

Marion Ford is now in the stands as part of this first group of students who are finally allowed to enroll in the university. And he goes down to the beleaguered UT football coach, a guy named Ed Price, and says, "You know, you really could use me out there. Let me try out for the team." And he says, "No dice. It's not going to happen. It's not in my hands." He doesn't allow Ford to try out for the team. And it won't be until 1970 that a black player is allowed to play at the University of Texas.

KG: So how did that come to be? How and why did the University of Texas finally integrate its football team?

AP: That's a great question. And, in a way, it's a long story. But the short of it is that Darrell Royal, who takes over from Ed Price — this mediocre football coach — and kind of revives University of Texas football program. He ultimately, as the early 1970s roll around, late 1960s and early 1970s, wants to make sure he puts the most competitive team on the field.

So, on one hand — and we can bracket this — it's about winning. But, by the time 1970 rolls around, Darrell Royal has presided over an all-white team for at least a dozen years. And they've been pretty successful. But Royal himself is starting to worry about his legacy. He had become close friends with Lyndon Baines Johnson who is urging him to do more to help black students on campus.

Darrell Royal is maybe the most powerful person on the University of Texas campus. He's led the Longhorns to national championships. He's been given a full professorship by the regents. He's secure. And so it's really on his shoulders whether he wants to allow black players at UT or not.

KG: In some ways, Marion Ford is sort of the hero of our little story here. So what happened to him? Did he ever get that degree in chemical engineering?

AP: Marion Ford actually became a dentist. He settled in Houston. He had a very successful practice. And, funny enough, through the end of his life, he was a devoted UT fan. He loved going to UT alumni meetups in Houston. He was a big fan of the football team.

That's a kind of other thing that is really fascinating about a lot of the early black admits to the University of Texas. They're quite loyal to the university. They're proud of the university, even as they're mindful of the history in which they participated.

Asher Price is the author of "Earl Campbell: Yards After Contact."