No one knows when, or if, the NBA season will resume. But coaches gotta coach. And, last week, San Antonio Spurs head coach Gregg Popovich used his quite considerable skills to inspire a team that has nothing to do with sports. To talk about that, Eric Cooper, President and CEO of the San Antonio Food Bank, joined Only A Game.

KG: OK. So to understand why your team was in need of inspiration, I want to go back to April 9. 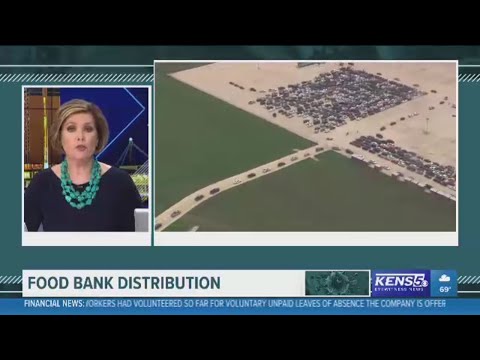 According to news reports that aired that day, cars were lined up before sunrise. The food bank planned to give away food to 6,000 families. What actually ended up happening?

EC: Well, Karen, in this COVID-19 crisis, food banks literally across America have seen some unprecedented demand. We knew that many of the families had just spent their last paycheck dollar, and they were hurting. We wanted to be there for them.

EC: It gets pretty warm here, and when we showed up that day for the distribution, we had two shifts of volunteers. And it was going great. I actually was on site first thing. And then we're also delivering home boxes to seniors and shut-ins. And, as I left the distribution site, I got onto the interstate. And as I drove up the interstate in the opposite direction of our distribution, I just kept seeing cars and cars and cars. And I drove for miles and miles and miles. And that's when the panic started to set in.

I had an idea what maybe 6,000 cars was gonna look like. But I knew that I was seeing more than that. And so, I called the warehouse to get more food delivered to the site. And I got back to our distribution. And we were just finishing up the second shift, and the volunteers were spent. I mean, Texas heat, Texas humidity. Everybody was just tired and felt like they couldn't go on. But, as I looked in the parking lot, there was probably 2,800 more families in their cars that had been waiting to get food. So we knew, obviously, we needed to hang in there.

"I met so many families in that line that just reminded me that it could happen to any of us. ... It was heartbreaking."

So I called our mayor, and he sent backups. We had some parks and recreations staff that were able to come over. And we just rallied. We planned on 6,000 families, but received 10,000 families, and we were able to get food to every family.

But, I was anxious, right? The last cars, I thought, they've got to be tired and frustrated for waiting. But I was greeted with just smiles and gratitude from those remaining families that had waited to get the food assistance. Many of them recently laid off, furloughed, some of them waiting on their unemployment checks that hadn't arrived yet.

I met so many families in that line that just reminded me that it could happen to any of us. Our community, it's hard working, you know. Hospitality, lots of travel, tourism, hotel, transportation, theme parks like SeaWorld and Six Flags — all of those sectors are now shut down. There is no work to be had. It just — it was heartbreaking.

KG: So, I know that Spurs head coach Gregg Popovich is on your advisory board. He's been a supporter of the food bank for decades. So how did this conference call happen? Did he reach out to you? Did you reach out to him?

EC: Yeah, so I was keeping Pop up to speed on kind of what was happening, and he's always kind of checking in. And, I tell you, the best thing that we needed was just a little bit of halftime coaching. And he said, "Put it together, Eric, and I'll be there."

And it was that Monday that we set up for him to make the conference call with almost 300 folks. We had all of our staff, which is about 250 employees, lots of our volunteers. But everybody got an inspirational talk from Coach Pop. And they asked a little bit about why he enjoys coaching, and how do you get through a period when you're up against a competitor that seems to have your number?

And so, comparing that to our work, it's about just staying firm. Just really being consistent, showing up. It's a box of groceries. It's a meal prepared. It's a child fed. It's a senior fed. And that we just need to keep hammering away.

KG: Now, some of the questions that your staff asked were not necessarily related to the food bank's mission, right? I heard that there was a question about Game 6 of the 2013 NBA Finals.

EC: Yeah. So Pop was a gentleman, you know, like, "You guys, what do you want to talk about?" And so, of course, lots of questions on players, and you know, "Who do you want to play horse with. Or not play horse with?" "How's so-and-so's 3-pointer?" And "What about this decision to bench Timmy [Duncan] in Game 6?" And Pop answered it, like, "This was the plan. We didn't think that we needed that on the court at the moment. And we think it was the right decision." And it was just a real life example of: You've gotta work the plan. And that's all any of us can do.

KG: We are not nearly to the end of that crisis, and there will be more food distributions. Has your team been able to use Pop's advice and inspiration as you move forward?

EC: They really enjoyed just that camaraderie and that simple friendship and expression of Pop. And, you know, he can be pretty hard-nosed, and he can be pretty intimidating. But I think for that period of time, you know, he just really leaned in. And it was fun. It was the perfect refueling, halftime break distraction from the intensity of the work that we're engaged in, and [it] obviously will help us through this season of struggle.

KG: I hope you have the coach on speed dial in case you need inspiration in the coming weeks.

EC: Yeah, no, I think — he always makes himself available. I think that's what makes the San Antonio Spurs so great. You can’t help but quickly become a Spurs fan once you really understand the organization: of who they are — with the coaches and the players and the owners — and how they love our city, and how they’re using their influence to bring about a greater yield than just a championship. It's about really looking after the well-being of our city.

Eric Cooper is the President and CEO of the San Antonio Food Bank. You can also find and support your local food bank through Feeding America.