A new argument that a country’s ultimate success, or failure, is tied to how the average person does. Doesn’t matter if it’s ancient Rome, Venice, China, or the U.S.A.

Why do nations rise, and why do they fall?  For centuries, explanations have rained down on us.  It’s geography.  It’s culture.  It’s climate.  Free markets.  Colonization.  Military might.

A whopping new study of the ultimate question says it comes down to this:  Whether it’s ancient Rome or Venice or China or the United States of America right now, the wealth of a nation is tied most closely to how much the average person shares in the overall growth of the economy.  That it really is about the ninety-nine percent.

This hour, On Point:  the hottest economist on the planet on why nations fail.
-Tom Ashbrook

Daron Acemoglu, a professor of economics at the Massachusetts Institute of Technology, he's the author of Why Nations Fail: The Origins of Power, Prosperity, and Poverty. He blogs at www.whynationsfail.com

The New York Times "Over the centuries, proposed answers have varied greatly. Smith declared that the difference between wealth and poverty resulted from the relative freedom of the markets; Thomas Malthus said poverty comes from overpopulation; and John Maynard Keynes claimed it was a byproduct of a lack of technocrats. (Of course, everyone knows that politicians love listening to wonky bureaucrats!) Jeffrey Sachs, one of the world's most famous economists, asserts that poor soil, lack of navigable rivers and tropical diseases are, in part, to blame. "

The Wall Street Journal "Why is Mexico poorer than the United States? In "Why Nations Fail," Daron Acemoglu and James Robinson blame the encomienda. After the defeat of the Aztec empire in 1521, the Spanish imposed the system as a means of extracting tribute from the local population. Each encomendero would be allocated a number of Native Americans, who would then be used essentially as slave labor."

The Boston Globe "The place was Venice, and if it is hard to imagine the charming tourist destination was once one of the richest places on the Earth, then that is precisely what MIT economist Daron Acemoglu wants me to understand. I had come to the Sloan School of Management cafeteria, its tall windows framing the Charles River, for coffee and a discussion of his favorite topic - why nations fail."

Video: Lecture On Why Nations Fail

Here is a lecture that Acemoglu gave in November 2011 at the University of Scranton, discussing why nations fail. 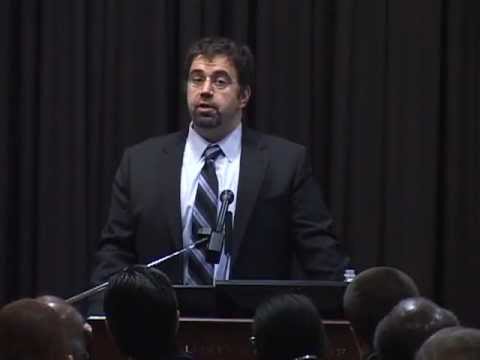 [Use the navigation bar at the bottom of this frame to reformat the excerpt to best suit your reading experience.]
http://www.scribd.com/doc/86100384/Excerpt-Why-Nations-Fail