Ai Weiwei, China’s most famous living artist and most creative political dissident joins us from Beijing for a rare appearance in American media.

He’s the irrepressible bearded bear of a gadfly out of Beijing with a twinkle in his eye and the conscience of an ancient nation on his mind.  On Time Magazine’s short list for Person of the Year, right behind winner Barack Obama.

A conceptual artist who’s no stranger to police beatings and imprisonment.  To the wrath of the China’s Communist Party.

This hour, On Point:  live from Beijing, China’s Ai Weiwei.  He’s with us.
-Tom Ashbrook

New Yorker "At the age of fifty-three, Ai has a capacious belly, close-cropped hair, a meaty, expressive face, and a black-and-white beard that stretches to his chest. The full picture is imposing, until he reveals a sly and whimsical sense of humor. “His beard is his makeup,” his brother, Ai Dan, told me."

New York Times " Given that a fair proportion of the millions of people who have watched the irresistibly catchy, irrepressibly cheesy YouTube music video“Gangnam Style,” by the South Korean singer Psy, have felt compelled to produce their own version, it’s possibly no surprise that the artist Anish Kapoor has followed suit, even if one doesn’t exactly think of him as the sort of person to be dancing around on YouTube."

Foreign Policy "The artist, dissident, and provocateur Ai Weiwei has been prohibited from leaving China since last April, when police held him in an isolation cell for 81 days. Passing the time was "impossible," he told me in an interview last year. "I really wished someone could beat me. Because at least that's human contact. Then you can see some anger. But to dismiss emotion, to be cut off from any reason, or anger, or fear, psychologically that's very threatening."" 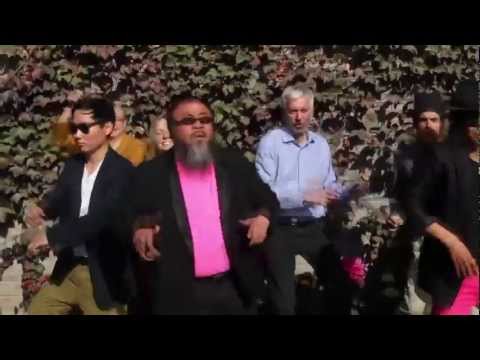 Here's a gallery of photos of Ai Weiwei's art.