New Yorker writer George Packer’s inside history of the great unwinding of America’s 20th century way of life and where we stand now.

New Yorker writer George Packer writes big and deep about the world, whether it’s Silicon Valley or the Iraq War or American inequality.

Now he’s writing about a great American era coming to an end.  The era of a strong middle class, and things you could count on, and "we’re all in this together."

A great "unwinding" of American institutions and assumptions.  It can feel like the end of America.  Packer’s been out talking with ordinary people and with our modern-day Gatsbys.

Up next On Point: George Packer on the great unwinding and the unsettling birth of a new America.
-- Tom Ashbrook

George Packer, writer at the New Yorker and author of the new book "The Unwinding: An Inner History Of The New America." He also recently wrote the New York Times op-ed "Celebrating Inequality" and the New Yorker feature "Change The World."

Excerpted from The Unwinding: An Inner History of the New America by George Packer, published in May 2013 by Farrar, Straus and Giroux, LLC. Copyright © 2013 by George Packer. All rights reserved.

You can also read a longer excerpt here.

No one can say when the unwinding began—when the coil that held Americans together in its secure and sometimes stifling grip first gave way. Like any great change, the unwinding began at countless times, in countless ways—and at some moment the country, always the same country, crossed a line of history and became irretrievably different.

If you were born around 1960 or afterward, you have spent your adult life in the vertigo of that unwinding. You watched structures that had been in place before your birth collapse like pillars of salt across the vast visible landscape—the farms of the Carolina Piedmont, the factories of the Mahoning Valley, Florida subdivisions, California schools. And other things, harder to see but no less vital in supporting the order of everyday life, changed beyond recognition—ways and means in Washington caucus rooms, taboos on New York trading desks, manners and morals everywhere. When the norms that made the old institutions useful began to unwind, and the leaders abandoned their posts, the Roosevelt Republic that had reigned for almost half a century came undone. The void was filled by the default force in American life, organized money.

The unwinding is nothing new. There have been unwindings every generation or two: the fall to earth of the Founders’ heavenly Republic in a noisy marketplace of quarrelsome factions; the war that tore the United States apart and turned them from plural to singular; the crash that laid waste to the business of America, making way for a democracy of bureau-crats and everymen. Each decline brought renewal, each implosion re-leased energy, out of each unwinding came a new cohesion.

The unwinding brings freedom, more than the world has ever granted, and to more kinds of people than ever before—freedom to go away, free-dom to return, freedom to change your story, get your facts, get hired, get fired, get high, marry, divorce, go broke, begin again, start a business, have it both ways, take it to the limit, walk away from the ruins, succeed be-yond your dreams and boast about it, fail abjectly and try again. And with freedom the unwinding brings its illusions, for all these pursuits are as fragile as thought balloons popping against circumstances. Winning and losing are all-American games, and in the unwinding winners win bigger than ever, floating away like bloated dirigibles, and losers have a long way to fall before they hit bottom, and sometimes they never do.

This much freedom leaves you on your own. More Americans than ever before live alone, but even a family can exist in isolation, just managing to survive in the shadow of a huge military base without a soul to lend a hand. A shiny new community can spring up overnight miles from any-where, then fade away just as fast. An old city can lose its industrial foundation and two-thirds of its people, while all its mainstays—churches, government, businesses, charities, unions—fall like building flats in a strong wind, hardly making a sound.

Alone on a landscape without solid structures, Americans have to im-provise their own destinies, plot their own stories of success and salva-tion. A North Carolina boy clutching a Bible in the sunlight grows up to receive a new vision of how the countryside could be resurrected. A young man goes to Washington and spends the rest of his career trying to recall the idea that drew him there in the first place. An Ohio girl has to hold her life together as everything around her falls apart, until, in middle age, she finally seizes the chance to do more than survive.

As these obscure Americans find their way in the unwinding, they pass alongside new monuments where the old institutions once stood— the outsized lives of their most famous countrymen, celebrities who only grow more exalted as other things recede. These icons sometimes occupy the personal place of household gods, and they offer themselves as answers to the riddle of how to live a good or better life.

In the unwinding, everything changes and nothing lasts, except for the voices, American voices, open, sentimental, angry, matter-of-fact; in-flected with borrowed ideas, God, TV, and the dimly remembered past— telling a joke above the noise of the assembly line, complaining behind window shades drawn against the world, thundering justice to a crowded park or an empty chamber, closing a deal on the phone, dreaming aloud late at night on a front porch as trucks rush by in the darkness.

Tweets From During The Show

The New York Times: Celebrating Inequality -- "What are celebrities, after all? They dominate the landscape, like giant monuments to aspiration, fulfillment and overreach. They are as intimate as they are grand, and they offer themselves for worship by ordinary people searching for a suitable object of devotion. But in times of widespread opportunity, the distance between gods and mortals closes, the monuments shrink closer to human size and the centrality of celebrities in the culture recedes. They loom larger in times like now, when inequality is soaring and trust in institutions — governments, corporations, schools, the press — is falling."

Chicago Tribune: Review: 'The Unwinding' By George Packer — "The New America of George Packer's ambitious history, "The Unwinding," is a morally compromised patchwork of failed institutions, Ponzi schemes, bankruptcies, foreclosures, ignorance and fear. But it is also a country where idealism still exists, and well-meaning individuals struggle to effect change in the face of overpowering obstacles."

Salon: 'The Unwinding': What's Gone Wrong With America — "Think of George Packer’s new book, “The Unwinding: An Inner History of the New America” as the un-Internet take on the transformation this country has undergone in the past 35 years. It’s wide ranging, deeply reported, historically grounded and ideologically restrained. To write “The Unwinding”, Packer clearly had to spend a lot of time out of his own habitat and in the company of other people, listening more than talking, and largely keeping his opinions to himself. Imagine that! It’s called journalism."

NPR: Stories Of Hope Amid America's 'Unwinding' -- "According to New Yorker writer George Packer, there used to be a kind of deal among Americans — a deal in which everyone had a place. 'People were more constrained than they are today, they had less freedom,' he says, 'but they had more security and there was a sense in which each generation felt that the next generation would be able to improve itself, to do better.' But over the last generation, that deal has come undone."

"So Ambitious" by Jay-Z (featuring Pharrell)

"We Take Care Of Our Own" by Bruce Springsteen 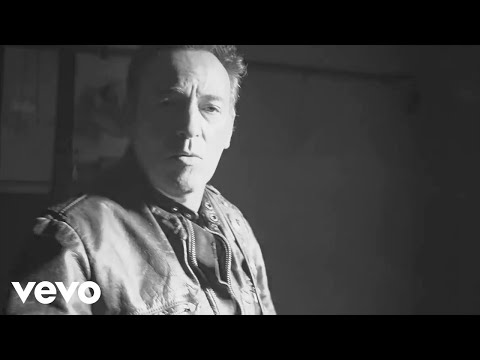 On Saturday, comedian Stephen Colbert addressed University of Virginia’s graduating students at its 2013 Valedictory Exercises.  His wife attended UVA as a student, but Colbert did not — his application to attend as a transfer student was rejected.

He joked about the university’s notable graduate Georgia O’Keefe, dropout Edgar Allan Poe and founder Thomas Jefferson.  He concluded with the mandatory advice section for graduates.

We'll end our show by playing this excerpt from Colbert's remarks:

You can also watch his full speech here: 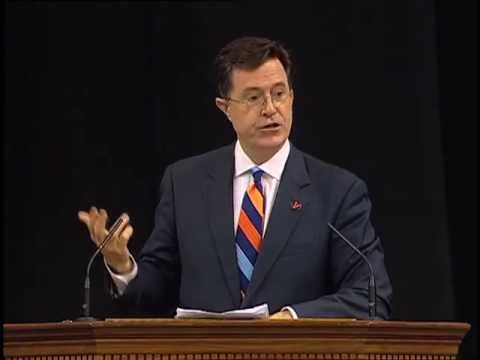