When we were preparing for our interview with music legend Tom Jones today, we joked around about the Welsh singer's notorious sexual allure. More specifically, we wondered: why do women seem to throw underwear at Jones at nearly all of his performances for decades? Naturally, our own Tom, host Tom Ashbrook, asked. Jones' response is below.

"It started in the Copacabana in 1968. The Copacabana was a night club in New York, and it was a supper club. So I was performing, and I was on the same level — the band was on risers , but I was on the same level as all the tables and chairs. And of course, the business was great, and the tables and chairs were getting closer to me all the time. I didn't have a lot of room left to perform. So I was perspiring a lot, and so people were handing me table napkins — you know wipe it off, hand it back.

So this lady stood up — you had to be careful because there were a lot of gangsters in this club, and so their wives and girlfriends, they would be there, so you had to tread lightly -- this one lady stood up, and just lifted up her dress and took her underwear off and handed 'em to me.

You know, I used to sing in clubs in South Wales, and if somebody throws something at you, you try to turn it to your advantage. So I wiped my brow with the underwear and handed them back and said, 'Watch you don't catch cold like that' and it just went from there.

But it became a joke then, people were bringing them in bags, saying 'There's Tom Jones, throw underwear at him!' There was a picture of a man who was a stage manager, with a big broom, just sweeping 'em all up. It backfired on me, because it turned out more of a joke than it turned out to be."

While it might have all been a sweaty joke, but it definitely wasn't a joke to our in-house Delilettes. A collection of WBUR staffers gathered in a studio to perform their own rendition of Jones' hit, "Delilah." The results are below for your listening and viewing pleasure. 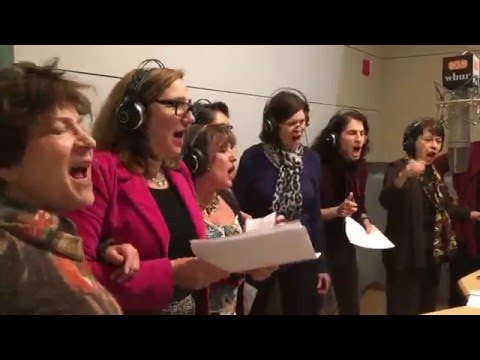