A black teenager sees a friend killed by a white police officer. That's the storyline of the new film "The Hate U Give." The director and young activists tell their stories.

George Tillman Jr., Film director, producer and screenwriter known for his films "Soul Food," "Barbershop," "Men of Honor" and "Notorious," among others. Director of "The Hate U Give." (@George_Tillman)

Kaia Hines, 16-year-old junior at Franklin High School, which is outside Milwaukee, Wisconsin. She’s a program coordinator at Leaders Igniting Transformation Milwaukee, a nonprofit organization led by youth of color that organizes young people around issues related to political power, and social, racial and economic justice.

Alycia Moaton, 17-year-old senior at Kenwood Academy in Chicago. Member and Organizer with Good Kids, Mad City, an advocacy organization that includes young people from Baltimore and Chicago who are working to end violence in their cities 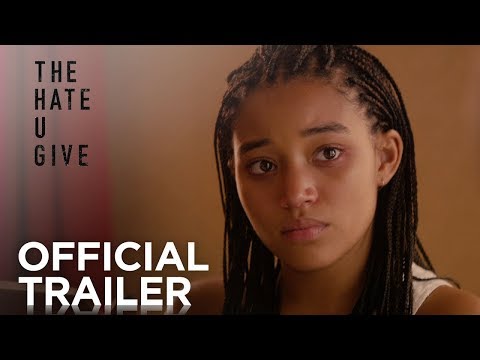 On how code-switching plays out

Kaia Hines: "Well, so I always went to [Milwaukee Public Schools], or not MPS, but school in Milwaukee because that's where I live. But when I started as a freshman in high school, I came over to Franklin High school and it was a whole new ballgame for me. Going from being around people all day who looked and talked just like me, coming here to people who looked completely different than me and have different lingo and different slang that I had. So I remember my freshman year, I would still talk like normal, or I would still use certain slang, and people would not understand what I meant by saying certain words, or I would just feel different for talking less proper than they did. So I kind of just started to teach myself that when I'm at school, I talk proper, I used proper English, and when I go home, I'm able to talk how I feel comfortable talking and use the slang that my family and fridges are used to."

Alycia Moaton: "I used to live in a suburb when I was younger, and so the transition from when I moved away to the city and how everybody speaks and how you had to act was like completely different. And so, because of the areas of where I worked at, I definitely have to experience the idea of code-switching because it's like, because you are black, saying these words and acting like this makes you appear as hood, or makes you appear as less educated than somebody else. So when you're around these people, even though we don't intentionally mean to do it, it just kind of happens subconsciously because you never want to be labeled as something like that. And so I resonate with Starr a lot because when I had to switch back and forth between both of my, mostly white communities and mostly populated with black communities, the way I spoke, the way I talked, the way I dressed, the way I acted was completely different. So I definitely can relate to the idea of code switching.

"I think it's definitely an extra burden that we have because for black people it's this idea of a double identity that we always have to face. ... I definitely think that it's way harder for a black person to find themselves, because we're always faced with having to fight so many negative stereotypes that are already approaching us in the first place. So I think if you're somebody who doesn't grow up being educated on the history of our people and learning about how to really truly love yourself for being black, and you're kind of just growing up in a world where if you're not hearing these things, but you're hearing, 'Black people are uneducated, they're this, they're that, they're hood, they'll never learn, blah blah blah,' it's kind of like — so what do I have to conform myself to to seem like I can make it? I think code-switching is definitely a burden for a lot of black people — especially a lot of young black people — because we're not fully aware of ourselves yet, so when we're faced and trying to be ourselves but then also faced and trying to please others, it does become an extra burden because most other people won't have to go through that. Because they're already the ideal of perfection in other people's eyes and we aren't."

"It's kind of like — so what do I have to conform myself to to seem like I can make it? I think code-switching is definitely a burden for a lot of black people."

Demitrius Doward: "It was this one night when me and my father, we was in the kitchen talking, and we was in the kitchen just talking about driving and stuff, and we got to the topic of police when we get pulled over. And we were talking about when the cops pull over, like he always puts his hands on the steering wheel, and he told me when I get older and get a license to do that. And a few months back, that happened, the cops pulled us over, and my father put his hands on the steering wheel, and I put my hands on the dashboard, too, because I was kind of nervous because, like the videos that I'd been seeing lately on social media about police brutality, and how graphic it can get."

KH: "I think that a big piece of maintaining your African-American identity is understanding that it's deeper than just being American, because I know a lot of people who don't like the term 'African-American' because they feel like they just want to be called black because they don't know their African background. But I believe that teaching them, if they don't have a specific Africa origin — like if they don't come from like Liberia, or Ghana or something — they don't have a specific piece, there are morals and there are African rituals and things that are all around. There are things that you can take from the African culture as a whole and apply it to their lives that will constantly remind them that they are more than just black. They have some type of background, or some type of depth that they can come from that will make them feel like they have some sort of identity. So just sharing music and culture and food and background information on just Africa in general, and how they've helped us, and how Americans had adapted things from African culture to form the culture that they call theirs today, I think teaching that to them on a daily basis will help them understand who they are as individuals, and who they are as African-American."

"I really hope that after watching the move people understand the frustration that we have."

On policing and community building

DD: "I think it's respect. I think we need to respect both sides. When I was 13, I had a experience with stop and frisk, and that put me to have a lot of fear. And the next two years, I always had fear for police.

"It was scary. I was walking around my block, and I was going building to building trying to find a friend. And these two policemen were following me, so I started kind of walking fast, because it was kind of scary. And they caught me around the corner, and they started to check my ankle to see if I had drugs or anything, and I had $20 because my pants didn't have pockets, and I was just shaking the whole time. And they said, 'Why are you scared?' And I was like, 'This never happened to me before.' So the next two years, every time a cop would cruise by me, I would just shake up."

On what people can learn from "The Hate U Give"

KH: "I really hope that after watching the move people understand the frustration that we have, because there's a lot of people in my school, and a lot of people who I know in general, who — I have a best friend, and she is really big on activism as well. And people look at us and they tell us that we are being over-dramatic, that police officers are good, that the person who was shot and killed shouldn't have done whatever they did. That people now justify the reason to die. People tell use we're being over-dramatic, or that we're overthinking it, or that we need to let it go, but I really hope that after seeing movie and actually seeing this happen, and seeing the aftermath of the situation — not only on Starr, but on her community — I hope that seeing that will allow them to understand exactly how we feel. And I want them to be able to stop being close-minded — and honestly being ignorant. I hope that watching the movie allows them to be able to just stand up and fight against the problem."

The Guardian: "The Hate U Give review – a defiant challenge to divided America" — "If ever a movie resonated with a news image it’s this one, with the extraordinary shot of nurse Ieshia Evans at a protest in Baton Rouge, Louisiana, in 2016, where she faced down three cops in full riot gear while wearing a flimsy frock. She did this with all the floaty calmness of Botticelli’s Venus. The Hate U Give is a fierce, dynamic movie with a terrific performance from Amandla Stenberg as Starr, a high-school student who becomes witness to a callous cop shooting, and her performance seems to be channelling some of the defiance and miraculous strength despite vulnerability in that famous picture."

New York Times: "Microaggressions at School? The ‘Hate U Give’ Team Has Been There" — "When Angie Thomas first began writing 'The Hate U Give,' her best-selling novel about a black teenager dealing with microaggressions and worse at a predominantly white prep school, she looked to movies for inspiration. 'I wanted "The Hate U Give" to be almost a girl version of "Boyz N the Hood,"' she remembered. 'That movie was a huge influence on me. And I was like, are there any movies from that era, or even currently, that deal with black girls in situations like this?' "

Vulture: "Amandla Stenberg Knew The Hate U Give Was a Success Based on the Number of White People Crying" — "Stopping by 'The Daily Show' With Trevor Noah Monday night, 'The Hate U Give' star Amandla Stenberg discussed the one clear-cut sign that, to her, meant the recently released film version of Angie Thomas’s YA novel about police brutality had triumphed. 'It’s meant to be a tool of empathy,' she said. 'And so far it’s been really successful. We’ve had a lot of white people crying after, which is great.' Laughed the actress, 'I’ve never seen so many white people crying before. It’s amazing.'

"Stenberg also touched on the film’s depiction of code-switching, racism, and police brutality. Of course, you’d think everyone would be able to empathize with victims of police brutality, but, unfortunately, that’s not the America we live in, which is why Stenberg and the movie’s makers hoped the movie would help humanize black victims to viewers who might only be exposed to police violence via the evening news. When asked by Noah what her hopes are for the film, \'beyond white people crying,' Stenberg laughed, 'White people crying actually was the goal.' "

This hour, On Point: We talk to the film’s director, George Tillman Jr., and then to three young African-American activists.

This article was originally published on October 19, 2018.