"To Kill a Mockingbird" took Broadway by storm. Tony-nominee Jeff Daniels joined in studio to discuss. 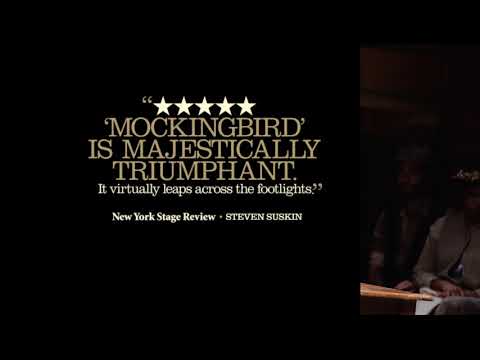 Jeff Daniels, Emmy Award-winning actor known for his roles in "Dumb and Dumber," "The Newsroom," "Terms of Endearment" and more.

He was nominated for a Tony Award for his role as Atticus Finch in "To Kill A Mockingbird" on Broadway. (@Jeff_Daniels)

On the complicated character of Atticus Finch, and who he is in the play

"He's the guy you go to to get something fixed or get a legal thing — you don't have the money and you can pay him in vegetables. He is kind of a touchstone — but he also sits on his porch. He also steers clear of it all. He doesn't get involved in changing Monroeville or changing — that's what's different about the play. Atticus comes to that. He's got a lot of good advice, but actually getting off the porch and going and changing things is something he comes to in the play versus you assume that he's just going to go save the day from Page 1.

"In the play, he's a small-town lawyer, gets paid in vegetables. One day the judge comes over and says, 'Will you represent this black guy who's accused, wrongfully, of raping a white woman, white girl?' And, he's got to get off his porch. And the guy is 100% innocent. And Atticus’ belief that there’s goodness in everyone, and your better angel will win out, much like it says in the Bible — the good in us will always overtake the bad. And that's not how it works out."

On elevating the tension of Atticus Finch and the story in the play, as compared to the book and previous film

"It's a different point of view. The book and the movie took Scout at the age of 8, I believe, and you're looking up. You’re looking up at Atticus. He's on Mount Rushmore. He's already on a pedestal, and we took the pedestal away. He still believes what he believes. He's still a very righteous man, a very decent man, a very honest man, but he's just a small-town lawyer who gets paid in vegetables. And one day, the judge comes over and changes his life. You come at Atticus in the play from eye level, versus looking up at Mount Rushmore. It's the same guy, but he becomes Atticus in the play. He isn’t Atticus on Page 1."

On how the play's conception of Atticus Finch was inspired by modern times, specifically President Trump's "both sides" response to white supremacists in Charlottesville, Virginia

"There isn't goodness in everyone, and I think that's certainly challenged today in 2019. And the better angel will not win out all the time. There is power, there is money, there is control, there is dominance and that has nothing to do with being empathetic.

"Atticus has to pick a side. He has to get off the porch. We need him now. We need his voice, and he's forced to do so by taking this case."

"The thing that a play can do that the movie and the book can't — you can't put it down. You can't hit pause. You can't come back to it later. You're in the room. They shut the doors. And when Tom Robinson is found guilty, you're in the room when he's found guilty. And everything that you feel about that —which is usually you can't believe it even though you know the story — being in the room when Gbenga [Akinnagbe, who plays Tom Robinson] has to get up and is handcuffed and led off to jail, and eventually the electric chair, you know where he's going.

"And you can see him in that long walk across the stage as they take him out after he loses the case. You feel it in a way that you don't necessarily feel it in the book and the movie. And that's one of the things we worked hard on with this play, was I want you to feel it. I want you to get hit with it. I want you to walk out changed, and seven months of performances, and people are walking out changed."

Time: "Jeff Daniels Plays a Hero on Broadway. He’s Still Waiting for One in the Real World" — "The day is cloudy and so is Jeff Daniels. The actor has walked to Central Park directly from watching the news conference in which Attorney General William Barr defended President Trump in the moments before the release of special counsel Robert Mueller’s report, and it has done even less for his mood than the drizzle that arrives at the park entrance with him.

"'I’m waiting for the hero,' Daniels growls, after sitting gamely for a portrait with the two Australian shepherds he has come to walk. The older one, Magglio, is named for a Detroit Tigers outfielder his daughter had a crush on in high school. Scout joined the family last summer after Daniels signed on to play Atticus Finch in a new Broadway production of To Kill a Mockingbird. Aaron Sorkin adapted Harper Lee’s 1960 novel for the age of Trump, and the show’s roaring success is fueled by the steady combustion of liberal sensibilities and the kind of news Daniels is stewing over.

"'It’s exactly what Mockingbird is about,' he says of Barr’s news conference. 'You know, it’s about, where’s goodness and decency? It’s respect and honesty and truthfulness and "do unto others." Where is that? I didn’t see it this morning. I haven’t seen it for two years.' He pauses to pick up after one of the dogs. 'But the country is divided between people who want to believe it and people who don’t believe it. Dangerous times.' "

PBS NewsHour: "How Jeff Daniels steps into Atticus Finch’s shoes" — "Atticus Finch is one of the most recognizable characters in American literature. The small-town Alabama lawyer from Harper Lee’s classic novel, 'To Kill a Mockingbird,' has gotten an update on Broadway, more than half century after the book was published.

"Set in the 1930s, the story centers on Finch’s defense of Tom Robinson — an African-American man wrongly accused of assaulting a white woman — and offers lessons about race, class, injustice and morality. The new take on 'Mockingbird,' which opened in December, comes from famed screenwriter and showrunner Aaron Sorkin.

"Jeff Daniels stars as Finch. He’s best known for roles in movies like Sorkin’s 'Steve Jobs,' 'The Purple Rose of Cairo' and 'Dumb and Dumber,' as well as TV shows like 'The Newsroom' (another Sorkin project) and 'The Looming Tower.'

"Last week Daniels was nominated for a Tony Award for his portrayal of the 'upstanding' lawyer. Daniels said it was the 'role of a lifetime.'

"'You go out before that closing argument, you can just feel yourself change,' Daniels said, describing what happens when he’s on stage for the story’s climatic courtroom scene. 'You stand up straighter, and there’s a thoughtfulness. Now it’s like you’re inside the suit, inside the guy.' "

Variety: "How ‘To Kill a Mockingbird’ Beat the Odds to Deliver a Broadway Smash" — "Jeff Daniels slumps into a chair in the Shubert Theatre, grasping an oversize Starbucks and looking bone-crushingly exhausted. His eyelids are heavy, and he seems like a man in desperate need of rest.

"It’s easy to understand why. It’s late March, and Daniels has just given his 100th Broadway performance as Atticus Finch, the small-town attorney immortalized in Harper Lee’s 'To Kill a Mockingbird' and in the 1962 Oscar-winning film of the same name. That’s in addition to the 45 preview performances that Daniels and the cast spent fine-tuning playwright Aaron Sorkin’s radical adaptation of the book that was published nearly 60 years ago. Not to mention the three workshops that took place before the show ever made it to Broadway. But Daniels, who is in the third month of a yearlong commitment, won’t be getting a break anytime soon.

"'I don’t want to miss a show,' he tells Variety. 'They came to me a few weeks ago to see when I wanted to take a vacation this summer, and I asked if they were selling tickets. They go, "Oh yeah, they’re going out the door." And I’m thinking people are paying how much for these seats? I’m not going to announce that I’m leaving for two weeks in July.' "

Adam Waller Freelance Producer
Adam Waller is a freelance producer for On Point.