Meghna Chakrabarti: Tell us what you think is wrong with the Warren campaign.

Dan Payne: It's her advertising. Her television commercials seem to turn off people. Women have told me they find her hectoring, they don't like her attitude, she's school marmish. These are the opinions of people who support her.

It seems to me that "hectoring, school marmish" — those are criticisms based on the image that's being projected in her advertising and not necessarily of her policy or how she may or may not be connecting with people on the campaign trail.

Right. When she works a room, when she gives a talk, it's a completely different dynamic. People who have seen her in person think she's wonderful. Those who only know her through TV have real questions.

You wrote that Warren's vocabulary is coarse, that she says things like, "Small business owners bust their tails every day," in one of her ads:

And you say that at the Democratic National Convention, she tried to convey toughness with words like rigged, hammered, corrosive, for example. "For many years, our middle class has been chipped, squeezed, and hammered," she said: 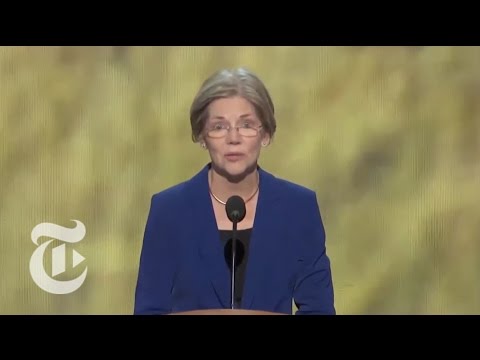 These aren't necessarily phrases you'd expect to hear from a Harvard law professor. But on the other hand, she grew up on Oklahoma, in a struggling middle class family. Maybe this is her?

It's possible that she talks like this all the time. But if it's intentional, it reflects a desire by the campaign to not sound like a Harvard professor, to sound like she can talk street talk with the best of them. I think she's trying to say that she feels strongly about these things, but it just comes across in many cases as coarse.

On the other hand, you admit politics is like high school, how you dress and act defines you socially, and you want to see her dress in a more modern way, lose what you call "the granny glasses," get a different haircut. It seems like these issues leap to the forefront with much greater speed when we're talking about women candidates.

Sure, it's possible. Well, you do hear it occasionally about men. I think people complain about Romney not being able to connect. When he tries to go off the cuff, he makes mistakes. He says things like, "Ann drives a couple of Cadillacs."

We've only got under two months left until the actual election. Say her campaign is actually reading your commentary or listening to us. What if they did make these changes?

I like to think I performed a service. I think I told them things...maybe they had not heard before in this organized way.

If indeed any changes were made now, wouldn't Warren be accused of being inauthentic?

I'm asking her to be more authentic. I want her to just sound like a human being, not read the script that makes her sound like some angry, hectoring school marm. But I hate to say it, about politics, but we live in a celebrity-based society, so a candidate for high office is considered a celebrity as well as a political figure. And so you're judged as a celebrity is judged: by the way you present yourself.

I can imagine there are those out there throwing up their hands saying, "This is exactly what needs to change!" judiann1 wrote on wbur.org:

We need a government full of people like Elizabeth not an actress with a shiny veneer.  We have a Congress full of these things.

This is exactly what is wrong with our current system, so far removed from basic democratic principles and issue-based voting. 'Get New Glasses'?! 'Soften the Hair'?! Shame on you guys for perpetuating such a laughable, ridiculous system.

In general, you have to go with the flow. If people really believe they want to know something about you that goes beyond your name, party, issues — they want to know about your family, they want to get a feeling for you as a human, you have to do that, you have to respect the voters where they are. Now maybe that's trivilaizing poltiics, but you can't simply do commercials that say this is what I believe, this is what the other person believes and go back and forth like that. It just isn't basically a useful way to communicate.

Payne also mentioned that the Warren campaign has made some improvements in how they portray her. In her latest television ad, for example, Payne noted that a narrator explains Warren's motives: