The Democratic primary candidates for Massachusetts auditor met Wednesday morning at WBUR for their first debate ahead of this year's statewide election.

Do you want to know more about this year's statewide primary? Here's our comprehensive voter guide to answer all your questions, from how to vote to who is running.

Chris Dempsey and state Sen. Diana DiZoglio discussed their respective visions for the role inside WBUR's studios in hopes of winning over voters ahead of the Tuesday, Sept. 6 primary.

It is the first in a series of five debates for statewide elections hosted by WBUR in partnership with WCVB Channel 5 and The Boston Globe. Tiziana Dearing, host of WBUR's Radio Boston, moderated Wednesday's debate.

Dempsey is a former assistant transportation secretary best known for helping to lead the fight against Boston's bid to host the 2024 Summer Olympics. DiZoglio, who lives in Methuen, was elected to the Massachusetts Senate in 2018 after serving six years in the House.

The winner of the Democratic Party primary will likely face off in the November general election against Anthony Amore, the only Republican candidate for the open seat. Democrat Suzanne Bump, who has held the role of auditor since 2011, is not seeking reelection.

You can watch the debate below. 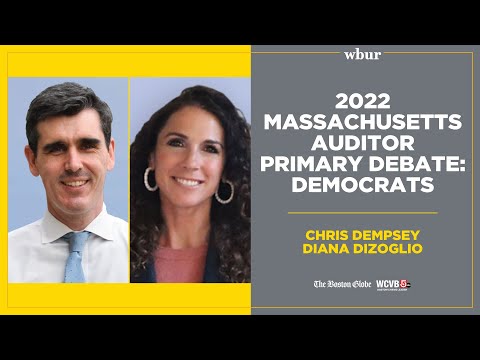 Here are highlights from the candidates' remarks throughout the debate, lightly edited for clarity.

To kick off the debate, candidates were given about one minute to deliver opening statements. The order in which the candidates spoke was chosen at random.

DiZoglio: "I'm a current state senator running to be your next state auditor to ensure that working families like ours get access to, and accountability from, our state leaders and our state agencies, regardless of our family background or our bank balance or our zip code.

"I was born to a 17-year-old-single mom, grew up housing insecure, cleaned houses and waitressed my way through community college, and then earned scholarships to Wellesley College to become the first in my family to graduate. I know what it's like to struggle and to have to be scrappy and without the investments made through state government and the investments of others, I would not have had the opportunities I did. So I know how important it is that our investments made through your tax dollars are spent wisely, because every wasted dollar puts another child's future opportunities at risk."

Dempsey: "I'm the son of public school teachers. And I saw my parents digging into their own pockets to pay for school supplies for their students, as we know, public school teachers across the commonwealth do to this day. My parents taught me the importance of public service and that facts matter, and that led me to a career working for Governor [Deval] Patrick as assistant secretary of transportation. I'm the only candidate in this race with experience making our state bureaucracy work better for all of us.

"But, I've also stood up to protect the public interest. As the co-founder of the grassroots No Boston Olympics, where we went up against corporate industries and titans, who were pushing a wasteful Olympic bid that would have cost all of us $15 billion. I'm proud to be supported and endorsed in this race by the mass Democratic Party and by incumbent state auditor Suzanne Bump."

On transparency and accountability

DiZoglio: “... Right now, our committee votes are not made public. We're not subject to the public records laws. Taxpayer-funded NDAs [nondisclosure agreements] continue to silence government workers about abuse potentially happening in our state government. I find that to be unacceptable, and I have led the charge on issues such as banning taxpayer-funded nondisclosure agreements, something that my opponent voted to uphold in the town of Brookline as a Brookline town meeting member. ... ”

Dempsey: "... I'm the first candidate in this race to put out a policy paper of any kind about what I'm going to do in the office: one was on carbon accounting, to make the office the first in the country to do that so we can hold agencies accountable to the carbon emissions goals that we have. I also put out a 15-point plan for reform of the Massachusetts State Police. We need more oversight of that agency, and the state auditor is one of the few elected officials on Beacon Hill that can do that."

On the role of state auditor

Dearing asks the candidates what differences they see between the roles of the auditor and the attorney general in ensuring accountability and transparency.

Dempsey: "... We need a team effort on Beacon Hill. ... The auditor is not a law enforcement body, so we do not have the ability to take people to court in the way that the attorney general does. It has to be a partnership.

"... The role of the state auditor [is] to dig into the executive branch, to figure out what's working and what's not working, and how things need to change and put that information in front of us."

DiZoglio: "... The AG is the enforcement branch. For example, the state auditor looks at issues within EEC [Department of Early Education and Care], DTA [Department of Transitional Assistance] and MassHealth, and when they uncover potential fraud or abuse in the system, those cases are then referred over to the attorney general's office for any sort of prosecution that might need to occur. So, the auditor shines the light, and then the AG enforces.”

On the MBTA and safety

Dearing brings up reports the T and Gov. Charlie Baker were expected to announce a full shutdown of the Orange Line for 30 days later Wednesday. She asks the candidates to answer, in one sentence, whether shutting down this many lines at once is the best way to improve performance.

Dempsey: "Absolutely not. This is Governor Baker waving the white flag after eight years."

DiZoglio: "No, and we need a safety audit of the MBTA. And I'm the only candidate in this race to commit to doing one."

Dearing: "... The Federal Transit Administration is already doing a safety check, we're expecting report from them. Given [the backlog of audits before the office] why is this the best resource and focus at this time?"

DiZoglio: "We need a state-level report to get to the bottom of how we can, in state government, make our transportation system work more efficiently and effectively.

"... I am proud of the work that I've done, leading the charge in my district, being the first to sign the initiative to support the Fair Share Amendment on the upcoming ballot, which is a progressive way to fund our transportation system. I voted for that four times."

Dempsey: "... [The auditor's office] does not have the resources to inspect concrete or to assess what the operations control center at the MBTA is doing or not doing.

"The better approach — the more prudent one — is the one I've suggested, which is to take the FTA's recommendations and then see whether the MBTA is following those recommendations or not. That is the work of the auditor's office: to see where the gaps are between what's on the books and what's actually happening."

Dearing: "With a state agency that size and with this many safety issues, why not make the auditor's office — who's responsible for transparency and investigations — look at safety?"

Dempsey: "It absolutely will look at safety. But you can't just say, 'I'm calling for a safety audit' as a press release without any details about how you would actually do that. I've been in the tunnels of the system. I've been to the operations control center. The people who work in the auditor's office do not have the expertise to do that."

DiZoglio: "I plan on conducting a safety audit. That was something that our Republican challenger also committed to doing. And it's something that the Carmen's association, that the MBTA Inspectors Union, and that the machinists and the workers of the MBTA stand with us on."

On the incumbent state auditor

Dearing says current Auditor Suzanne Bump is retiring after more than a decade and has endorsed Dempsey in the race. She asks the candidates what they each feel Bump has done well, and what they would carry forward if elected.

Dempsey: "... Auditor Bump has done a great job, and I'm really proud to have her support in this race. Even she said when she announced her retirement that she believes that the next generation can do more with the powers of the office to make it a real force for good within government. Everywhere I've gone, whether it's transportation for Massachusetts or No Boston Olympics, I've taken the platform that's there, expanded it, and made change in state government."

On the platform of Republican candidate Anthony Amore

Dearing: "Amore has said that one of his priorities would be to audit the auditor's office. His campaign website includes the following: 'Over the past 12 years, the number of annual audits performed by the auditor's office has steadily declined. As a result, Massachusetts residents have seen government failures that could have been prevented.' Aside from the MBTA or the state police, is he correct?

DiZoglio: "... One of the first things I do entering the state auditor's office is request a peer review by the National State Auditors Association of my office. That is how our auditors' offices get audited, to make sure that there is an independent review. That will be one of the first things that I do.

"We need to make sure that the office that is in charge of accountability in the state and bringing more transparency and making sure that there's oversight regarding the abuse of taxpayer funds is not itself abusing taxpayer funds."

Dempsey: "I certainly agree that the organization should have a top-to-bottom review. I would do that with any organization that I would take control of and oversee. ... The senator mentioned the State Auditors Association. Auditor Bump is the past president of that organization, and she has received recognition and awards for the success of her office. ... She was not expecting to weigh in on this race when it started, but she said she has compared the statements of the candidates, and she is strongly with me in this race."

Dearing: "Who is on the Boston sports Mount Rushmore?"

Dempsey: "Bill Russell, who we lost this past week and who was a legend, not just on the court, but off the court. I'd put the 'GOAT' [Tom Brady ] up there as well. I put Bobby Orr up there and from the [Boston Red] Sox, let's go with Big Papi [David Ortiz]."

DiZoglio: "Back in the day, I was able to go to a lot more baseball games than I am right now. I absolutely adore Pedro Martinez. ... I would say Tom Brady. And the third one I'm going to have to think about."

This article was originally published on August 03, 2022.

This segment aired on August 3, 2022. The audio for this segment is not available.