It mattered less that Scott Brown had barely lived in New Hampshire than that he had no idea who does.

Voters in the Granite State are worried, not panicked, about the rise of the Islamic State in Iraq and Syria. They are anxious, not apoplectic, about the global threat of Ebola. They are less alarmed than they are apprehensive about security on the nation’s borders.

It was a pragmatic electorate with a fully developed sense of proportion that re-elected Jeanne Shaheen to a second term in the United States Senate. Commuters who get to work on a widened I-93, corrections officers at the new federal prison in Berlin, workers at the Portsmouth Naval Shipyard, all of them beneficiaries of the incumbent Democrat’s advocacy on Capitol Hill.

Voters in the Granite State are worried, not panicked, about the rise of the Islamic State in Iraq and Syria. They are anxious, not apoplectic, about the global threat of Ebola. They are less alarmed than they are apprehensive about security on the nation’s borders.

Hysteria proved to be a misguided campaign strategy for the Republican refugee from Massachusetts.

“It’s real. We need to be very safe,” Brown warned, promoting a travel ban with West Africa that public health officials have rejected as counterproductive, isolating the very region in dire need of our medical intervention.

“She calls it fear-mongering. I call it a rational fear that is real,” he said, raising the specter of enterovirus-carrying terrorists, drug-running criminals and job-stealing Mexican migrants infiltrating the United States through a porous southern border.

Juarez is a long way from Sullivan County, the location of which was a mystery to Brown in his last debate with the only woman ever elected as her state’s governor and senator. James Pindell, the WMUR reporter who pressed Brown during that debate to identify the biggest economic challenges confronting that county, deserved a raise, not the wrist slap he got from his spineless broadcast bosses, for exposing Brown’s ignorance of the state he moved to less than a year ago. 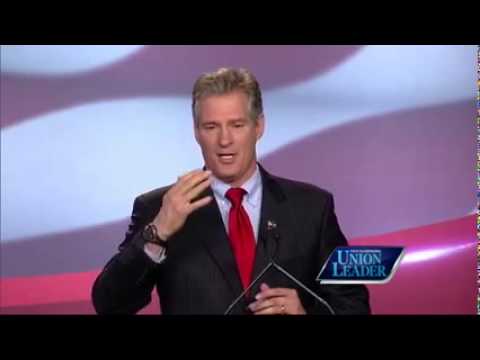 The candidate who touted his bipartisanship in every southern suburb and upcountry hamlet ran a race scripted by national GOP operatives and funded by wealthy corporate interests. Replicas of the fear-mongering ads promoting Brown were on the air touting Republicans in North Carolina and Iowa and Colorado where tying Democrats to the unpopular president proved a winning formula.

It didn’t work in stubbornly independent New Hampshire, not because Granite State voters are not disillusioned with the president they elected twice — they are. But the name on the ballot yesterday was Jeanne Shaheen, not Barack Obama. They know the woman who was their governor for three terms before they sent her to the Senate in 2008, back before the barn coat and the pickup truck, back when Scott Brown was still an anonymous and spectacularly undistinguished state senator in Massachusetts.

If Shaheen did “vote with Obama 99 percent of the time,” voters might well have questioned a vote or two, but few doubted that she cast those votes in her best judgment, not in response to marching orders from the White House or from anyone else. It was Shaheen, not Brown, who insisted during this campaign that the president would need congressional approval to commit U. S. ground troops in the battle against ISIS.

The candidate who touted his bipartisanship in every southern suburb and upcountry hamlet ran a race scripted by national GOP operatives and funded by wealthy corporate interests.

Toadyism is the kiss of death in the Live-Free-Or-Die state. That’s why Brown lost. He is the consummate toady. A creation of Cosmopolitan magazine. Of the Tea Party. Of Karl Rove. Of Fox News. Of the Koch Brothers.

He had a good ride. His good looks and good timing took him farther than he could have imagined when he was writing wills in Wrentham. Were he a pragmatic Granite Stater, instead of a peripatetic politician, Brown would park the pickup and hang up his shingle. But perhaps other races beckon. Democratic Senator Patrick Leahy plans to stand for re-election in two years. And, now, Brown knows how to get there. Vermont is just across the Connecticut River from Sullivan County.