103°F. Sweat drips from your burning forehead onto the thermometer. After a night of vomiting and muscle aches, you grab your phone to call for help.

Hours later you're at the ER, but not in a hospital bed receiving treatment. After a thorough physical exam, you’re discharged with a colorful pamphlet titled “Road to Recovery,” and a list of treatment facilities.

An impossible scenario with pneumonia? Yes. You’d be given antibiotics.

But show up at an ER with similar symptoms from opioid withdrawal, and this is exactly what will happen. A drug to treat opioid use disorder safely and effectively exists — but few ER providers prescribe it.

I’ve been working with a team of Harvard researchers, designers and physicians to discover why. From interviewing providers in Boston, I learned that many believe, as one told me, that opioid addiction is “a social issue, not a medical issue." He told me, "This should be handled by a social worker.” Many doctors are trained, starting in medical school, to treat drug addiction by referring patients to detoxification programs for psychological treatment first.

We know, however, that psychological treatment for addiction — when given by itself --  often fails. Research has found that compared to those treated with medication, patients suffering from opioid addiction who receive only psychological support were twice as likely to die from overdose.

I learned that many (doctors) believe, as one told me, that opioid addiction is "a social issue, not a medical issue."

Opioids caused more deaths in 2015 than HIV/AIDS did in 1995, at the height of that epidemic. Last month, President Trump declared the opioid crisis a national public health emergency. In 2016, the Massachusetts Department of Public Health reported over 2000 deaths due to opioid-related overdose.

So why are are we clinging to old ideas when we have a drug — buprenorphine — that can help? When patients suffering from opioid use disorder are in withdrawal, they suffer severe flu-like symptoms and start using again to escape those symptoms. Buprenorphine, often combined with naloxone, works to stabilize patients. Buprenorphine prevents withdrawal symptoms while naloxone protects against further cravings. The latest research shows that the evidence is clear: Treatment with buprenorphine reduces death among patients with opioid addiction.

Counterintuitively, I found in my research that a major barrier to prescribing buprenorphine is the Drug Addiction Treatment Act of 2000. The law amends an obscure law passed in 1914 — yes, 1914 — called the Harrison Narcotics Act. The act stated that physicians could prescribe medications structurally similar to opioids to patients in the course of normal treatment, but not for the treatment of addiction.

The 2002 update to the law required providers to obtain a waiver before prescribing buprenorphine, which involves a fee and an eight-hour course. So now the same law once intended to save lives is making it harder for providers to save lives. Currently, only 1 percent of ER providers nationwide are waivered.

Amending the law will take time. Meanwhile, there’s a simpler, faster way to help patients: change clinicians’ behaviors. In our research, I found ER clinicians had three common concerns: 1) Time: the eight-hour training required for the waiver, and 2) Culture: If no one else prescribes buprenorphine, why should they? 3) Visibility: It's hard to know if buprenorphine works because patients treated successfully don't return to the ER.

We can change this norm by learning from behavioral economists like Richard Thaler, the 2017 winner of the Nobel Prize for Economics and co-author of the bestselling book "Nudge." We've watched behavioral economics work on other public health problems like getting patients to take their medications and providers to wear gloves.

Using principles such as social norming and increasing salience, the Massachusetts General Hospital Nudge Unit is leading the way to help increase the number of physicians who prescribe buprenorphine.

Editor's note: Why isn't medication to treat addiction always offered in ERs? This same question was asked during a Facebook live in WBUR's "Living The Opioid Epidemic" group. The answer is a complicated one, says Northeastern researcher Leo Beletsky. Join the group to hear the full conversation with reporter Deborah Becker. 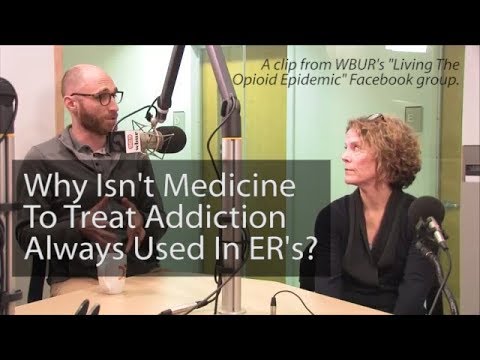